No simple answer to bear deaths on rails

After a five-year joint research project between Parks Canada and Canadian Pacific Railway to look specifically at grizzly bear deaths on the rail line, studies have shown there is not a simple solution to the problem.
Jan 26, 2017 12:00 AM By: Rocky Mountain Outlook 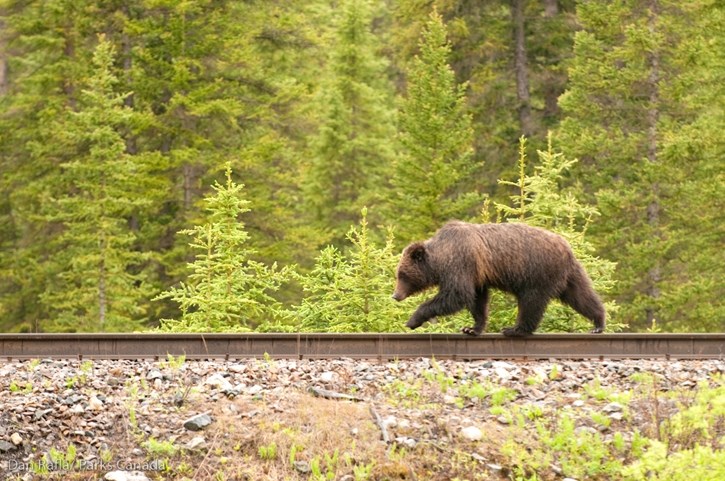 A grizzly bear travels along the CP Rail right of way in Banff National Park.

After a five-year joint research project between Parks Canada and Canadian Pacific Railway to look specifically at grizzly bear deaths on the rail line, studies have shown there is not a simple solution to the problem.

For the Rocky Mountain National Parks, the role of highways was for a long time the leading cause of mortality for grizzly bears, but with fencing of the Trans-Canada and millions invested into under and overpasses, it is the railway that transects the mountains from east to west that has become the major concern for conservationists and wildlife managers.

CP and Parks launched a joint initiative in 2010, with $1 million invested by the railway company, to address the issue and reduce the number of bears killed on the tracks by trains, along with a team of researchers from the University of Alberta and Calgary.

Colleen Cassady St. Clair, biologist and project leader from the University of Alberta, said at a press conference on Wednesday (Jan. 25) that after five years of research there is no single, simple reason for why grizzly bears sometimes are struck by trains and killed.

From grain on the tracks, bears that don’t seem to hear a train coming, bear attractants and food sources along the rail line, to the actual amount of time spent on the tracks, she said no single causal factor could reliably predict mortality.

“When we put all of our information together, it seems that the vulnerability to train strikes of bears is not a simple probability of the time they spend on the rail,” St. Clair said. “In fact, we think it is more likely that bears that are more vulnerable are the ones that for one reason or another do not detect oncoming trains soon enough to avoid a panicked and ineffective reaction.

“We think collisions are more likely to occur where track configuration and topography, aspects of human use and a remarkable diversity of smaller factors combine as a kind of perfect storm, if you will, to dramatically increase vulnerability.”

Acting superintendent for Lake Louise and Yoho Rick Kubian said that a real outcome that Parks Canada is proud of as a result of the five-year project is the stronger relationship created between the agency, CP Rail and researchers. He said he hopes that by sharing the research through an open house Wednesday night and presentations Thursday (Jan. 26) morning that it can result in improvements within a broader landscape context.

“There are a lot of ecological problems, they are really complex and this one was and we recognized that at the beginning,” Kubian said. “The science-based results the research has outputted have highlighted there is no single solution to this problem and that is a key message we want to get across, that there is no single silver bullet, if you will.”

Kubain said Parks Canada’s actions as a result of the research would focus on vegetation management issues – including continuing to use prescribed fire to create habitat that is more attractive for bears away from the railway.

Part of that work involves clearing attractants and food sources, but it also involves creating alternate travel routes for grizzly bears and other wildlife in areas considered to be pinch points for movement and where bears have been struck in the past.

“One of the findings of the research is that vegetation can play a significant role in these incidents, both by drawing bears to the right of way where buffalo berries and other foods are found in close proximity to the tracks, and by preventing bears from getting out of the way of trains such as in areas of heavy brush or tree growth,” said Van Humbeck.