Parks Canada is trying to track down the owners of two dogs that attacked and seriously injured a young mule deer in the Banff townsite on Saturday (April 30).
May 5, 2011 12:00 AM By: Rocky Mountain Outlook 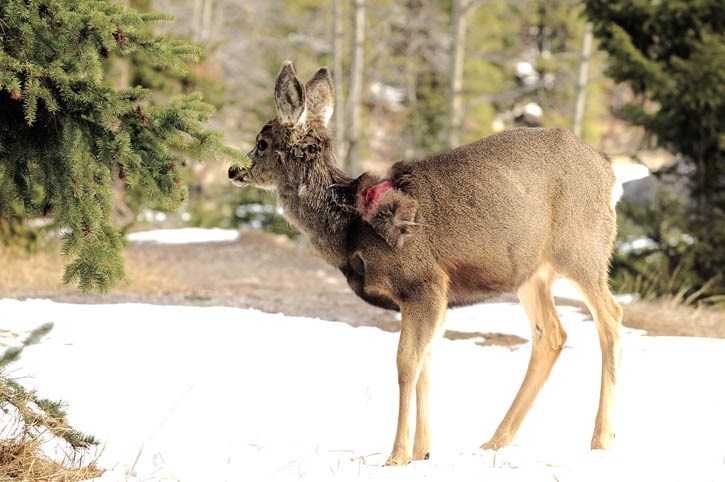 Parks Canada is trying to track down the owners of two dogs that attacked and seriously injured a young mule deer in the Banff townsite on Saturday (April 30).

And park resource conservation officers want to remind people that it is within their authority to destroy domestic animals that attack the national park’s treasured wildlife.

In this case, the deer had several lacerations to its neck, chest, head and right rear leg. Wildlife officers did not destroy the injured animal, but continue to keep a close eye on it.

“It was fairly disturbing for people that watched it,” said park warden Steve Anderson, a member of Banff’s law enforcement team.

“We have an investigation on the go and we’re looking for any information that could help us find the dogs and their owners.”

The two off-leash dogs chased the young mule deer from the Middle Springs residential area down Mountain Avenue before jumping it near the park administration building.

A cab driver stopped his vehicle in the middle of the road and he and his customer chased the dogs away. The deer continued down towards the river near Glen Avenue and the dogs disappeared up the hill.

“None of the witnesses had indicated that someone was taking them for a walk, so they were definitely at large,” said Anderson.

The two dogs were wearing collars and both are described as medium in size. One is white in colour with longer hair, and has brown or black spots in its coat. The other is described as a golden lab.

Steve Michel, a human-wildlife conflict specialist with Banff National Park, said a decision was made against destroying the deer; choosing instead to give it a chance for survival.

“It had pretty significant injuries, but the animal was mobile and moving around well,” said Michel.

“A decision was made to monitor the animal and not destroy it at this time to see if it is able to recover from those injuries.”

Michel said there appears to be an increase in the number of dogs off-leash in and around the Banff townsite – and Parks wants to remind people to keep dogs on leash at all times.

“A lot of residents perceive that behaviour to be harmless, that it’s a victimless situation,” he said. “But instances like this remind us that dogs can, and are, directly responsible for wildlife deaths each year.”

Michel said many dogs have an automatic predatory response to give chase when they see fleeing wildlife.

“Certainly, when travelling together, a couple of dogs can develop a pack mentality and behave quite aggressively in ways owners don’t realize they’re capable of,” he said.

Michel said wildlife such as deer and elk are in quite poor condition at this time of year, especially after a long and difficult winter, and simply don’t have extra energy reserves.

“Beyond an incident like this with injuries, the extra energy expended when fleeing can literally mean the difference between life and death,” he said.

Michel also wants to remind visitors and residents that Parks Canada has the authority to destroy dogs at large.

“If park wardens observe dogs attacking wildlife in the national park, they will exercise that authority,” he said.

“The only acceptable place to have a dog off-leash is inside a fenced yard. There is no other option in Banff National Park at this point.”

Michel said there have also been several incidents in the last few weeks involving deer being fed, including with bananas and food scraps.

“The law enforcement staff are investigating a couple of different situations,” he said.

“Just because deer are around in yards and looking like they’re hungry, it’s not an appropriate reaction in town.”

Anyone with information on the dogs attacking the deer, or of people feeding wildlife, should contact Parks Canada’s dispatch office at 403-762-1470.

In Canmore, Fish and Wildlife officers are asking for the public’s help after three dogs were spotted chasing a herd of bighorn sheep behind the Alpine Club of Canada clubhouse.

Two boxers and a German shepherd cross – all off-leash – were photographed harassing the bighorn sheep herd on April 24.

The photograph that was given to wildlife officials illustrates three dogs in a full run pursuing about 30 bighorn sheep on a steep slope not far behind the Alpine Club. The incident occurred between Town of Canmore and Alberta Parks Land.

Fish and Wildlife Officer Dave Dickson said the dog owners face a charge under the Wildlife Act for allowing a dog to pursue big game.

Bighorn sheep are extremely vulnerable at this time of year as they are low on fat reserves, according to wildlife officials. Many of the ewes are pregnant and undue stress caused by a chase could cause them to lose their young.

Anyone with public information is asked to contact Fish and Wildlife at 403-678-5508.