Father Nathan Siray said the $14 million project expects to wrap up in the spring of next year (2020), with the final touches – including a large stain glass window – to be added around the same time
0
Sep 11, 2019 10:03 AM By: Alana MacLeod 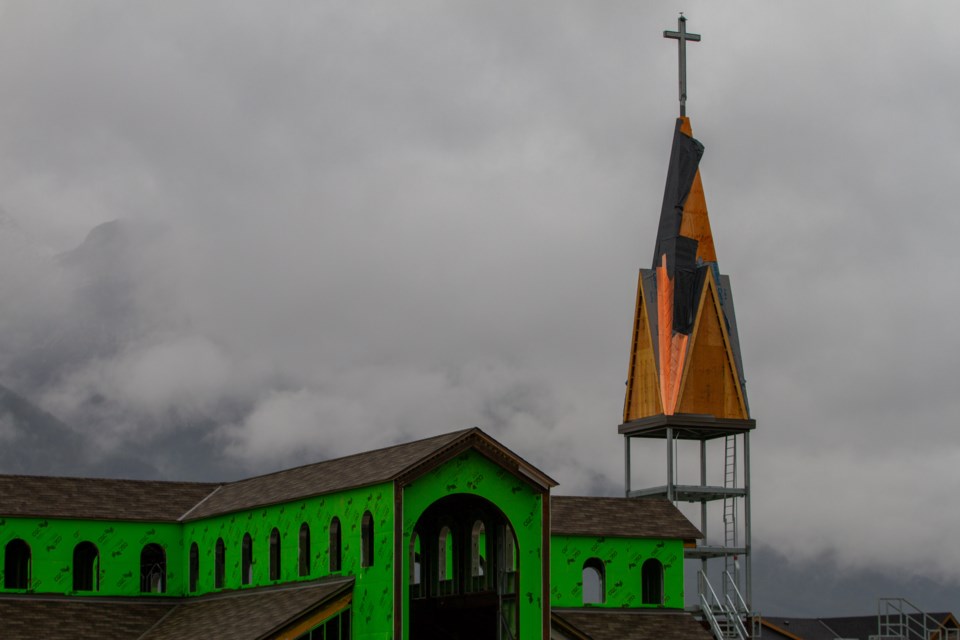 Our Ladies of the Rockies Roman Catholic Church currently under construction along Palliser Trail in Canmore. EVAN BUHLER RMO PHOTO

CANMORE – The ongoing construction of Our Lady of the Rockies Roman Catholic Church is on track despite a few hiccups and an architect change along the way.

Father Nathan Siray said the $14 million project expects to wrap up in the spring of next year, with the final touches – including a large stained glass window – to be added around the same time.

“Since the beginning of March when they started putting up the steel, it’s actually put us quite a bit back on schedule. So as of right now, we’re projecting it’ll be completed by spring of next year,” Siray said.

“We’re on a good track now… But for sure, it took a long time to get there.”

Siray said the project was initially taken on by architect Ron Boruk, but has since changed hands and is now under the purview of Norr, a company based out of Calgary. When asked what occurred, Siray said “that’s just how it happened.”

The new Catholic church was granted its building permit at the end of June 2017 and was originally projected to be a $9.2 million project. It grew to $11 million and now it’s $3 million more, which Siray explains is due to enhancements meant to increase the longevity of the church.

“Our projected costs in 2017 increased due to enhancements we decided to make to the building, such as using steel for its superstructure and improvements to the exterior and interior finishes of the church, because we want for this church to last for 200 years and using quality and beautiful materials was important to our community,” said Siray.

“It has been very impressive the way our community has arisen to this challenge to fundraise our costs and be part of building what will be a beautiful church, built on quality materials, not only for Catholics in Canmore, but our entire town and the many visitors we look forward to welcoming.”

One of the more exciting aspects of the church is the stained glass window, currently being made by a company in Atlanta, Georgia called King Richard.

“It is a unique composition … At the centre of the image is a depiction of Mary and the child Jesus and she’s looking very much like a queen. And the Three Sisters will be featured at the top of the window. There’ll be a little coalmine shaft to honour our heritage here in Canmore – the mining heritage. It has a few deer drinking from the stream … We’ve been trying to incorporate some of the natural beauty of the Bow Valley into the image.”

Sitting on Palliser Trail at the bottom of Silvertip trail adjacent to the Trans-Canada Highway, the new church is 18,319 square feet in size and provides 422 seats and space for future expansion of another 128 seats. Thirty of those seats will be in the Blessed Sacrament Chapel and 160 in overflow seating in the narthex whenever needed. There is also a parish hall planned with a capacity of 192 people, the potential for another 1,000 square feet of meeting space on the second floor and additional expansion capacity at the west end of the building.

Currently, parishioners of Our Lady of the Rockies Roman Catholic Church have regular weekend service (Saturday evening and Sunday morning) at Our Lady of the Snow Catholic Academy. For more information, visit
www.rockiesparish.com.