Parks Canada plans to crack down on illegal campers and hire more staff this year in a bid to give wildlife a better chance of survival, particularly in light of wolf deaths in the Bow Valley last year.
Jan 26, 2017 12:00 AM By: Rocky Mountain Outlook 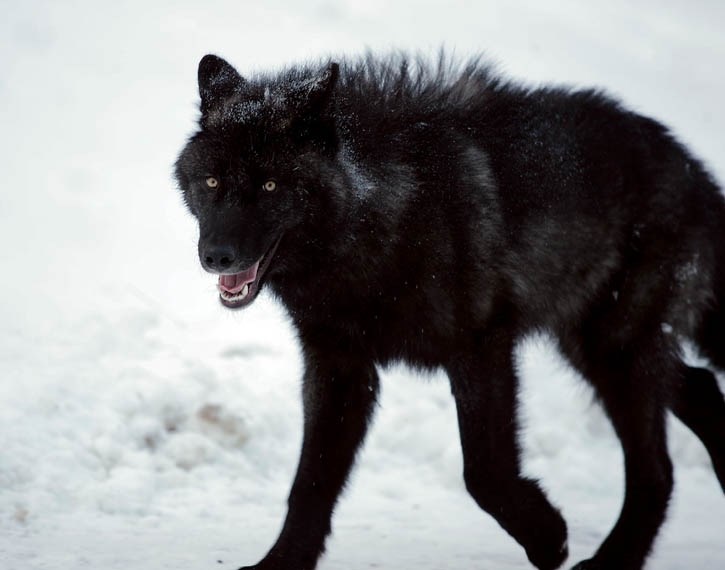 A member of the Bow Valley wolf pack in Banff National Park.

Parks Canada plans to crack down on illegal campers and hire more staff this year in a bid to give wildlife a better chance of survival, particularly in light of wolf deaths in the Bow Valley last year.

Illegal campers, who can attract animals such as bears and wolves with unsecured food and garbage, will be charged as part of a zero-tolerance policy, while the numbers for additional staff in the field are being finalized.

In addition, two of the three remaining wolves from the beleaguered Bow Valley pack have been fitted with tracking collars. The alpha male was re-collared this month and a two-year-old grey female has a collar for the first time.

Bill Hunt, resource conservation manager for Banff National Park, said tracking data would show where wolves are hanging out and travelling, potentially providing information on illegal or messy campsites and whether wolves are in town looking for overflowing garbage bins.

“We want to understand how the wolves are using the landscape, which corridors they are using effectively, and where they might be getting into trouble in terms of human food,” he said.

“The wolves, unfortunately, are much better at detecting food and garbage and illegal camping than we are, so we will use their behaviours to help us key in on those things and respond, unfortunately in a reactive way, but as timely and as quickly as we can.”

Last year was a tough year for wolves in the Bow Valley.

Two female wolves, including the Alpha female and a female yearling, were shot and killed following a series of incidents that led wildlife officials to believe they had become food-conditioned and potentially a public safety risk. Four pups were killed on the train tracks.

On Jan. 14, Parks Canada brought in Bighorn Helicopters to help with capture and collaring efforts. The third member of the pack, a black sub-adult male, was captured but not collared as he quickly chewed through the net. At present, he has a non-functioning collar.

“We’re still hoping to recapture him and assess his health and remove that collar if we can,” said Hunt. “We have to make a decision on whether we re-collar or just remove the old collar and give him a break. His behaviour has been pretty great.”

John Marriott, who has come to know the wolves through his work as a wildlife photographer, supports the collaring project if it means these wolves can be saved and escape the same fate that befell other members of the pack last year.

“In this case, I think it’s the only hope these guys have of staying on the landscape,” he said.

Marriott said he hopes this means Parks Canada can aggressively track the animals and do conditioning and intervention work when needed.

“My hope is they put collars on so they keep close tabs on them and intervene and avoid having to kill them,” he said.

“I think one of the concerns is that are they just putting collars on so it’s easy and convenient to kill them when they get into trouble.”

Hunt said that’s not the case at all, but indicated wildlife crews had limited success with conditioning work last year because wolves move so quickly.

“We will try those efforts when we need to,” he said. “But wolves are so highly mobile compared to something like a bear that it’s almost impossible for our teams to get there in time to apply effective aversive conditioning.”

For the most part, Hunt said, the three remaining wolves have not displayed concerning behaviour this winter, other than coming within about five metres of a Mount Norquay employee as he worked on snowmaking equipment in early December.

He said there have also been reports of the young female wolf getting close to vehicles along Bow Valley Parkway, prompting him to encourage anyone to report any incidents of wolves being fed or coming too close.

That said, Hunt said wolves have been hunting effectively this winter.

“Despite the small pack size, they have been taking down elk and deer in the valley,” he said, noting staff have come across several kill sites.

“They are back onto good, healthy, wild wolf food and we’d like to keep it that way.”

Given the record-breaking number of visitors expected in the park this year with free entry, Marriott said he believes it’s just a matter of time before this wolf pack gets into trouble again, with particular concerns for the young female.

He said the young gray female appears food-conditioned, although the young male wolf is visible, but quite wary. He’ll duck into trees, sometimes quickly runs away or walks by a vehicle as it’s cruising by.

Parks Canada plans to hire additional staff this year. Additional staff will allow for personal conversations with visitors about how to behave around wildlife to keep them wild and the importance of clean campsites.

“We will also have a number of extra wildlife staff,” said Hunt, noting the existing wildlife branch has nine dedicated staff, but can rely on four or five others.

“We’re just confirming the numbers now, but our capacity to get out and respond will be increased.”

A big focus will also be put on detecting illegal campsites, in part by relying on the public to report illegal campers, as well as having law enforcement patrols and warden Mike Henderson using his search dog to locate campsites in the woods.

Last year, many people were charged for messy or illegal campsites, including two campers who were fined $1,000 each after it was determined one of the wolves that was put down was attracted to food at their Two Jack Lake campsite.

“Illegal camping just presents too much of a hazard, both in terms of safety for the occupant, and bears and wolves seeking out food,” said Hunt.

“We’ll just have a zero tolerance policy as we did last year, where if you are found illegally camped, you will be charged.”

Parks Canada plans to be aggressive in the message it sends visitors before and after they arrive in the national parks and also calls on members of the public to immediately report illegal activities, such as feeding wildlife.

“It’s the people we need to be teaching, not the wolves,” he said. “If we can secure food and garbage, if we can prevent the illegal camping, if we can have campers keep sites clean at all times, the wolves will take care of themselves and that’s what we’ve seen this winter.

“We encourage people to enjoy seeing wolves, watching wolves, get a quick photo from the safety of your vehicle and then please consider moving along. Please enjoy them and give them space and give them room to be wolves.”