Snowed in and stranded, hundreds trapped on Trans-Canada

BOW VALLEY – A massive early season snowstorm that blanketed the region caused traffic chaos on highways and roads and led to the evacuation of 300 stranded motorists from the Trans-Canada Highway – some stuck there for up to 15 hours.
Oct 2, 2018 11:44 AM By: Tanya Foubert, Cathy Ellis And Paul Clarke 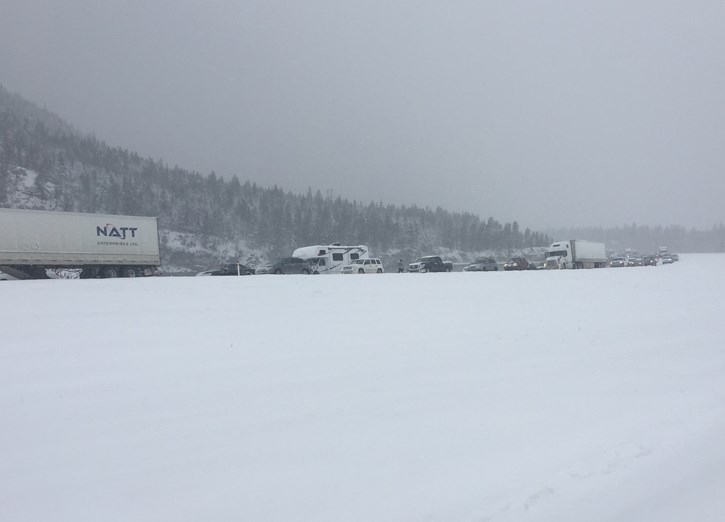 Vehicles heading eastbound on the Trans-Canada Highway pictured around 1 p.m. at a standstill on Tuesday (Oct. 2). Poor winter driving conditions have resulted in delays for travellers and warnings from local RCMP.
BOW VALLEY – A massive early season snowstorm that blanketed the region caused traffic chaos on highways and roads and led to the evacuation of 300 stranded motorists from the Trans-Canada Highway – some stuck there for up to 15 hours. Up to 60 centimetres of snow fell throughout the region over two days, causing treacherous road conditions that led to semi-trailers jackknifing and dozens of accidents. At the height of the chaos, hundreds of vehicles were stuck at the hill by the rock cut between Lac des Arcs and Highway 1X. In response, the Town of Canmore opened a warming centre at Canmore Community High School shortly before 1 a.m. on Wednesday (Oct. 3), housing about 300 people by the middle of the night. The emergency shelter was shut down at 9 a.m. With only 50 cots at the school, the Town of Canmore contacted Banff to bring extra cots to the high school. Banff firefighters responded by delivering 68 cots to the Canmore warming centre. “Coffee, water, snacks, and eventually muffins and juice were provided,” said Robyn Dinnadge, the Town of Canmore’s communications manager. Snow began falling Monday night (Oct. 1) across many regions in southern Alberta, turning into a massive early season snowstorm into Tuesday before finally tapering off Wednesday morning.

With night falling and hundreds of people still stuck on the road, RCMP decided to close the Trans-Canada in both directions from Dead Man’s Flats to just east of Lac des Arcs at the rock cut to begin evacuating stranded motorists.

At 11:30 p.m. Tuesday, the emergency coordination centre was activated at the Canmore Fire Hall to coordinate closure of the Trans-Canada Highway, evacuate stranded motorists, open a warming centre and get information out to the public.

RCMP and fire crews worked throughout the night to get to all of the motorists who were stuck on the highway. Some travellers were stuck for up to 15 hours near Lac des Arcs.

Many vehicles ran out of gas, others had dead batteries. Vehicles running were escorted back to Canmore, while semi-trucks were encouraged to move to the shoulder so that a lane could be cleared by plows and cars could be driven back to Canmore.

Eastbound lanes were blocked by large trucks blocking both lanes, making it impossible for maintenance vehicles to plow a lane. As of 5:30 a.m. Wednesday, there were two plows on Highway 1A and three plows on the Trans-Canada.

“Thanks to everyone who worked to make this happen,” said Dinnadge. “It’s been a long night, but everything ran smoothly with a tremendous effort put in by all.”

RCMP said the people were not prepared for the road conditions with the snowstorm, noting the Trans-Canada Highway and Highway 1A were shut down mid-afternoon Tuesday.

“Rather than congesting areas more with traffic, we shut highways down to maintain what we had there already so we could prevent more collisions and any injuries.”

Canmore Mayor John Borrowman praised the work of emergency responders who worked through the night, noting they went vehicle to vehicle to get people across the median from the closed eastbound lanes.

“They were literally walking along the highway so it was a terribly slow process, a real mess,” he told Mountain FM Wednesday morning.

Borrowman said it must have been difficult for Volker Stevin, the snow removal contractor, to handle the situation and get plows out with all the vehicles blocking the highway.

United Towing Services in Canmore said it received hundreds of calls for help from stranded motorists.

“I’ve worked for the towing industry for 10 years and I’ve not seen a day like this at the beginning of October,” said United Towing’s Allisha Leach.

“I had a driver yesterday (Tuesday) who went out at 1 p.m. and was stuck on the highway to almost 9 p.m. It was crazy out there.”

Leach said one of the biggest problems that compounded the situation was that motorists would not move over so tow trucks could get there.

“We were trying to get out to motorists, but nobody was moving over for the tow trucks,” she said.

Prior to being rescued, many motorists took to social media to vent their frustrations and share stories about being stuck on the highway for hours on end with no help or information.

Kimberley Day was on her way to the Calgary airport with her partner when they got stuck for more than nine-and-a-half hours on the highway between Deadman’s Flats and Lac des Arcs.

“As the darkness fell it started to really sink in that we could very well be here for hours,” said Day.

“We’re fortunate that we have gas and we have water because there are definitely some people around us who are probably a lot more desperate than we are.”

Others shared similar stories from their vehicles.

Natalie Bowker was traveling from Lake Louise to Saskatoon with a friend when they became stuck behind a lineup of cars and transport trucks near Lac des Arcs at about noon.

“No one has come by to check on anyone for food, water, gas, or anything like that.”

Derek McKirdy, a truck driver for the past 15 years, described the situation as a “gong show."

“I’ve driven through worse than this, but what I don’t understand is why there’s no one out here to help people,” said McKirdy, who spent at least eight hours stuck on the Trans-Canada near the rock cut.

“At least I can move around in my truck and I have food and water, but we’ve sat here for eight hours and have not seen a plow or anything, it’s unbelievable.”

He blamed the poor road conditions on the lack of snow plows and sanders.

“I just don’t understand where the plows were, it makes no sense to me why they weren’t out plowing before all this took place.”

Lisa Rosvold, Bighorn councillor for Deadman’s Flats and Lac des Arcs, said dozens of residents and families from both hamlets had to spend the evening in Canmore after the highway became impassable.

“I know that there were a number of people who were stuck on the highway until the early morning trying to get home. Some of them ended up walking from their cars and other people got their kids home safe, but the parents remained in their cars.”

Earlier in the day, Rosvold was among several parents who drove into Canmore to pick up their children after they got a call from the school that buses wouldn’t be able to take their kids home.

“The parents that could come came and picked up their kids and the ones that couldn’t, myself and another parent, took the children to the Canmore Library where we stayed for a couple of hours,” said Rosvold.

After realizing the highway wasn’t going to reopen, she reached out to local hotel owner Frank Kernick, who offered people from her community a place to stay at the Malcolm Hotel for a discounted rate. At least five or six families took up the offer.

With cars still stuck on the highway the following morning, she questioned why the highway wasn’t properly closed earlier in the day to prevent more cars from adding to the congestion.

“As a councillor, I’m certainly concerned the highways weren’t barricaded to prevent people from going and adding to the accumulation of cars on the highway, because it only made things worse,” said Rosvold.

Earlier in the day a Roam regional bus en route from Canmore to Banff left the road near the Visitor Information Centre, leading to long delays for commuters. There were no reports of injuries.

Elsewhere in the region, roads in the mountain national parks were closed, including the Lake Minnewanka Loop and Tunnel Mountain Road in Banff and Moraine Lake Road in Lake Louise. Yoho Valley Road to Takakkaw Falls was also temporarily shut down.

The highway from Banff was closed for a couple of hours eastbound to Canmore in the early morning hours on Wednesday to reduce pressure on Canmore, and traffic was diverted to Banff. The highway there reopened about 4:15 a.m.

“We deployed 10 firefighters involved in the highway closure and cot delivery,” said Jason Darrah, the Town of Banff’s communications and marketing director.

“No reception centre was activated in Banff due to capacity in hotels.”

Environment Canada issued a snowfall warning for Kananaskis, the MD of Bighorn, Canmore and Banff areas.

Preliminary information from Environment Canada determined that by 9 p.m. on Tuesday (Oct. 2) approximately 30 to 40 centimetres fell at Castle Mountain, 25 cms in Banff, 48 cms in Exshaw, and 60 cms at Kananaskis Village.

Dan Kulak, a meteorologist for Environment Canada, said the mountains typically get the biggest snow dumps in October and November, and March and April into May.

“If you look at the long-term record, it’s unusual to get stuff at this magnitude in early fall, but if you are going to get stuff like this, this is the time of the year where they (storms) are becoming more likely,” he said.