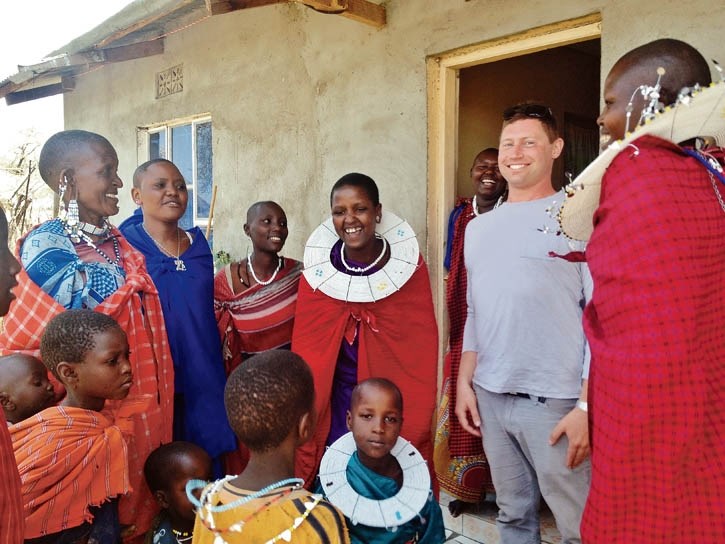 Adrian Cohen seen during his trip to Tanzania with the Rocky Mountain Soap Company.

For one Rocky Mountain Soap Company soapmaker it was the experience of a lifetime when he travelled to a remote area of Tanzania last September to teach locals there how to make soap.

Soap Co. co-owner Karina Birch said the company has provided soap to African missions through CAUSE Canada and other organizations in the past, but when the opportunity arose to send a soapmaker to the continent with Project SHINE (sanitation and hygiene innovation in education) it was an easy decision to make.

“For years we have been sending over soap on different missions with CAUSE Canada or through Trinity Bible Church … but when a friend of ours connected us with a colleague at the University of Calgary, that was the partnership we needed to get something like this off the ground,” Birch said.

It was Soap Co. employee Adrian Cohen who stepped forward to volunteer for the project and join Project SHINE founder Sherri Lee Bastien in Tanzania. Bastien’s project had government grant funding to make it possible to teach villagers in the Ngorongoro Conservation Area how to make their own soap, as there is a need for improved sanitation to prevent the spread of illness there.

“The partnership worked because Sherri was the one who identified the need for hygiene and sanitation,” Birch said. “She knew the area and could identify the key people that needed to be involved in Tanzania, but Adrian provided the whole piece on how we actually get soap made.”

While at Rocky Mountain Soap Company’s headquarters in Canmore they have all the ingredients and a controlled environment, Cohen said the biggest challenge for him was finding out how to make soap from nothing in a completely new environment.

“Essentially, we were going in with a very limited knowledge of what was available and very limited resources in an uncontrolled environment,” he said. “What I wanted to start with is answering the question ‘what do we have?’ And the answer was not much. There is no electricity, no heat sources, no running water, no access to any reliable source of oils or chemicals, very limited transportation and very limited essentially everything.

“What I set out to do is come up with a plan for how could I make soap starting with nothing.”

There are certain things that are absolutely necessary for making soap – the chemical sodium hydroxide and oil. While all cultures cook with oils, Cohen said he began researching what reliable sources of oil could be found in Tanzania. It was important to know the types of oil available, because each has a different amount of sodium hydroxide needed to turn it into soap.

“Essentially, what I wanted to do was arrive there armed with all the information, so regardless of what ingredients or materials we found there, I could come up with an appropriate recipe that would work,” Cohen said. “My plan was to arrive with information and adaptability.”

Upon arrival in Tanzania, he said they found a source of sodium hydroxide and sourced basic tools for soap making to leave the village so they could continue making soap after they learned how. They procured measuring devices, containers and oils before heading to the village of Endulen in the Ngorongoro area.

Cohen taught four workshops in four days and estimated they taught more than 50 people how to make soap. The first workshop was in the local high school for students, while the other three were more informal and involved local hospital staff, village elders and a group of local widows.

“I taught them the chemistry, the why and how, and they were able to grasp all that information through a translator,” he said, adding in that region they speak two languages, Swahili and a traditional Masaai dialect.

“It is important to get buy-in from all of those groups of people. It is no good to just teach the children to understand it if it is unwelcome in their culture by the elders. Luckily, we were able to get the entire community interested and keen in making soap.”

He said there was some apprehension and doubt about whether villagers could actually make soap on their own after being taught. Cohen said what he wanted to show them is that soap making is quite easy and all they need are some basic knowledge and then adapt that to make it on their own.

“In order to give them ownership of the soap, I wanted them to make unique Masaai soap, so I went about collecting local botanicals and things they had available to show them they can change the soap recipe to be whatever they like,” he said.

In addition to the local botanicals, he sourced goat milk and a variety of oils – peanut, sunflower and corn – to incorporate into soap making. He said the villagers were astonished to learn to make soap out of simple ingredients and by the end of the trip they tested some of the soaps made and “sure enough it foamed up, lathered and presto they had soap.”

He said the villagers now have the capacity to make soap as a potential business venture and sell it to local safari lodges or barter for other goods in the area. Of course, creating an income source is in addition to increased sanitation and hygiene that comes from residents of Endulen being able to make their own suds.

“Before Adrian went over there and did this work, I would have thought it would have been a lot more complicated to get soap to work,” Birch said. “I think this also opens the door for more partnerships with other organizations doing work in Africa.”

Meanwhile, Project SHINE’s funding has been used up for this education outreach initiative, but organizers hope to continue with the work into the future. It is a collaborative research project between the U of C’s global health and international partnerships division and the Catholic University of Health and Allied Sciences in Tanzania that aims to build capacity of youth and communities to prevent parasitic infection and improve sanitation and hygiene in the Ngorongoro Conservation Area schools and communities.

Project SHINE has a Facebook page and Bastien can be contacted at sbastien@ucalgary.ca for more information.