"It has been requested by the Stoney Nakoda Nation that the historic designation be rescinded and we are awaiting the province to get back to us."
0
Feb 27, 2020 8:00 AM By: Jenna Dulewich 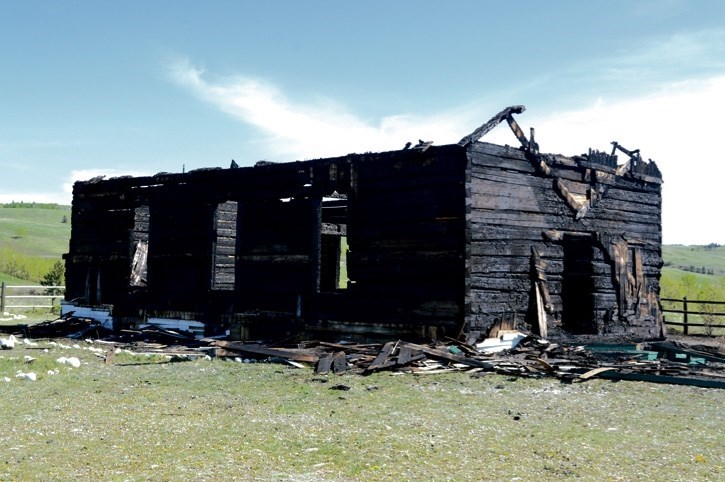 The charred remains of the historic McDougall Memorial United Church on Highway 1A, east of the Morley townsite. RMO FILE PHOTO

At a recent appeal hearing where nation representatives asked the MD of Bighorn to deny the development permit to restore the 142-year-old church that burnt down nearly three years ago, a lawyer from Rae and Company informed the appeal board that the Nation has sent a letter to the province requesting the removal of the historic designation to the McDougall site.

"It has been requested by the Stoney Nakoda Nation that the historic designation be rescinded and we are awaiting the province to get back to us," lawyer Sara Louden told the board and full gallery in the MD of Bighorn council chambers last week.

In the appeal submitted by Stoney Nakoda, Nation representatives said the provincial and municipal historical designations are "subject to review since there is no longer an historic building, the subject of the designation, on the subject property."

Established as the Morleyville Mission in 1873, the church was built on the lands east of the Stoney Nakoda reserve along Highway 1A in 1875. The building was then restored in 1952 after it was left derelict for 50 years.

In 1979, the site was named a provincial historical site, as it was the first Protestant church built in southern Alberta. The MD of Bighorn also designated the Morleyville Methodist Mission as a municipal historical resource in 2013.

While some Nation members attended semi–annual services and events hosted at the site, other Stoney Nakoda residents did not have much to do with the church, given that it was a reminder of the legacy of residential schools.

With the last residential school closed in 1996, intergenerational trauma is something felt among families within the community as the schools were well-documented places of physical and mental abuse to Indigenous children in Canada during the 19th and 20th centuries.

In May 2017, at 4 a.m. a deliberately set fire that is still under investigation by Cochrane RCMP burned down the historic landmark, leaving the Nation to question whether or not the church should be rebuilt.

"Any historic recognition and designation must include reference to the painful legacy that for many Stoney Nakoda members is associated with the church," the appeal letter read.

The lawyer also brought up a 2004 document signed between the McDougall Stoney Mission Society and the Stoney Nakoda Nation, which stated the Stoney Nakoda Nation has the exclusive and irrevocable option to purchase the land if, "the lands no longer are the site of the McDougall Memorial United Church or any replica or replacement thereof, the construction of which has commenced AND the lands no longer carry the designation of 'Provincial Historical Site' and the order stating same is discharged from the title to the lands."

If that option was explored and granted, the Stoney Nakoda Nation could purchase the land for $1.

McDougall Stoney Mission Society president Brenda McQueen argued there is no provincial review process for historical sites, adding the church itself was not the subject of the designation, but rather the entire site itself.

"There are archeological [resources] that remain on the site. [The Nation said] should the designation be rescinded then they can purchase the site – our response, this would be true if the province would rescind designation," McQueen said at the appeal hearing, noting the province had indicated it had no intention of removing the designation.

Included in the society's rebuttal was a letter from the provincial director of Historic Places Stewardship Programs outlining the historical significance of the site. It noted because the designation remains in place, a ministerial approval would be required to rescind all or a portion of the designation from the lands.

"As a designated Provincial Historic Resource, approvals are required for any interventions on the property. This review involves determining if the proposed changes meet the Standards and Guidelines for the Conservation of Historic Places in Canada," the email dated Feb. 4 reads.

Stoney Nakoda elders spoke at the appeal hearing with mixed emotions on whether to rebuild the church or not.

"Nakoda people belong to that land and we did not surrender. I do not support to rebuild the church and I stand with what I believe in," Tracy Crawler, Stoney Nakoda resident said at the hearing.

The MD of Bighorn subdivision and development appeal board has 15 days to make its decision from the Feb. 18 hearing date, but noted it could take longer given it is a "relatively complex issue."

The government of Alberta did not respond to the Outlook in time for deadline.