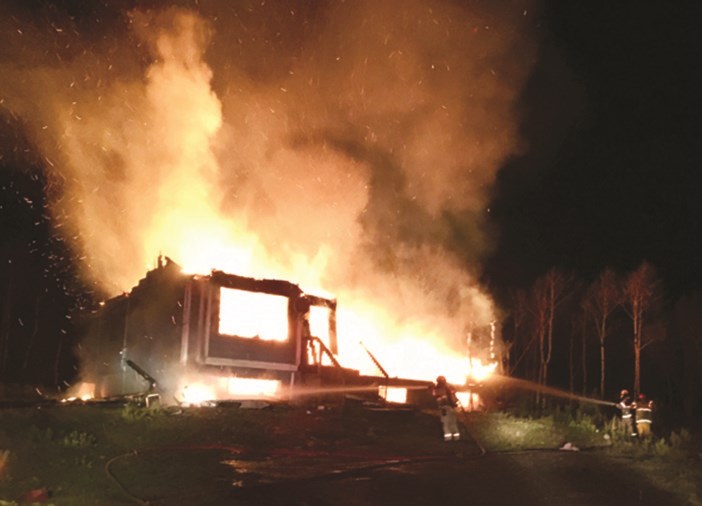 The Stoney Nakoda Fire Department disbanded after it’s fire chief unexpectedly departed last week.
STONEY NAKODA – The Stoney Nakoda Fire Department is no longer responding to emergency calls on the First Nation reserve after its fire chief unexpectedly resigned last week, leaving 3,700 residents vulnerable to emergencies. Jeff Beddome, the fire chief for the department, announced his resignation in an email and told area fire chiefs the Stoney Nakoda Fire Department was disbanding. The Outlook was unable to reach Beddome and has not seen the email, however, Rick Lyster, the fire chief for the Exshaw Fire Department, confirmed the Stoney Nakoda Fire Department is no longer operating. “They’ve disbanded,” said Lyster. “His email said they’re done, there’s no manpower.” Prior to Beddome’s resignation, the chronically underfunded fire department had only three firefighters and operated Monday to Friday between 9 a.m. to 5 p.m. As a result, it relied heavily on the Exshaw Fire Department as well as the Cochrane Fire Department to respond to emergencies. Last year the Exshaw Fire Department responded to at least 60 calls on the reserve. Twelve of those responses were for a possible structure fire, four of which were confirmed house fires leading to total losses, while another five were extinguished. Lyster said the fire chief’s sudden resignation came as a surprise, but he doesn’t expect to see a huge increase in the number of calls his department responds to. “I really don’t expect a big increase in calls, but I might be surprised,” said Lyster. Regardless, he said he’s concerned about the lack of adequate fire coverage across the 445 square kilometre reserve, which includes more than 700 houses and 75 other buildings, including two schools and a healthcare centre. “It’s not a good situation,” said Lyster. “We’d like them to be completely self-sufficient and that may never be, but they still need to have something.” In a telephone conversation with Beddome, Lyster said the former fire chief expressed concern about "financial issues" at the fire department. "He didn't go into the details, but just said there were some financial issues," said Lyster.  "He just said one day from the next there's no money."

According to information provided by Indigenous Services Canada, the Stoney Nakoda Fire Department received an average of $89,000 annually between 2010 and 2018. In comparison, the Municipal District of Bighorn spent $301,000 on fire protection in 2017 alone.

According to Lyster, Beddome indicated in his email that he intends to continue working as a casual emergency services technician with Nakoda EMS. He also told Lyster that he recently accepted a firefighting position with the Calgary Airport Authority, which ended its relationship with the Calgary Fire Department.