STONEY NAKODA – For the second time this year Stoney Nakoda residents have rejected a referendum which would have seen nearly 3,000 hectares of land re-zoned for commercial development.
Oct 19, 2018 10:45 AM By: Paul Clarke 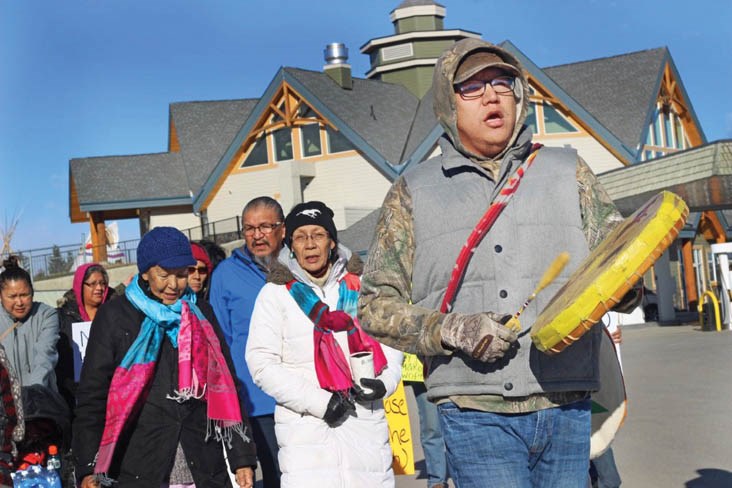 Dozens of protesters from Stoney Nakoda First Nation held a march last week (Oct. 12) against a land referendum being held on Oct. 18.

STONEY NAKODA – For the second time this year Stoney Nakoda residents have rejected a referendum which would have seen nearly 3,000 hectares of land re-zoned for commercial development.

The result is a serious blow to the Stoney Tribal Council, which previously vowed to continue to hold referendums until it passes.

Voter turn out was slightly lower this time around, however, a larger percentage of voters rejected the ballot question on Oct. 18.

A total of 1,205 of 3,233 eligible voters from the Stoney Nation – Morley, Eden Valley and Big Horn — cast ballots. Nineteen ballots were rejected.

“I am very pleased that our people stood up for our land,” said Rachel Snow, who helped organize a protest last week against the referendum.

“From the first vote in February chief and council had seven months to do the community meetings, appraise the people about the necessity of the land designation, but they didn’t do that.”

She criticized the tribal council for failing to properly consult residents and only giving them six weeks notice before the referendum was held, the minimum amount of time required by Indigenous and Northern Affairs Canada.

“There could have been community consultations from February until September letting people know what is happening and what’s the rationale behind this," said Snow.

“I think what the chief and council should take from this is the people are going to keep voting no until they are included, until there’s consultation. Consultation isn’t just for the federal government with bands. Consultation or communicating with the people starts at the local level.”

According to a press release from the tribal council, there were a total of five community information sessions for Stoney Nakoda members to ask questions and learn about the land designation ahead of the vote.

"Our goal with this referendum was to give people information and chances to come out and ask questions. We feel the community did that and we had good discussions. We respect the outcome of the vote," wrote Jordie Mark, a Chiniki councillor and spokesperson for Stoney Nakoda Nations.
"Chief and Council still have the job of moving forward to find a path to economic success. We will now start a process of discussions with our community to determine what that path may be."
According to the press release, for several decades Stoney Nakoda First Nation has relied on revenue from oil and gas resources, however with the drop in oil prices the lost revenue has created hardships for the reserve.
"A positive land designation vote would have helped the Nations move towards diversification of revenue, especially with exciting business ideas like renewable energy, tourism, and possible partnerships that may be possible with a pending Calgary 2026 Olympic bid," the press release stated. "The Nations' leadership understands the need to preserve traditions and keep the land in good condition for future generations. Any economic development would have been done with membership input and thoughtful decisions."
The rejection of the referendum came a week after dozens of protesters marched from the Chiniki Gas Bar to the Stoney Nakoda First Nation Administration building in Morley against the referendum.
The modest-sized group held signs that said “Vote No” and “Take care of Mother Earth,” amid concerns the plan might not result in the economic development and jobs that had been promised.

Prior to both referendums, elected officials promised voters that if the referendum passed it would lead to more business opportunities, jobs and prosperity for the Nation.

Snow said many of those who opposed the referendum did so because they want to know the status of the Stoney Nakoda Resort and Casino, which is owned by the First Nation and was part of a land designation referendum in 2002.

“We’ve consistently asked for the financials and for the breakdown on how that business is doing,” said Snow.

“Why would we go designate more land when we don’t have an update on the one business we have designated? We don’t know how it's doing so how can we therefore as community members endorse seven more plots being put up for business development.”

An interview request to Indigenous Service Canada was not immediately returned.