Two back-to-back storms put the mountain national parks on flood watch for several days last week as rivers rapidly swelled – but the worst appears to be over for now.
Jun 14, 2012 12:00 AM By: Rocky Mountain Outlook 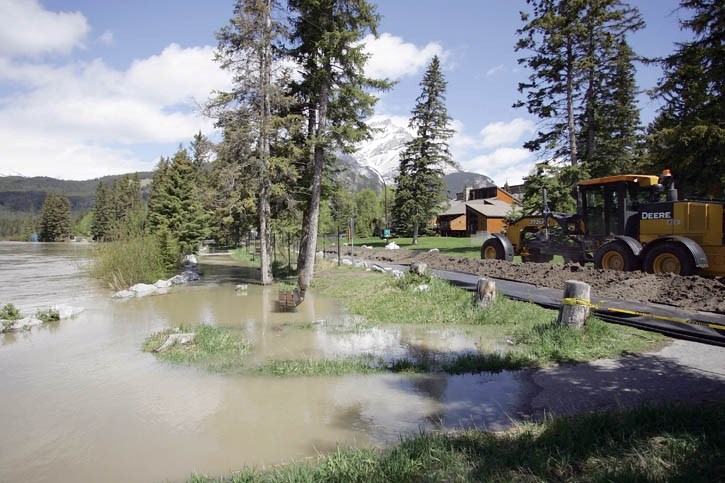 A grader pushes dirt into place along Bow Avenue as the Town of Banff builds levies to protect against the rapidly rising Bow River Thursday (June 7). The river rose around two metres in two days.

Two back-to-back storms put the mountain national parks on flood watch for several days last week as rivers rapidly swelled – but the worst appears to be over for now.

With record snowfall in the mountains still to come down, and last week’s heavy rainfall to blame for the high water levels, the Bow Valley remains on alert.

The swollen Bow River burst its banks in the Banff townsite Thursday (June 7), spilling over onto the Bow Avenue pathway and flooding the rec grounds, picnic areas and horse stables on the south side of the river.

Banff was put on flood watch Wednesday (June 6) and within days was downgraded to a high stream advisory as water levels declined, though officials say warmer weather and more rain could threaten the area again.

“The river peaked on Thursday and there was some localized flooding, but the worst is over for now,” said Diana Waltmann, the Town of Banff’s communications manager.

On June 6, the outfall gauge at the end of Wolf Street showed a rise in water level of approximately one metre.

The river spilled over the banks Thursday evening around 6 p.m., reaching a level of 3.59 metres and a flow rate of 319.03 m3/s. By comparison, two days before, the level and flow rate was 2.5 metres and 75 m3/s respectively.

“It was historic in its rate of rise,” said Paul Godfrey, the Town of Banff’s operations manager.

“We’ve been told by Alberta Environment that all of this is directly related to convective precipitation and that none of this is related to the historic snowmelt. It is still lying in wait.”

The Town was quick to build a berm along Bow Avenue from the canoe docks to Central Park to protect private property and on Birch Avenue in front of the Luxton museum last Thursday.

The pathways, stairs and promenade in the Bow Falls area were all closed off with tape, barricades and snow fences, and Bow Avenue, Glen Avenue trails and the rec grounds were also closed.

All of the Town’s infrastructure – manholes, lift stations, vaults, culverts – were sealed off to prevent overflow to the wastewater treatment plant. About 1,000 new sandbags were made to add to the municipality’s inventory.

Town crews reopened some closed areas earlier this week, as river levels continued to drop. Check the Town of Banff’s website at www.banff.ca to see which areas are open closed.

Meanwhile, Parks Canada closed a number of trails in the Banff, Yoho and Kootenay national parks, along with the Lake Louise campground.

Millen said water levels have receded back to normal spring highs, saying Parks Canada is not expecting any imminent flooding.

“However, we did have one of the highest snow packs in the mountains and during last week’s rainfall down here it was snow that was falling up there,” she said.

“That snowmelt has yet to come down and we’re going to be monitoring the situation. The only situation where we would have another spike is if we got warm temperatures and rain at elevation.”

The northern end of Kootenay National Park was one of the hardest hit areas, with high water levels forcing the closure of the Stanley Glacier, Dog Lake, Paint Pots to Marble Canyon and other extended Paint Pots trails in the area.

Millen said the trails there will remain closed until further notice.

“The footbridges have sustained some damage and so right now we’re dealing with public safety issues,” she said.

“Once the waters have receded we’ll have a better chance to get out there and assess things.”

To find out the most up to date information on what’s open or closed in the mountain national parks, go to Parks Canada’s website at www.parkscanada.ca