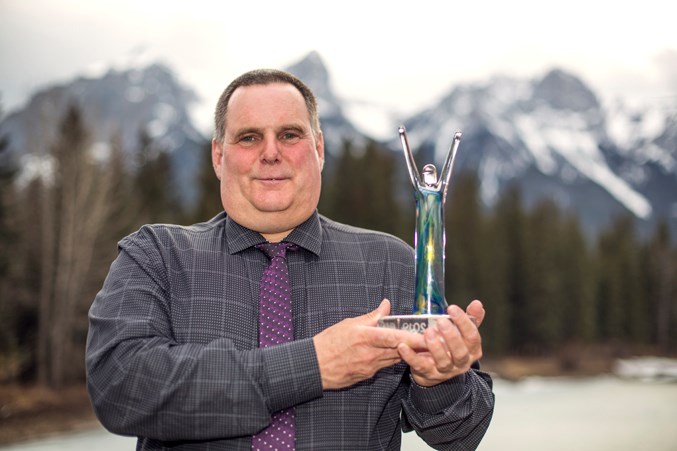 Dave Ouellette holds up his statue from the Mayors Volunteer Awards at the Canmore Golf and Curling Club on Wednesday (April 3).

Smiling from ear-to-ear as he accepted the Great Neighbour Award at the 30th annual Mayor’s Awards for Volunteer Excellence last Wednesday (April 3), Ouellette said he was “blown away” by the nomination and win.

“I was almost in tears,” Ouellette said with a humble laugh.

“It means a lot to me to be part of the community because I come from a small town.”

Hailing from Spruce Grove, 11 km west of Edmonton, where his grandfather was a councillor and his father was a businessman, Ouellette said he is trying to pass down his sense of community spirit to the next generation.

“I am just trying to teach my girls the value of being part of a community. That’s why they are here,” Ouellette said with his three daughters in tow.

It turned out to be a great teaching lesson as Ouellette was acknowledged for going out of his way to keep community members “well and safe.”

“The spirit demonstrated by Dave is certainly a spark to light the fire of community volunteering and his actions serve as a catalyst to promote other acts of kindness within our community,” his nomination read.

Notable examples included his helpfulness of offering free-of-charge rides during the major snowstorms last October and this February, giving free rides when the Roam transit buses have been stranded, offering free rides for stranded travellers when the highway shuts down, offering to drive children to school for free when school buses were not running, and picking up lost items in his taxis and using social media to make sure the treasured items were returned to their rightful owners. Ouellette even received a nod for his “great Christmas display at his house over the holidays for families to enjoy.”

Hosted for the past three decades as a way to promote and foster the volunteer spirit in the Bow Valley, Canmore Mayor John Borrowman said this is the “greatest way we can show how important community is to us all.”

“I hope the generosity shown by Dave – in showing that is does not necessarily take huge efforts to make a big difference in the community – is echoed by other local business owners.”

The family-owned Three Sisters Taxi is also a behind-the-scenes player, the ‘Great Neighbour’ explained at the ceremony.

“We actually sponsor a lot of these [groups], the Canmore Eagles, the Highland Games, the Bow Valley SPCA – there is a lot of stuff that they don’t know what we do,” Ouellette said.

“Time is my enemy. I don’t always have the time, but if I see something where I can give my resources, the taxi company, or myself, or even if it’s a financial thing, I’m willing to do that.

“I think if people have the opportunity, just anything they can do that they might not think is important, can be important to someone else.”