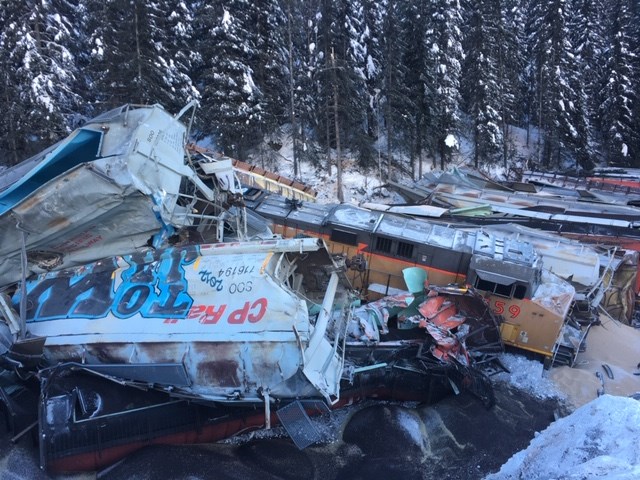 The Transportation Safety Board (TSB) is investigating a train derailment near Field B.C. on Monday (Feb. 4) that killed three CP Rail workers on board.

The westbound freight train derailed at about 1 a.m. on Feb. 4 sending upwards of 60 train cars off the tracks including one that landed in the Kicking Horse River.

CP officials said the derailment happened west of Field near the Spiral Tunnels and have begun a full investigation to determine the cause of the accident.

"It is with great sadness that CP reports that three crew members on board were fatally injured in the incident," said Salem Woodrow, media spokesperson for CP.

"Our condolences and prayers go out to their families, friends and colleagues."

The Transportation Safety Board said it sent four investigators to the site. The accident was reported to them at 2:10 a.m.

STARS air ambulance was called, but stood down due to weather and safety concerns. They would not have been able to safety land.

On-scene personnel were not offering comment Monday afternoon, as CP Rail, emergency personnel and several semis towing excavators were brought in to assess and clear the wreck.

Eric Collard, TBS spokesperson, said the only access to the site is by a high-rail, essentially trucks modified for train tracks.

He said investigators will look for the locomotive event recorder, similar to a black box.

"We'll gather as much information as we can ... on throttle position, speed, direction, distance," Collard said.

"We'll collect data, conduct interviews with personnel and first responders and others and examine and photograph the wreckage."

It is believed the cars were carrying canola oil and grain.

"The extend of the environmental impact of the derailment is currently unknown. Based on initial assessment, there is no threat to public safety," Lesley Matheson, Parks Canada partnering and engagement officer stated in an email.

"Parks Canada is committed to the protection of the environment in national parks and is working closely with CP Rail to determine the extent of the clean-up operation required."

This is the second CP train derailment near Field, B.C. this year.

The first occurred Jan. 3 when a train came off the tracks inside one of the Spiral Tunnels.

No one was injured in that derailment but 16 empty freight cards left the track.