A two-year-old collared wolf from the Bow Valley pack went on an impressive walkabout to an area near Trout Lake in B.C. where he was shot and killed by a hunter about two weeks ago.
0
Apr 13, 2017 12:00 AM By: Rocky Mountain Outlook 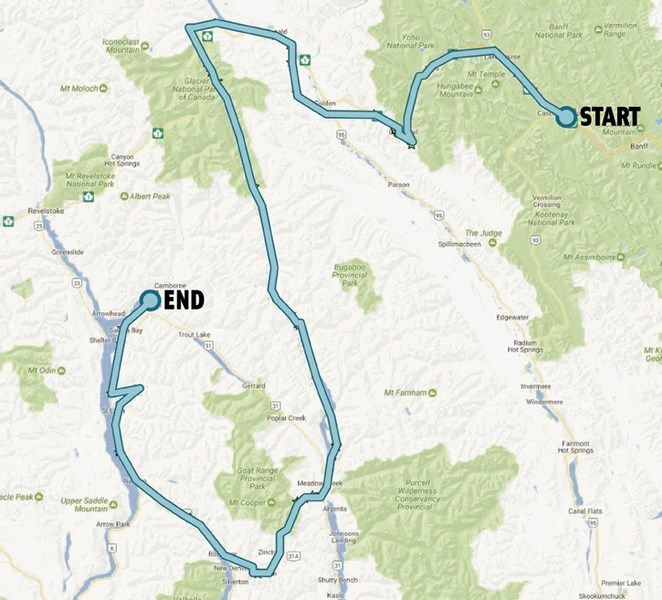 The path that Wolf 1502 took from Castle Mountain till its death in B.C. after being shot by a hunter in March of this year. Data provided by Parks Canada.

A two-year-old collared wolf from the Bow Valley pack went on an impressive walkabout to an area near Trout Lake in B.C. where he was shot and killed by a hunter about two weeks ago.

Known as 1502, the black wolf was fitted with a new GPS collar on March 15 near Castle Junction in Banff National Park and data from the collar showed he started to disperse in the following days.

He travelled approximately 500 linear kilometres between March 15 and March 31 before he was shot and killed by a hunter near Arrow Lakes, north west of Trout Lake and north east of Galena Bay.

“It’s certainly disappointing he wasn’t able to survive once he was out of the protected areas, but it’s certainly not something that’s surprising,” said Steve Michel, human-wildlife conflict specialist with Banff National Park.

“Once looking at the GPS data, and following where he was going, I was frankly surprised he got as far as he did. I was expecting, unless he was able to establish himself in another protected area, he wouldn’t have a long period of survival.”

“Shortly after that we received confirmation from a conservation officer from Nakusp that the GPS had been turned in by a local hunter at a compulsory inspection location,” said Michel.

Dispersal in a wolf pack is a defining trait and critical to pack dynamics, allowing for diversity in packs and formation of new packs.

A wolf may travel great distances looking for a new pack to join, or perhaps a lone wolf of the opposite sex to breed with and establish a new pack.

After wolf 1502 was fitted with a GPS collar mid-March, he stayed in the Bow Valley in the following days, but started heading west towards Lake Louise, through Yoho National Park and onto Golden.

“There certainly have been dispersals in the past that are extraordinarily impressive distances, and this is certainly not out of the ordinary,” said Michel.

“Wolves are wide-ranging carnivores as they need to establish new territory and they’ll travel vast distances to do that.”

John Marriott, a prominent local wildlife photographer who is familiar with the Bow Valley wolf pack, was disappointed by the news, but not surprised because he didn’t think the wolf would last long on provincial lands where he could be legally killed.

“With his familiarity with roads, and although he has some level of caution around people, it would have been pretty easy for a hunter to shoot him,” he said.

“We’re at denning time and a hunter is allowed to shoot a wolf in B.C., which to me is astonishing.”

“Not only do wolves die here, but any wolves that disperse out of the parks tend to have a rough time surviving out there,” he said. “That’s because Alberta and and B.C have such horrible wolf killing practices.”

Last year was a tough year for the Bow Valley pack. Four pups were killed on the train tracks and wildlife staff were forced to destroy the Alpha female and a female yearling over concerns ongoing bold behaviour could pose a public safety risk.

With wolf 1502 now dead, there are just two remaining members of the pack, the Alpha male and his two-year-old daughter.

An annual area closure is now in place along Bow Valley Parkway, where the pack traditionally dens, to protect the animals in the event the male has bred with his daughter. There have been documented cases when this has happened, including in Banff.

“There is that possibility that those two could breed and produce pups. It wouldn’t be typical, but it wouldn’t be entirely unheard of,” said Michel.

“They’ve both got collars and we’ll be be actively monitoring them over the weeks and months ahead.”

Parks remains fairly optimistic about the future of the two remaining wolves based on their behaviour over winter, said Michel, who noted the two have been using wildlife corridors and hunting close to the Banff townsite on a regular basis.

“They have not been getting into the townsite and areas that are of greater concern to us in recent months,” he said.

“They’ve been hunting natural prey and haven’t been seeking out unnatural foods to our knowledge.”

Marriott, too, is hopeful the two remaining wolves can survive.

“Basically they need everything to go absolutely perfectly. They can’t be hit by trains or vehicles or any incidents with people that go wrong,” he said, noting they have to deal with an onslaught of tourists expected due to free park passes.

“The odds are strongly stacked against them, but there’s still a chance.”