As the smoke settles on Verdant Creek wildlife, officials with Parks Canada have already started looking to the future and how destruction from the blaze could be used to regenerate an endangered species of pine tree.
Aug 31, 2017 12:00 AM By: Rocky Mountain Outlook 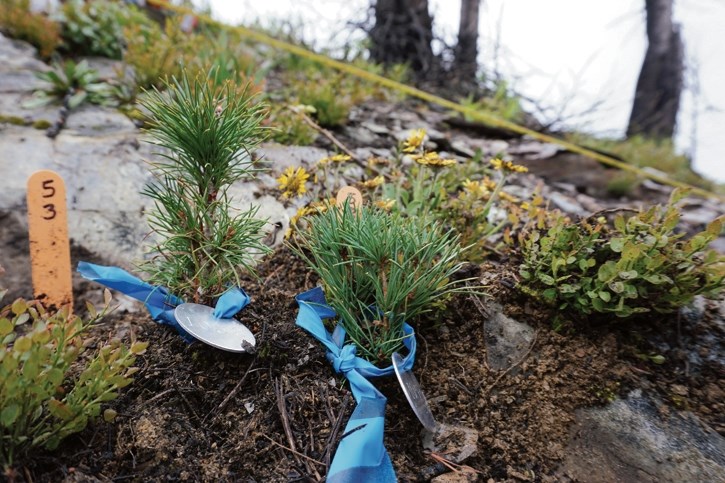 Whitebark pine seedlings being grown by Parks Canada at a nursery near Cranbrook, B.C. as part of the agencys restoration plan for the endangered species.

As the smoke settles on Verdant Creek wildlife, officials with Parks Canada have already started looking to the future and how destruction from the blaze could be used to regenerate an endangered species of pine tree.

Pinus albicaulis – or whitebark pine – is considered an endangered species under the Species at Risk Act and its native habitat includes the Rocky Mountains of Kootenay National Park.

Parks Canada fire and vegetation specialist Jed Cochrane said the Verdant Creek wildfire, which has burned 15,500 hectares across Kootenay and Assiniboine Provincial Park, has burned down whitebark pine trees on the landscape.

The good news, Cochrane said, is that whitebark pine is a fire dependent species and the wildfire would also result in improved habitat into the future.

He said pine trees love sun, so when large areas go long periods of time without wildfire, it results in less habitat for the species.

“Without fire, what we have seen is that spruce and fir species outcompete whitebark pine and there is a loss of overall regeneration and habitat for whitebark pine.”

A lack of habitat is not the only threat facing whitebark pine as an endangered species. The five-needled, high elevation tree species has also been affected by ,blister rust – an invasive fungus that has put even more pressure on the species, along with climate change and mountain pine beetles.

Parks Canada’s species at risk strategy for Kootenay National Park sets out identifying and propagating blister rust-resistant trees as a key strategy to maintain the persistence of whitebark pine on the landscape.

That’s one of the things Cochrane has been focused on through his work as a vegetation ecologist. A blister rust-resistant whitebark pine program has been underway this year, with 2,500 seedlings currently being grown in a nursery outside Cranbrook, B.C.

“I have already been looking at some of the places where there was whitebark pine burned in the fire, so unfortunately we lost some, but I am really optimistic we will see some natural regeneration,” he said. “We are going to get into this fire area in September and plant 1,500 of these seedlings … into spots they will love, free of competition.”

Whitebark pine is only one species that would benefit from the ecological effects of a wildfire in the Rocky Mountains. Cochrane said the fire moved over places that had previously burned in 1994, 2001, 2003 and 2012 and, as a result, it will create a heterogeneous mosaic on the landscape.

“This fire is going to have some really interesting and positive things happen in the Vermillion and Simpson valleys,” he said. “We know the Rocky Mountains are a fire-dependent ecosystem. Fire plays a huge role; it shapes the habitat and the availability of food. This fire will be no exception to that; it has done some neat things as it burned through older fire areas.

“That is creating the heterogeneity we really like to see in these places. Some of the places that were closed forests previously will not turn into grassy ecosystems.”

Randy Moody, biologist and president of the Whitebark Pine Ecosystem Foundation of Canada, said while it is good news that Parks is undertaking efforts to plant seedlings in areas the fire went through, there is also the fact that the fire likely destroyed mature whitebark pine trees as well.

“Fire is really a Catch-22 in terms of whitebark pine management,” he said. “On the one hand, it creates good sustainable habitat for the seedlings, but on the other hand, how many mature whitebark pine trees were burned out in the fire?

“It is great that you have a reset of the ecosystems it has burned and can be planted, but are the benefits outweighed if you look at the mature trees killed in the process?”

It takes upwards of 40 years for a whitebark pine tree to reach the point of being able to make cones, and then those cones are often distributed on the landscape by birds. Unlike other species of pine, whitebark does not need fire for cones to open and begin to grow on the landscape.

Moody said the key to Parks’ strategy when it comes to recovering the endangered species is to maintain mature whitebark pine on the landscape.

While planting the seedlings will help with restoration, Moody pointed to the fact that whitebark pine trees continue to be mistakenly removed from the landscape by logging companies and resource extraction operations in B.C. in addition to the effects of climate change, blister rust and pine beetles.

In addition to Parks, the government of B.C. and one First Nation so far in the province have also committed to planting seedling this year – another 2,500 seedlings.

The foundation is hosting its annual science and management conference on whitebark pine in Jasper in October.