The wandering ways of wolves and the large distances they travel to find mates or new territories continues to highlight the need for connected habitats for wide-ranging carnivores.
0
May 4, 2017 12:00 AM By: Rocky Mountain Outlook 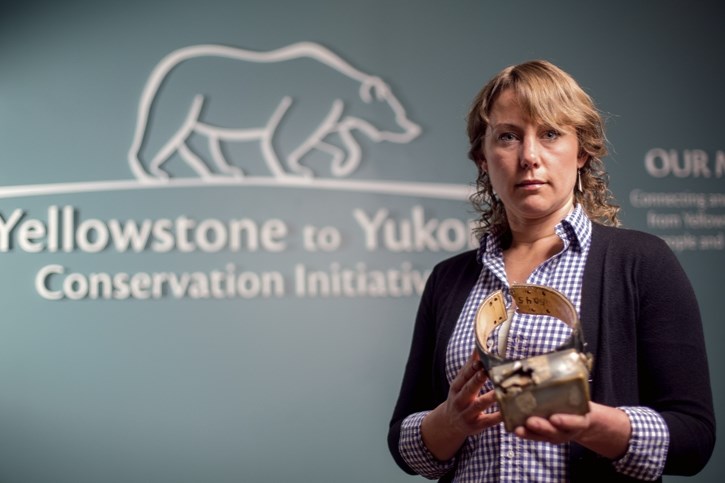 Dr. Aerin Jacob holds the bullet-ridden GPS collar of Pluie, a wolf, at the Y2Y Initiative offices in Canmore on April 21. Pluie was a wolf that went on a 1,200 kilometre journey before being killed by a hunter in 1995.

The wandering ways of wolves and the large distances they travel to find mates or new territories continues to highlight the need for connected habitats for wide-ranging carnivores.

Known as 1502, a two-year-old male wolf from the troubled Bow Valley pack recently travelled more than 500 linear kilometres in about 15 days before he was shot and killed by a hunter in the Arrow Lakes area of B.C.

Wolves and other far roaming animals like grizzly bears continue to show that the Yellowstone to Yukon (Y2Y) region is the scale needed to support animals’ need to roam – and 1502 was the latest local wolf to highlight that.

“To me, it reinforced that we need to be thinking large scale. It really hits home about the importance of connecting and protecting landscapes,” said Aerin Jacob, a Canmore-based conservation scientist with Yellowstone to Yukon (Y2Y) Conservation Initiative.

“It shows us again that nature thinks big. Animals like this move over large areas, and what we think of as big isn’t what they think of as big, and we need to let them show us how they need to move.”

The dispersal of individual wolves allows for diversity in packs and creation of new ones. Lone wolves travel great distances looking for a new pack to join, or perhaps a lone wolf to mate with and establish a new pack.

When there’s a shortage of prey in a pack’s territory, a wolf may decide to leave the pack and travel to other territories in search of food. A subordinate wolf may also choose to leave in search of another pack in which it would have better breeding status.

Perhaps the most famous local wolf to travel such long distances was Pluie, a five-year-old female wolf fitted with a radio collar and satellite transmitter in Kananaskis Country’s Peter Lougheed Provincial Park in 1991.

Researchers tracked her signal as she travelled in 100,000 square kilometres over a two-year period. That’s an area 15 times larger than Banff National Park and 10 times bigger than Yellowstone National Park.

She moved through Banff National Park into B.C., across the U.S. border and through Glacier National Park to Montana, through Idaho and then into Washington State before heading north again to B.C.

In 1993, Pluie’s collar stopped working and her whereabouts was unknown. Two years later, though, a hunter legally shot her and her mate, along with their three pups, near Invermere, B.C. Her collar was handed back to researchers.

In another epic journey, a young male wolf known as 1505 left the Fairholme pack last year and travelled almost 500 km to an area about 50 km north of Nordegg before, surprisingly, heading straight back to join his pack in Banff.

Over the two week period in March 2016, he travelled an average of 37 km a day, spending most of his time outside the protected boundaries of Banff National Park, running the risk of being trapped and killed.

Jesse Whittington, a wildlife biologist with Banff National Park, said it’s not uncommon for wolves to disperse more than 300 km from their home range, but was somewhat surprised wolf 1505 went that far, only to turn around and head straight back.

“I thought he was just going to keep on going, but he flipped and turned around and came right back,” said Whittington, noting he made it back to Banff to join his pack safe and sound.

“I don’t know why he came back, but I am wondering if he was hungry and he didn’t find much to eat and just decided to come back to the Fairholme where there is a lot of prey.”

The fate of wolf 1505 is, however, unknown at this time. His functioning collar became stationary a couple of months ago, high up on a mountain ridge along Lake Minnewanka in the park.

“We don’t know if the wolf dropped its collar or if it died,” said Whittington, adding Parks Canada plans to investigate what may have happened to the wolf once the snow melts.

More recently, when wolf 1502 from the Bow Valley pack started heading west from Castle Mountain where he was collared in mid-March, researchers were keen to see what he was up to as they tracked his GPS collar west to Golden.

From the northeast corner of Glacier National Park, the young black coloured wolf then travelled north to south through the national park before hitting provincial lands and trekking on through the Kootenays, a total of about 500 linear kms.

Researchers had begun to celebrate 1502’s trip as another great dispersal, but that came to an abrupt end when the wolf was shot and killed by a hunter near Arrow Lakes, northwest of Trout Lake and north east of Galena Bay, two weeks after he left Banff.

“Until the ending, it was both an exciting story and one that made us feel a little bit nervous,” said Jacob. “We know once animals get outside big protected areas, it’s a little bit more dangerous.”

A recently-released paper in the United States analyzed the dispersal of hundreds of radio-collared wolves over 15 years in the U.S. northern Rocky Mountains, providing long-term data over a large area.

The study, led by U.S. Fish and Wildlife’s Michael D. Jimenez, covered about 373,000 square kilometres within seven U.S. states, and B.C. and Alberta, showed 10 per cent of the wolf population dispersed each year.

In that study, slightly more males than females left their packs and dispersing males were less likely to mate than dispersing females. The average age of dispersal is 32 months.

Research showed the wolf population in the study area had a 26 per cent annual mortality rate overall, but dispersers had much higher mortality rates than resident wolves.

The study found humans caused more than 80 per cent of wolf deaths – a primary factor determining wolf distribution and density throughout most of the study region.

Y2Y’s Jacob said large-scale wolf dispersals continue to demonstrate that nature doesn’t have the same kind of political and infrastructure boundaries that people talk about.

“If we get information from animals through research and it shows there are patterns on how animals use the landscape, we have to use that information on how the best connectivity is planned,” she added.

“We can’t try to shoehorn animals into something we’ve conveniently planned, that’s only convenient for people. We have to let animals tell us where animals naturally want to go.”