Wolves collared for research on movements

Five wolves in three separate packs in Banff National Park have been fitted with GPS collars to help researchers find out what they’re up to.
Dec 16, 2015 12:00 AM By: Rocky Mountain Outlook 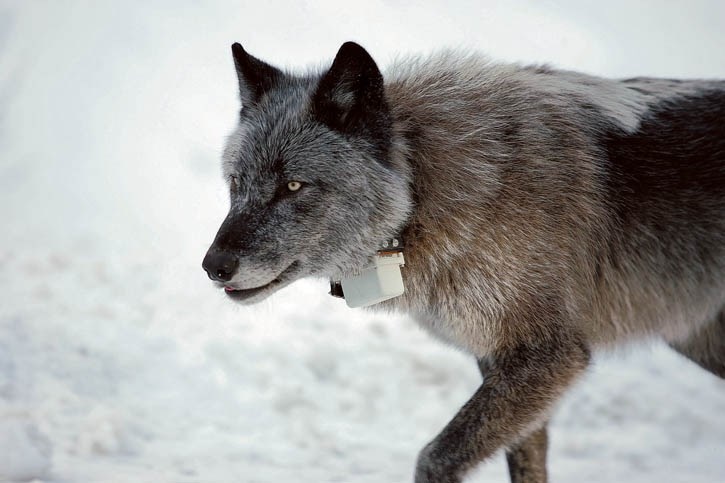 A wolf with a radio collar around its neck.

Five wolves in three separate packs in Banff National Park have been fitted with GPS collars to help researchers find out what they’re up to.

Specifically, researchers wants to know more about wolf predation on mountain goats and caribou, how wolves are using wildlife corridors in the Bow Valley and how effective the mandatory seasonal nighttime closure of the Bow Valley Parkway has been for the animals.

Parks Canada officials say a male and female wolf from each of the Red Deer and Fairholme packs were captured and fitted with GPS collars, and a male from what is said to be a new Bow Valley pack also got a collar.

They were unsuccessful in capturing a second wolf from the Bow Valley pack.

“Our objective was to try and get two collars on each of the packs, and that’s because wolves have such high dispersal rates,” said Saundi Norris, a resource conservation manager for Banff National Park.

“Having two collars gives us an assurance that we’ll be able to get the data we need to answer our research questions. We ended up getting collars on five wolves, spread amongst the three packs.”

Parks Canada hired a professional crew to capture, handle and collar the wolves. The wolf capture project, which uses helicopter net gunning, was undertaken at the end of November and early December.

Animals are located by following tracks in the snow, and then once a pack is spotted, the capture crew targets the appropriate age and size individuals suitable for collaring.

Once they get a net on the wolf, the helicopter lands and the crews collar the animal without the use of immobilization drugs.

“It’s the most effective and least invasive way to capture wolves. They are released within a very short time span, no longer than 15 minutes,” said Norris.

“It’s very short-term stress. We’ve been doing it in Banff and Jasper for the last 10 years and there haven’t been any serious injuries.”

The Bow Valley pack is believed to have five members, the Red Deer pack also has five members and the Fairholme pack has seven wolves.

The two wolves from the Red Deer pack were caught between the Red Deer River Valley and Panther River Valley, and information from this pack is considered critical to Parks Canada’s plans to reintroduce caribou to Banff National Park.

Banff’s remnant caribou herd of five animals was wiped out in an avalanche in 2009 and three of four herds in Jasper have dropped to critically low numbers, with two of the herds – the Maligne and Brazeau – having less than 10 animals.

“While initial caribou recovery efforts will likely focus on regions where caribou still persist, long-term wolf data will help us make better informed decisions when we need to assess the viability of reintroducing caribou in Banff National Park,” she said.

Wolves are opportunistic hunters and generally prey on ungulates like elk, deer and moose. They often target weak, sick or older animals in a herd and have to survive for long periods, sometimes going 12 or more days without food.

Much to the surprise of researchers, GPS data from the Bow Valley Pack in 2009 and 2010 showed that wolves frequently preyed on mountain goats in several locations throughout a 2,000 square kilometer home range.

At that time, few instances of predation by wolves on mountain goats had been documented in the park, but Norris said they did notice a decline in the elk population in the northern end of the park.

“We do not know if wolves have always preyed on mountain goats or if it is a recent phenomenon of wolves switching prey species given declines in other prey sources in the area, such as elk,” she said.

“We were surprised by the findings in 2009 and 2010 and want to know if wolves consistently prey on mountain goats during summer and what effect that might have on the mountain goat population.”

To get this information, researchers will be able to investigate when collar data shows clusters of GPS locations.

“We can then have a crew go in and look and see what they are feeding on,” said Norris.

“The GPS collars are programmed to collect locations every two hours and when we see those clusters, that’s when we can assume they are on a kill site.”

Norris said Parks Canada is working on a large-scale analysis of factors affecting wildlife use of corridors.

“We will analyze this data to determine why wildlife use some corridors, such as the Cascade Corridor a lot, but use other corridors very little,” she said.

Norris said researchers also lack GPS data for the Fairholme wolf pack, and this latest collaring project will help them find out how wolves approach and use wildlife corridors in Banff, Harvie Heights and Canmore.

She said the information will also feed into work being done by scientist Adam Ford, who is working with Parks Canada and Yellowstone to Yukon (Y2Y) Conservation Initiative on what makes a good wildlife corridor.

The last piece of research will look at how wolves are using and benefitting from the Bow Valley Parkway mandatory seasonal nighttime ban.

“Radio collar data from the past showed as vehicle traffic increased on the parkway, wolf crossings decreased,” said Norris. “We want to quantify how wolf use of the Bow Valley Parkway has changed with implementation of the restriction.”

The GPS collars are programmed to last between one and one-and-a-half years. The collars are fitted with remote release mechanisms. Once triggered, the collar will fall off the wolf to be retrieved once the wolf leaves the area.

“We can get a lot of information without collaring, certainly through snow tracking and remote cameras,” said Norris. “But with GPS collars we can look at fine-scale movements of wolves, as well as what they’re preying on in summer.”

Parks Canada has been actively monitoring wolves since 2009 to better understand their predation habits and behaviours. They estimate that there are 25-40 wolves in the parks based on snow tracking and photo records.

A wolf pack’s home range can cover over 1,000 square kilometres, and will change and adapt over time as wolves disperse from one pack to another, based on the activity of other wolf packs in the area.