CANMORE – “Matthias [Ahrens] brought the future forward so to speak, and is largely responsible for creating a pinnacle of Canadian success in Biathlon that hadn’t been seen since the time of Myriam Bédard,” Brendan Green wrote to the Outlook .
Apr 10, 2019 3:03 PM By: Jordan Small 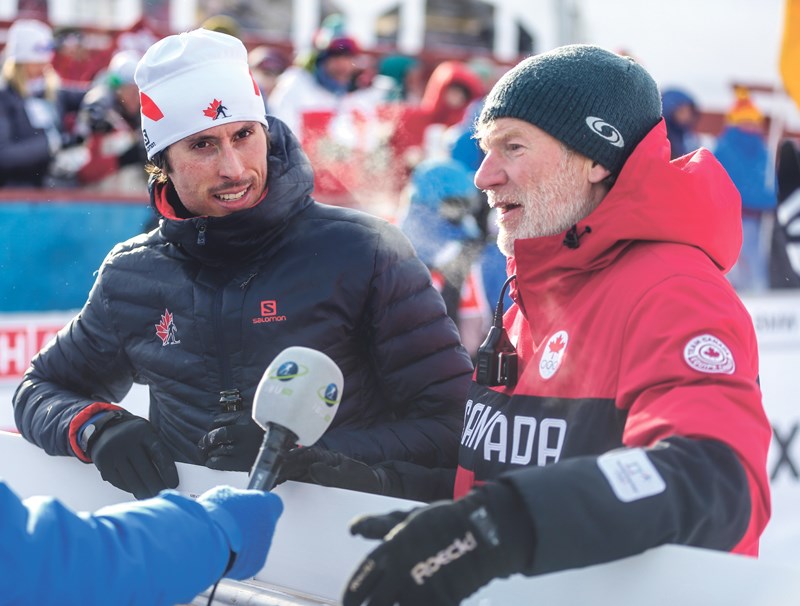 CANMORE – “Matthias [Ahrens] brought the future forward so to speak, and is largely responsible for creating a pinnacle of Canadian success in Biathlon that hadn’t been seen since the time of Myriam Bédard,” Brendan Green wrote to the Outlook.

The three-time Olympic biathlete was happy to speak about his former Biathlon Canada coach of 14 years.

“Most of all I’ll remember Matthias for the fun he brought to Biathlon.”

Ahrens resigned as head coach on April 2 after 15 years with Biathlon Canada.

It was a surprising announcement for Nathan Smith, who trained under Ahrens since the now 33-year-old was 19, but he finished his thought with “change is inevitable.”

“We spent a lot of time together, we knew each other and we knew our strengths and weaknesses,” said Smith, a two-time Olympic biathlete.

“I retired [last December] and now he’s leaving, so it’s a big change for both of us.”

Smith said Ahrens is a very passionate coach and enjoyed being among the athletes, whether it was hiking up Mount Temple together, or delivering refreshing cans of pop during a sticky summer workout.

Rosanna Crawford shared fond memories of being a youngster in the JackRabbit fundamental program, for children aged four to 11, while at the Canmore Nordic Ski Club.

The kids would play “Fox Hunt” and end up in the mine scar where Ahrens greeted them with hot chocolate and treats.

“He was always working hard to go above and beyond just being your coach,” wrote Crawford, a three-time Olympic biathlete, wrote, in an email. “He was someone you could rely on and go to with any problem, inside and outside of sport.”

As Biathlon Canada head coach, Ahrens often spent more time with the biathletes he mentored than his own family.

“They became my family and we went through a lot of different times,” Ahrens said. “It’s been a very emotional decision because of those athletes.”

In a statement on April 2, Ahrens announced his departure from the Biathlon Canada, adding his name to an elite list of those moving on from the team over the past five months, which includes the likes of Green, Crawford, Smith and Megan Tandy.

“As all the athletes that have grown with me in the system of Biathlon Canada are leaving, so will I,” Ahrens said, in the statement. “It was a great pleasure seeing those fine young athletes train, grow and improve under my guidance. Over this period we have transformed into a national team that is now internationally recognized.”

Once a junior biathlete, Green, 32, has intimate knowledge of how the program has advanced since Ahrens came on board.

“During those peak years, the development and progression of Canadian performances were gaining the attention of even the biggest powerhouse nations within Biathlon,” Green wrote. “We were a small team accomplishing some impressive feats with limited resources, and that generated a lot of interest towards our team.”

Under Ahrens guidance, the entire program established depth in its ranks.

A historic highlight for Ahrens and Biathlon Canada in 2016 was winning bronze in the men’s relay, which was the first ever relay medal at a world championships.

“Matthias is a big part of why Canadians have been successful in biathlon and there will be some very big shoes to fill,” wrote Crawford.

A feather in Ahrens cap came in 2014, when he saw that a German Olympic Sports Confederation analyst had listed Canada as a threat in biathlon.

“For me, that’s when I thought we have arrived at international level,” said Ahrens.

“There was a lot of determination and grit on this team … the athletes created an ‘EST’ slogan – Eat, Sleep,

Train – and for many years it’s how we promoted our team and determination to go against all the hurdles we had.”

Ahrens didn’t have a celebratory moment following the announcement of his resignation, instead, he was still digesting the end of an era, while thinking about what he’d do during the first April he’s had off in 15 years.

A job opening for the head coach position has been posted on Biathlon Canada.