The Alberta Junior A Hockey League season is planning a return to the ice later in March, the league announced.
Feb 19, 2021 1:00 PM By: Rocky Mountain Outlook 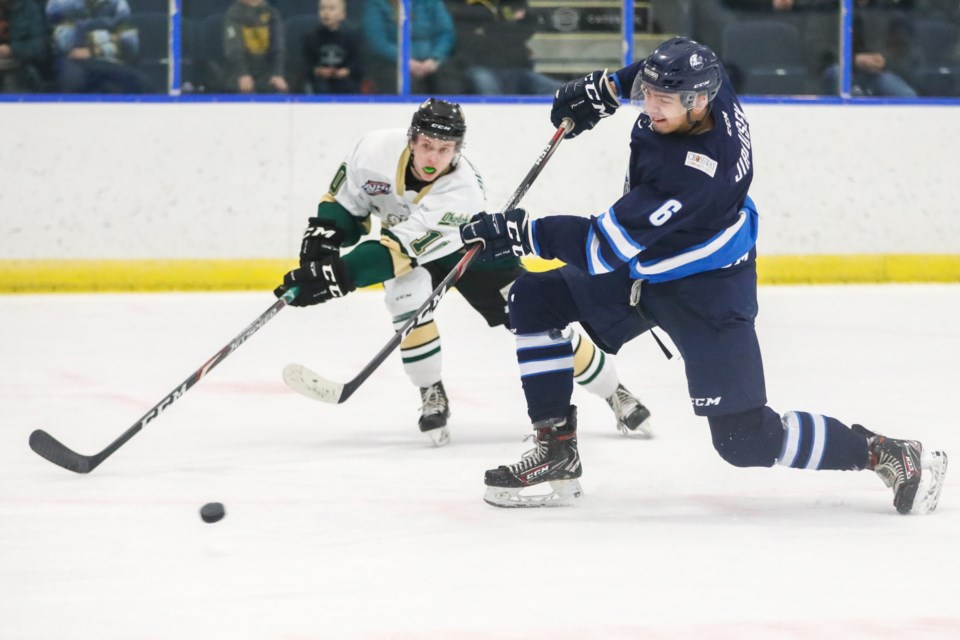 Canmore Eagles Lukas Jirousek shoot a one-timer during a game against the Okotoks Oilers at the Canmore Recreation Centre in 2020. EVAN BUHLER RMO PHOTO⁠

CANMORE – The puck will drop next month after the Alberta Junior A Hockey League (AJHL) was approved to return to action.

On Friday (Feb. 19), the league announced the 2020-21 season will restart in March under Alberta’s protocols of a comprehensive Return to Play Plan.

“We are grateful for the guidance provided by Alberta Health Services and our Chief Medical Officer in developing the protocols required to safely resume the season for our athletes,” said AJHL Commissioner Ryan Bartoshyk in a press release.

A training camp will start things off at the beginning of the month, which players, coaches and staff are currently self-isolating in preparation for.

The season will begin later in March with game play “exclusively on Fridays, Saturdays and Sundays through to the end of May.”

According to the league, teams have committed to utilizing private polymerase chain reaction (PCR) testing through DynaLIFE on a weekly basis throughout the remainder of the season as well as twice before commencing training camp.

"Following the results of two negative COVID-19 tests, and assurance that individuals are asymptomatic as per the SureHire Risk Assessment Program, team members will proceed to team activity at Training Camp," the statement said. "If a member of the AJHL cohort - players or staff - test positive for COVID-19 at any point in the season, the team will be required to isolate and suspend all in-person team activities for 14 days."

There are currently no games scheduled or indication of how many games remain for each of the 15 teams in the league.

Spectators are not currently allowed at games due to provincial restrictions, but games will be available on HockeyTV.

The Outlook will update the story when more information is available.