Just call him the collector. Biathlete Mark Arendz polished off his set of world cup medals with a golden performance on Jan. 23, capping a three medal weekend.
0
Jan 27, 2011 12:00 AM By: Rocky Mountain Outlook 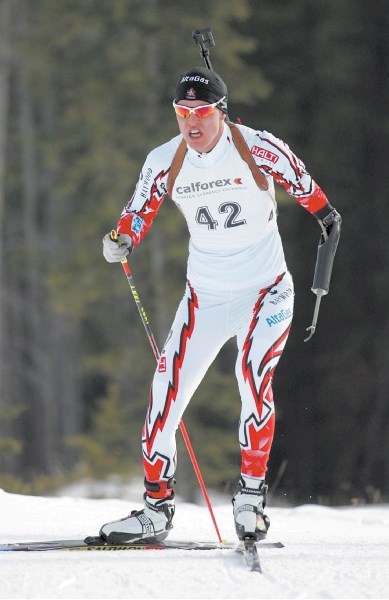 Just call him the collector.

Biathlete Mark Arendz polished off his set of world cup medals with a golden performance on Jan. 23, capping a three medal weekend.

He shot an unbelievable 49 for 50 over the weekend and 20 for 20 in his gold medal race for the win.

“It was incredible. The Sunday race was an incredible feeling. I was getting close to that top result. Last year, I knocked on the podium a few times and now I’m there,” said Arendz, who suffered loss of his left arm above the elbow in a farm accident.

Arendz took the race with a time of 39:35.9, defeating Norway’s Nils Ulset (40:52.1). The medal set included a silver in the sprint and bronze in the pursuit.

“A couple of things clicked, and I put it all together,” Arendz said. “I was able to complete that set.”

“It was a pure biathlon course, which we rarely do on IPC,” Arendz said. “We saw some big climbs and rapid descents at the end. It suits my style and fitness. Hopefully we can do more on the IPC.”

Arendz, who is originally from Prince Edward Island, changed his focus to biathlon this year, training wih Rocky Mountain Racers able bodied athletes, and under the tutelage of Robin McKeever. The results have paid off,

“From the start that was a benefit to me. I shot for more than I’ve ever shot in a year. It clearly shows in the races,” Arendz said.

In biathlon, clean shooting makes all the difference, and Arendz found himself in the zone in Finland.

“It was one of the best shooting days I’ve had. It’s a Zen feeling. I was oblivious to distractions, but very focused at the same time. I found it one morning in a race in Charlo, New Brunswick. I shot clean there. I tried to replicate it there and it worked,” Arendz said.

His on-site coach Kasper Wirz was extremely proud of the young biathlete, who is seeing top results after four years of hard work.

“It was incredible. Every day he got better. He put it all together for the win, shot 20 for 20 and beat all the medallists from the Vancouver paralympics,” Wirz said. “He’s matured a lot. This summer training in Canmore has really helped him.”

Wirz said Arendz has more focus this season and had the right frame of mind going into the race.

“The morning of the race, he woke up giddy, thinking ‘bring it on boys, I want to kill them,’ ” Wirz said.

Arendz has a busy season ahead of him. After returning home to Canmore until Feb. 10, he’ll compete in world cup races in Sweden and Germany. The world championships this year are in Russia, and Arendz hopes to perform well there.

“I’m working on the idea of performance on demand. It never hit me until this week. I would wake up hungry and determined for that result,” Arendz said. “It’s a matter of replicating it.”

“It’s incredible. It’s nice to put four years of work in and have the results. It’s learning to keep that,” Arendz said.