Athletes, volunteers saddened by world cup cancellation, but say it was right move 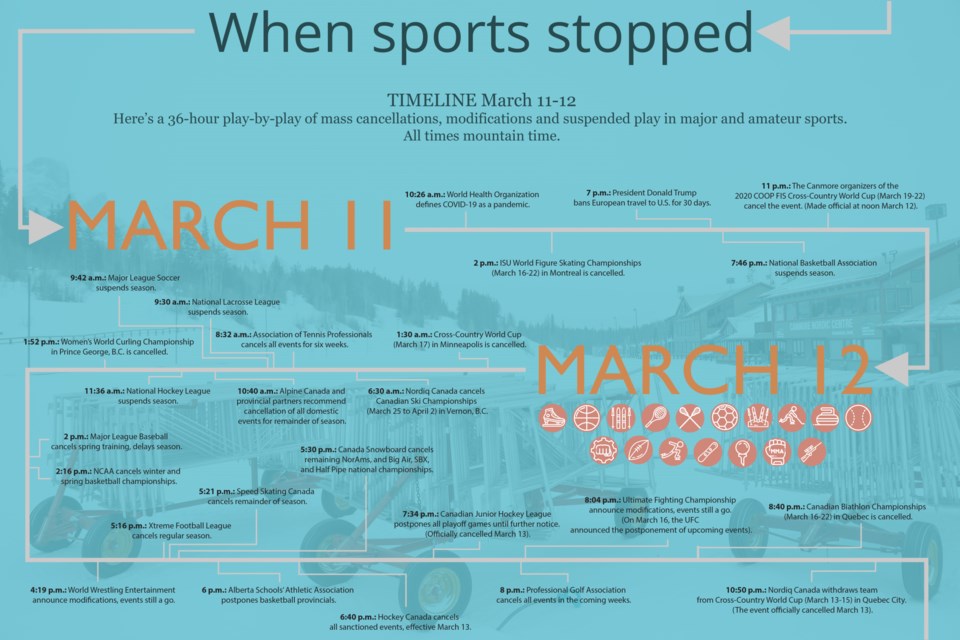 CANMORE – The final few hours of the Canmore world cup’s life was interesting for its organizers, to say the least,  who went from a "go" to "no" due to the rapidly evolving COVID-19 coronavirus.

On Thursday (March 12), organizers officially called off the 2020 COOP FIS Cross-Country World Cup and all events at the Canmore Nordic Centre from March 19-22 for safety reasons amid the global pandemic.

We are still sad about the cancellation, but in the big scheme of things it was the right thing to do. We were about to launch the song commissioned for our event: Giants by singer/songwriter Leela Gilday accompanied with our promo video for the event. https://t.co/ZYd5iNKIv0

The day prior, the social dynamic changed in the world, and that's when the decision was made behind closed doors to cancel the world cup event.

“In a span of three hours [on Wednesday], we took a 180 degrees because of what we saw where this phenomenon has taken elsewhere in the world,” said Norbert Meier, event chair of the Alberta World Cup Society (AWCS).

“We've never seen this, it's unprecedented."

At around 10:30 a.m. that day, the World Health Organization called the COVID-19 coronavirus a pandemic. Still, things were a go for the world cup in Canmore as of 1 p.m.

Meier said the AWCS was keeping close tabs on what was happening in Quebec with the ISU World Figure Skating Championships in Montreal, and world cup races in Quebec City. They were going to use the events as a “poster child” for best health and safety practices.

“At three o’clock, [the World Figure Skating Championships] is cancelled, which led to speculation at what would happen to our own event … so we organized a 9 p.m. phone call with public health authorities,” Meier said.

Before the phone call happened, President Donald Trump banned European travel to the U.S. for 30 days, and the NBA suspended its season. By then, the writing was on the wall and it was a “no brainer” to call off the Canmore world cup, said Meier, adding the decision was made at 11 p.m.

At that point, teams were backing out of the Canmore world cup from countries such as Italy, Sweden, Norway, Korea, and Thailand.

“There’s definitely a sense of disappointment, not being able to perform at home,” she said.

“Taking a step back for myself and thinking globally a bit more, [the cancellation] is not so sad and we’re understanding that it’s not just happening to us, but all sporting events all across the world, and lives have been put on hold. If you look at it that way, it’s totally understandable and this was the right decision to be made.”

On Twitter, Maya MacIsaac-Jones of Alberta, who was also scheduled to compete in Canmore, tweeted the sudden cancellation left her at a loss.

“I was so excited to compete in front of home crowds and to chase my goals once again,” she said.

“To everyone who has supported me this year, thank you. Despite this challenge, I’m motivated for the future.”

After a whirlwind week, with our home World Cups and National Championships cancelled, the ski season is over. This sudden end leaves me at a loss. I was so excited to compete in front of home crowds and to chase after my goals once again.

Just over a month prior, MacIsaac-Jones had finished in a career best 24th at the world cup in Falun, Sweden, and was preparing for the races on home soil.

The season finale in Canmore was scheduled to feature five races – women's and men's mass start, women's and men's pursuit, and a 4X5-km mixed relay – followed by the Crystal Globes presentation to end the 2019-20 season.

Beatty said the home races were a major focus going into the season, and she was looking forward to the historic mixed relay race – the first time it’s been done in North America.

She also wanted to acknowledge the volunteers for putting the effort forward, despite the world cup not running.

SEASON OVER, home World Cups and National Championships cancelled. THANK YOU to the volunteers for the countless hours they put into these events & to the organizations for making the smart decisions as #COVID19 progressed so quickly. Wishing everyone health as things progress. pic.twitter.com/FqtgcaOjOk

Meier added the Alberta World Cup Society, the organizing volunteer group, is saddened by the series of events and said the outbreak "is definitely a factor" in hosting major international events in the future.

"Frankly, it's always been a factor," Meier said.

"You can say none of that changes, what changes is the public health response. In the meantime, we're definitely going forward with our goal to bring world class cross-country skiing events to Canmore.

"What makes us do this, is we are inspired by the athletes that represent Canada, and we want to provide our national team an opportunity to perform at home."