Excitement and anticipation linger among the crowd. Children of all ages scurry up the timber stairs, whispers and laughter echo through the walls. A banner had been signed as a departing gift.
Feb 22, 2018 12:00 AM By: Rocky Mountain Outlook 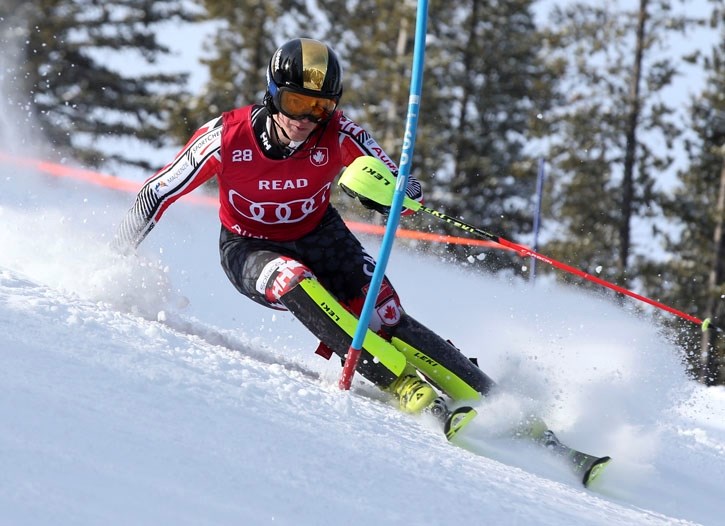 Excitement and anticipation linger among the crowd. Children of all ages scurry up the timber stairs, whispers and laughter echo through the walls.

A banner had been signed as a departing gift. Each person signed with a stamp of good luck, whether legible or not. Some signatures were by parents, some were by old friends and club members.

This day is special, as Olympians and Banff Alpine Racers alumni Erik Read and Trevor Philp had come to train on their old stomping grounds at Mount Norquay before departing for PyeongChang.

Cookie medals decorated in Olympic fashion were symbolically awarded to both Read and Philp. Smiles and laughter are exchanged. Neither Read nor Philp have been to a Cookie Cup ceremony in a decade.

“I just love the energy that we’ve been experiencing in the last week that we’ve been up here ... Just to see the excitement and the amount of support the hill is willing to get for us. Everyone is wishing us the best for the Olympics. It’s just so cool to see it in the state that it’s in right now,” said Philp.

Philp and Read both grew up in the Bow Valley and began skiing for Bow Valley Quickies at an early age. Being one year apart, Read and Philp would end up spending the next 15 years together on the racetrack.

Mutual dedication and drive shared by both Read and Philp continued to develop throughout their early years together. As the years progressed, so did Philp’s and Read’s friendship, “… he has become one of my best friends. To be able to travel the world with him, to face new challenges, and really see what we can do on the world stage, it’s cool,” said Read.

Philp echoes the notion of positive competition and shared experiences.

“It’s neat because for me, Erik is a year older, so every other year I’d get to ski with him. But he was always the best growing up so it was always me trying to keep up or catch up. He’s been pushing me my entire life, and how many years later we are still pushing each other. It’s probably more of a mutual push now, it’s a great relationship and it’s so cool to be here now,” Philp said.

While Read hopes to step onto the podium, his personal goals for his first Olympics are to carve out a spot in the top 10. He just missed that goal with an 11th-place result in the giant slalom. Philp skied to his second games, and finished 18th in the giant slalom. Both athletes were also expected to compete in the slalom.

Both skiers passed on sage words to the younger generation of Banff Alpine Racers athletes.

“Enjoy the process, enjoy all of it. For sure there is a lot of hard work that goes into it, but you have to find enjoyment in the process as well as the training and the going out and the skiing and the dryland and the friendships. So work hard, but enjoy the road along the way.” Philp said.

“I would say keep a long-term goal in mind, but pay attention to the details and have as much fun as you can along the way. It’s such a cool opportunity that we have to travel the world, build these relationships and strive for a goal – achieving it or doing your best along the way,” Read said.