For the Banff Men’s Rugby Football Club, it was a wake-up call. The men’s rugby team lost their first regular season home game in three years, breaking one of the most respectable undefeated streaks in the valley.
Jun 30, 2011 12:00 AM By: Rocky Mountain Outlook 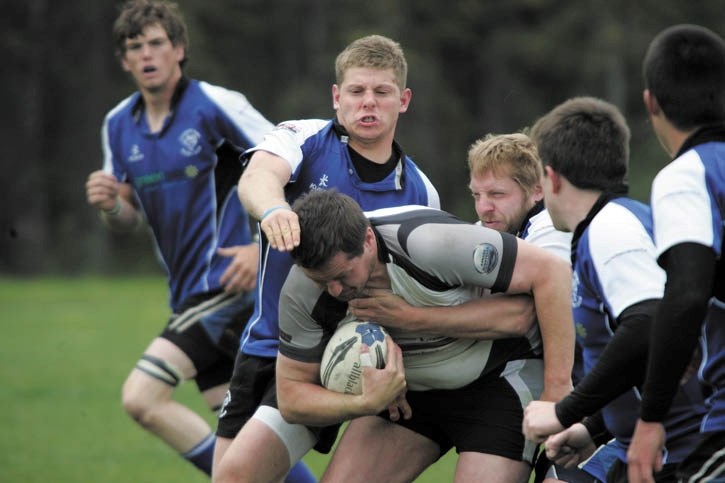 Mark Hooper fights off multiple tackles during Banff’s 27-7 loss to the Calgary Rams Saturday at the Banff Rec Grounds.

For the Banff Men’s Rugby Football Club, it was a wake-up call.

The men’s rugby team lost their first regular season home game in three years, breaking one of the most respectable undefeated streaks in the valley.

The loss came at the hands of the Calgary Rams – a team Banff defeated soundly in the playoffs last season. The bigger, stronger and more disciplined Rams squad earned their revenge with a 27-7 win, Saturday (June 25) at the Rec Grounds.

“The Rams are one of the best teams in the league; I don’t want to take anything away from them, but we made their win look easy,” said player/coach Mark ‘Hoops’ Hooper. “It wasn’t pretty.”

The Rams set the tone early, breaking through the unusually porous Banff defence for a quick 5-0 lead. A failure to control a deep kick then put Banff on its heels, and before the team had time to regroup, they were in a 10-0 hole.

In the second half, Banff appeared poised for a comeback when dependable captain Steve Lower seized the ball and ran it into the Rams zone from the 30-yard line. Changes to the forward line improved the team’s play and the home team appeared organized.

However, a myriad of mistakes put Banff in danger again. Missed tackles, bad penalties, poorly placed kicks and lost rucks cost the home squad dearly, and they soon gave up three consecutive tries. By the time the dust settled, the Rams had a 27-7 win.

“Our lineups were off, our turnovers were bad. We weren’t clinical today,” Hooper said.

Banff also lost two players to injury, including Fernley Simmonds, who will miss the next few games with an ankle injury.

Hooper said the team was playing ‘as if it was in quicksand,’ as the more they struggled to come back, the deeper the hole they dug.

Losing the undefeated streak hurt the pride of several veteran members who know they’ll need a better effort if the squad is to rebound.

“We need the boys to stand up and be counted. It’s hard when so many let you down and some of them were ashamed,” Hooper said, whose frustration boiled over on the field in the second half.

Hooper went so far as to question the commitment of some of the players, calling for more discipline.

“That means not going out and getting drunk on a Friday night,” Hooper said.

“The effort wasn’t there. We played these guys in the final last year and knew we had to execute, but there was a lack of commitment on the field,” McKay said.

The message seemed to reach some of the players.

“There shouldn’t be another loss for the rest of the year,” said McKay.

The team is off this coming weekend and won’t get a chance to play at home again until Aug. 6, when they play CCIAC. Their next away game is on July 16 against the Canucks.