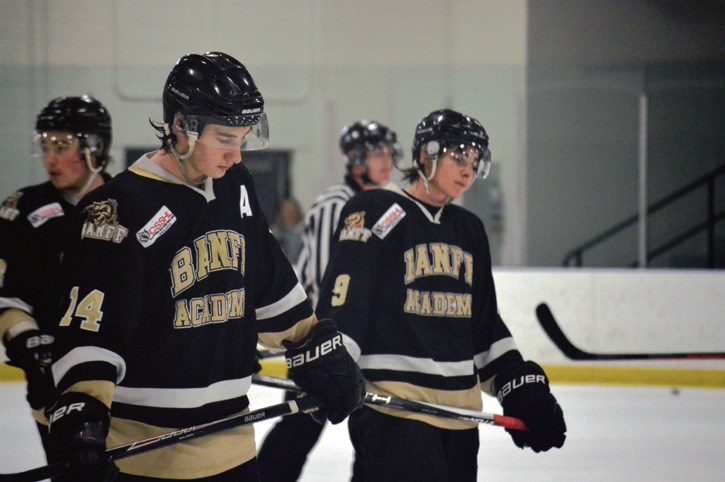 BHA Bears' Hunter Harrison (#14) and Phil Schader skate to the handshake line after being swept in four games in the 2017 HJHL playoffs by the Cochrane Generals. RMO FILE PHOTO

On Saturday (May 16), the program announced it will be known as the South Alberta Hockey Academy (SAHA) and will replace the BHA Bears in the Canadian Sport School Hockey League (CSSHL) with its newly selected U18 male and female prep teams.

“As you can imagine, after 25 years in the Bow Valley, there are so many positive memories as we recount the students, teachers and community members who supported their collective development during our tenure in Banff,” said BHA founder and president Bill Doherty, in a press release.

“The history of our program runs deep in our hearts and souls and is filled with gratitude for our time together.”

Willie Desjardins, owner and operator of SAHA, a skills academy in the greater Medicine Hat area, will oversee the change of management during the relocation.

“We are excited to offer our student athletes the opportunity to learn and train with academic and athletic staff and we are looking forward to getting back on the ice,” said Desjardins, in a press release.

We are excited for this opportunity and looking forward to our new journey #saha #csshl pic.twitter.com/8fUyUs6x6Q

“We are excited for what lies ahead with the South Alberta Hockey Academy,” said Kevin Goodwin, Chief Operating Officer of the CSSHL, in a press release.

“The southeast corner of Alberta is a good fit for our league and will assist linking existing programs in Alberta, Saskatchewan and Manitoba. We are appreciative for all the great memories the Banff Hockey Academy has provided the CSSHL since 2009.”

In Banff, the student-athletes attended Banff Community High School and the program's home ice was at Banff Fenlands Recreation Centre. For the past three seasons, the BHA teams primarily competed in the CSSHL.

“We are very excited about the opportunities that exist for the program in Medicine Hat,” said Doherty.

“We are confident that the blend of our experience in the accredited school market, coupled with the reputation and leadership of Willie Desjardins and the Prairie Rose School District will prove to be synergistic at every level of the operation."