Alberta's decision to continue restrictions for local gyms and fitness studios was "another gut punch" after an already tough year.
Jan 27, 2021 9:51 AM By: Jordan Small 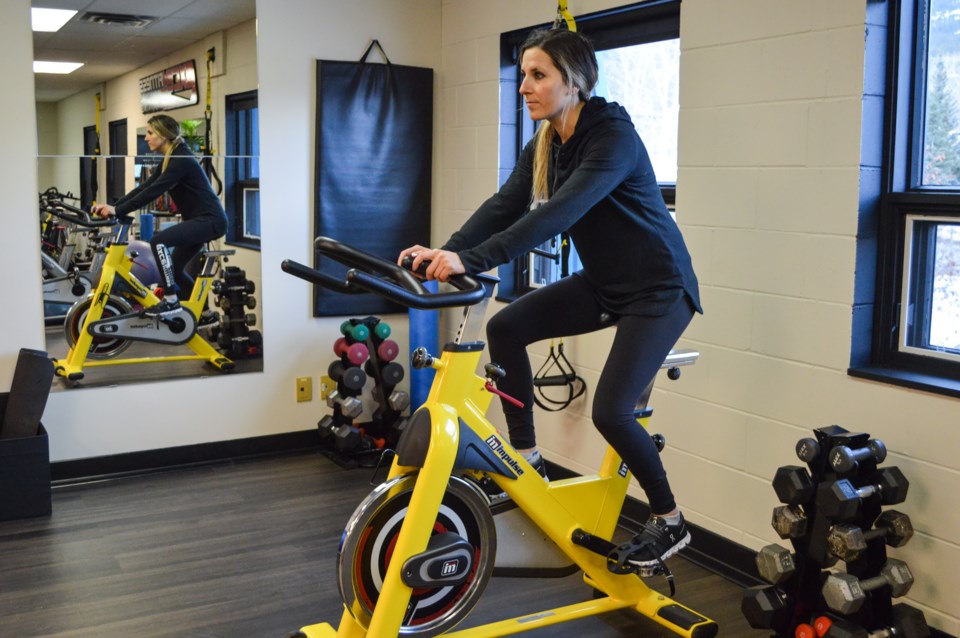 Christa Chasse, owner of Excel Fitness in Canmore, shows off the roomy renovated space inside her gym that offers greater social distancing. As of Tuesday (Jan. 26), Alberta is continuing with its province-wide restrictions that keep gyms and fitness studios closed. JORDAN SMALL RMO PHOTO
BOW VALLEY – As gym and fitness studio owners were told their businesses would have to remain closed, it was like “getting another gut punch” before being left in the dark about when customers would be finally be able to walk through their front doors again.

Frustration with being locked in a bleak waiting game with Alberta is peaking, and with rent due in the pricey Bow Valley, keeping customers shackled out while other businesses are open is a problem that has puzzled and disappointed the fitness industry that's prepared to go.

The sentiment of the owner of Excel Fitness in Canmore is like many other fitness operators province-wide who are loudly clamouring to be unchained after Alberta's Jan. 21 announcement continuing restrictions for six weeks and counting, and with no clear answer on when it will end.

“Rent comes up every month and you now are going into another month not knowing – [and] your head starts to spin a little bit not knowing when you’re going to open; it's getting very stressful as weeks go by and you have no answer,” said Chasse.

In business for over a decade, Chasse relies on in-class groups to make a living. Like most fitness businesses, she’s adapted during the COVID-19 era to get her product to as many eyeballs as possible.

She’s gone online with fitness classes for paying users, and she renovated her studio to make it a safer and more roomy environment.

But one thing most gyms and studios have encountered is going digital isn’t the money-maker the same way as when doors were open.

This is for a number of reasons, such as instructors finding it difficult to motivate clients to be in front of a computer screen; the headache for clients to learn and use newer technology; and other activities people can do, instead.

Mandatory, provincewide restrictions are in effect due to #COVID19AB. All indoor social gatherings are prohibited.

Close contacts are limited to household members only, except for people living alone, who can have up to 2 close contacts.

Many businesses expected the province and Alberta Health Services to ease restrictions last week, but even with a decline in positivity rate, active cases, and hospitalizations, and despite the COVID-19 vaccine being distributed across Canada, Alberta’s top doctor noted some businesses’ doors would have to remain closed – like gyms.

One reason for the cautionary measure is Alberta has the second worst active rate per capita in Canada.

“I know that current restrictions are very difficult for many Albertans including business owners. As I said [on Jan. 20], we are on a positive trend … at the same time, we are not in the clear just yet,” said Chief Medical Officer of Health Dr. Deena Hinshaw.

“That is why no additional measures are being eased at this time.”

“People gain so much from being able to work out, you develop good physical health and mental health,” he said. “Both mental and physical health have shown to make your immune system significantly more effective and in a time where this is critical it seems absurd that it would be withheld from everyone.

"I think restricting all forms of this, as well as not allowing gyms to be open, is somewhat of a scare tactic or a response without taking all the information into consideration."

At Summit Lifestyle & Performance in Banff, owners Ash Baker and Mathieu Lavigne took over the downtown crossfit gym last summer, and have just recently qualified for government subsidies to help with rent, but “there’s only so much you can be prepared for and pay for when your business isn’t open.”

“It was really great to see so many of our local businesses that we love and support open again, but in a sense, it was frustrating to see retailers and malls and other businesses open where people are literally in physical contact with each other,” said Baker.

“Yet, in our gym, we take all the safety measures possible for us wearing masks, having individual squares, maintaining proper distance and sanitizing, and yet, there was still no word for us opening or opening with restrictions."

At face value, the industries hit hardest in the Bow Valley are restaurant and hotels – the economic drivers of the resort mountain towns.

But for those workers who are the glue of the tourist towns, while being laid off/unemployed or wanting a physical space to work out in, their dollars aren’t going to the local fitness industry at this time.

Like most small gym and studio operators, Summit Lifestyle converted programming online in response to the restrictions in order to help pay the bills.

Sarah-Jo Wasylkiw, a regular at Summit Lifestyle prior to the latest restrictions, said she kept up with online classes during the first lockdown, but with the great amount of activities she can do during winter, she’s been staying active on the ski hills and in the backcountry instead of in front of a computer screen.

Wasylkiw added she is eager for gyms to reopen so she can return to the sport she's grown to love.

"It's been difficult missing crossfit as a daily activity as well as socialize with the regulars. It's like a family there,” she said.

The fact Alberta didn’t ease any restrictions on Jan. 21 was troubling for most.

In the tourist towns, it's not as easy to grow a fitness centre client base as it is other industries, according to one local business.

“The one huge thing with a gym that’s different than a restaurant is it takes you a year to build a membership and momentum,” said Neil Fox, owner of Life Works. “All my money comes from local people – we don’t make money off tourism.”

Fox and his partner Jessie have operated the gym in Canmore since 2003 and are utilizing online classes during the latest restrictions.

They said they’re understanding as to why restrictions are extended, and there have been positives, such as the little family moments and spending more time with their young son.

But business-wise, COVID setbacks over the past 10 months has had a 50-60 per cent decline in their membership, which will likely put them into a rebuilding phase for a few years.

“You build 18 years, 18 years to get where you were at,” said Jessie. “We were doing so good before COVID and then now – it is very heavy, I would just say.”

In karate, the saying “Osu no seishin” means perseverance through adversity, which rings true during these rough times for Daymon and Julie Miller, owners of Banff Kyoukshin Karate & Fitness Kickboxing.

Not surprised by restrictions continuing, Daymon said it still felt like getting another gut punch after an already tumultuous year.

“We’ve been around for a long time and … we’ll survive this, but it definitely puts some added pressure on paying bills and that’s the uncertainty,” said Daymon.

“It’s a little bit different for us as my livelihood isn’t really depending on it, but there are some gym operators, and in some cases, friends of mine who are dojo operators. This is their livelihood and that’s tough. I cant imagine how this must be for those folks.”

For those who’ve built up their small local businesses over the years, like Fox and the Millers, they said they’ll make it work and get past this.

But there are others who won't be so fortunate.

One in five Canadian businesses are at risk of closing by the end of the pandemic, according to new estimates by the Canadian Federation of Independent Business (CFIB).

One of the most at risk sectors in Canada is recreation, which includes gyms and studios, “with roughly one in three businesses … actively considering closure.”

“2021 isn’t off to a great start for small business,” said Laura Jones, CFIB’s executive vice-president in a press release. “It goes without saying that supporting local is more important than ever. Governments can also help small businesses replace subsidies with sales by introducing safe pathways for them to reopen to limited customers.”

As of Tuesday (Jan. 26), the Alberta government hasn't hinted at any timeline for the next announcement on which restrictions may be eased.

For many local businesses like Summit Lifestyle, they are now waiting in the dark with “fingers crossed” for whenever that comes.

"The hardest part for us is it's still unknown for studios and gym," said Baker.