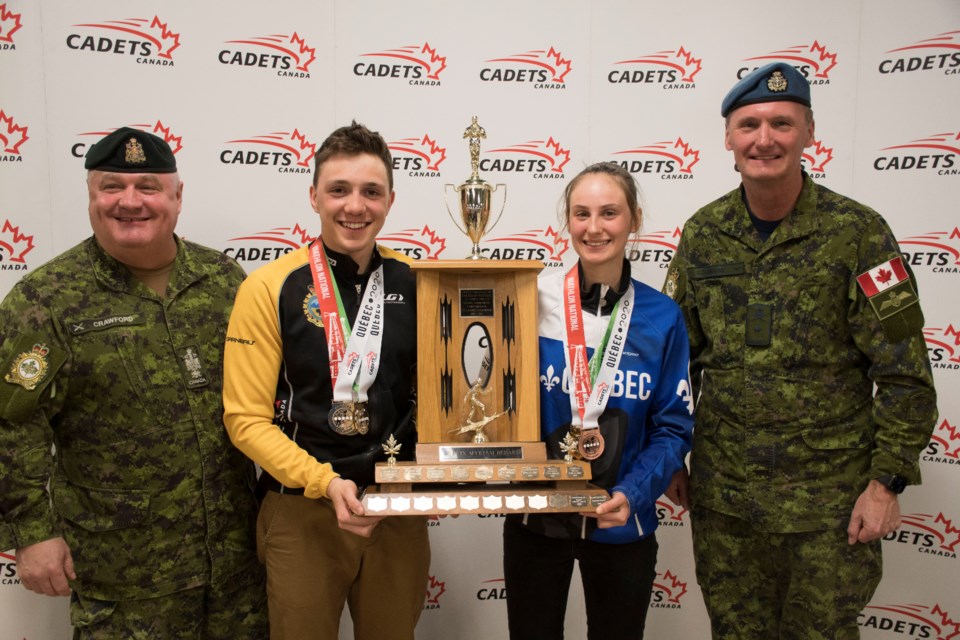 QUEBEC – Arman James Soheili hit a bull’s eye when he needed it the most.

After skiing and shooting to top spot as a male youth at the National Cadet Biathlon Championship in Valcartier, Que. Saturday (March 7), Soheili claimed the Myriam Bédard trophy after six years of gunning for it.

“It’s a really big deal for me. I almost got a bit emotional,” said Soheili, who is from 878 Banff-Canmore, Royal Canadian Air Cadet Squadron in Canmore.

Among the best cadet biathletes in the country aged 12-18, the award is given to those with the top individual results in three categories.

His six-year journey to the trophy was filled with runner-ups as a junior and senior, which weighed on the mind of the cadet heading into the championship races.

“I turn 19 in two months and I can no longer participate as a cadet, so it was now or never,” he said.

The snow was perfect for the four-day championship races, the temperature hovered around 0 C,  and the “up and down” course was very straightforward, Soheili said, adding he felt fast on his skis each day.

In the 7.5-kilometre sprint, Soheili finished in second behind biathlon rival, Aidan Hupé from the Yukon, who was 30 seconds in front.

In the 10-km mass start, the final individual race, Soheili won his first ever gold medal at the national championship, topping Hupé by 90 seconds. The local cadet shot 13/20 with clean shooting while standing.

Off the course, the two are friends, and they help push each other on course.

"[Hupé] was the first person to come up and say, 'good job, I'm proud of you,' " Soheili said. "I've been racing against him for six years now and we have always been head-to-head."

Originally from the Surrey, B.C. area, Soheili moved to Canmore last summer to begin training at the Biathlon Alberta Training Centre under former national team head coach Matthias Ahrens, who says the young biathlete has made leaps and bounds in shooting and skiing since joining the club.

"It just shows [that with] the right learning and attitude how much can be attained in a short period of time," Ahrens said. "I'm not surprised, given how much he trains and has developed over the winter that he's competing for podium spots."

Soheili says he’s at the Canmore Nordic Centre once or twice a day, six days a week, training for his goal to reach the international stage.

"Without the Cadet program, I wouldn’t be where I am today as a biathlete ... I aim to be on the level of former cadet Olympic athletes like Emma Lunder, Jean Phillipe Leguellec and Myriam Bédard," he said.