CANMORE - The Canmore Eagles wasted no time recruiting players to join the mountain town club for the 2019-20 campaign, filling a big void left by departing veterans.
0
Jul 4, 2019 6:00 AM By: Jordan Small 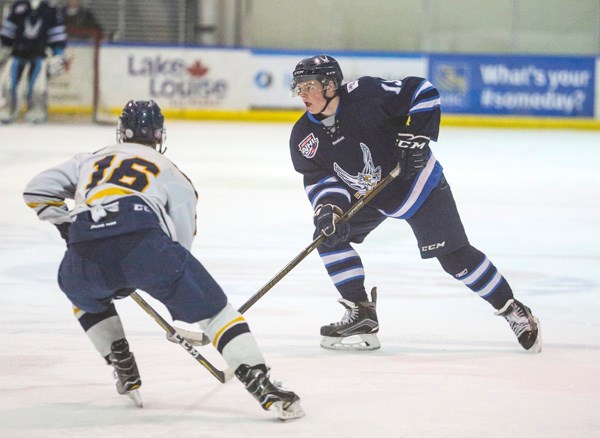 CANMORE - The Canmore Eagles wasted no time recruiting players to join the mountain town club for the 2019-20 campaign, filling a big void left by departing veterans.

The past four weeks in Eagles-land has seen plenty of change with the junior A club unveiling a shiny new logo for the upcoming season and inking eight deals with new prospects from the Alberta Major Hockey League (AMHL) and the Kootenay International Junior Hockey League (KIJHL).

“We feel like we’ve recruited really well this summer and filled some of those voids and got a good talented group of kids coming in,” said Andrew Milne, Eagles head coach and general manager.

Last season, the Eagles were eliminated in the second round after a high-paced and thrilling series against the Brooks Bandits, the AJHL’s 2018-19 champions. When the offseason started, key veteran players for that playoff run, including goaltender Thomas Davis, forwards Quinton Ong, Taden Rattie and Colton Young and defencemen Daly Hamilton, Mark Drohan and Jesse Sheen, all departed from the Eagles.

“I think upfront, obviously we lost some guys, but the key guys in the backend, losing Mark Drohan and Daly Hamilton, you lose a couple guys there that are big components … and that’s something we’ve been challenged to do is find some D and other guys are ready to step in,” Milne said.

When June hit, so did recruiting season and defenceman Tayler Miller was first to sign a letter of intent to play for the Eagles, helping to fill a big hole left at the blue line.

Miller, 17, billed at six-foot, 181 pounds, led the AMHL in scoring as a blue liner, averaging a point per game (14 goals and 35 points) while serving as captain of the Hurricanes.

Tristan Kimmen, 16, is the third Hurricane to join the Eagles. The six-foot-one forward had 10 goals and 19 points in 30 games
last season.

Kimmen said he’s eager to show off his skating abilities he’s been working on over the offseason to the Eagles faithful.

“I really prided myself on being one of the best skaters in my age group and I like to use it on both ends of the ice,” Kimmen said. “It’s one of the things I’m really trying to work on over the summer, is a 200-foot game, but definitely my skating, I think its my biggest strength.”

The Eagles also announced Ethan O’Halloran of the AMHL committed to the team.

At only 15 years old, O’Halloran is the youngest Eagle to sign in June. In 34 regular season games with the Calgary Midget Flames, the five-foot-11 defenceman tallied 18 points.

The Eagles also scouted westward and three players from the KIJHL have joined the junior A for the upcoming season.

Forward Lane Paddison, 18, formerly of the Kelowna Chiefs signed a commitment to Canmore. He finished sixth overall in scoring in the Kootenay International Hockey League last season with 26 goals and 68 points in 48 games.

Forward Ethan Schaeffer, who played for the Revelstoke Grizzlies last season, signed a letter of intent to play for the Eagles.

On Tuesday (July 2), the Eagles announced defenceman Matthew Cadden, 18, signed a commitment for the upcoming season.

The former Revelstoke Grizzly had 11 goals and 32 points last season.

Cadden and Schaeffer were key pieces for the Grizzlies in capturing the KIJHL 2018-19 championship.

“We’ve signed some pretty good players in there and we’re excited about that,” Milne said.