A series of exhibition games for Alberta Junior Hockey League teams set to begin Oct. 9 will not include the Canmore Eagles
Oct 6, 2020 10:00 AM By: Jordan Small 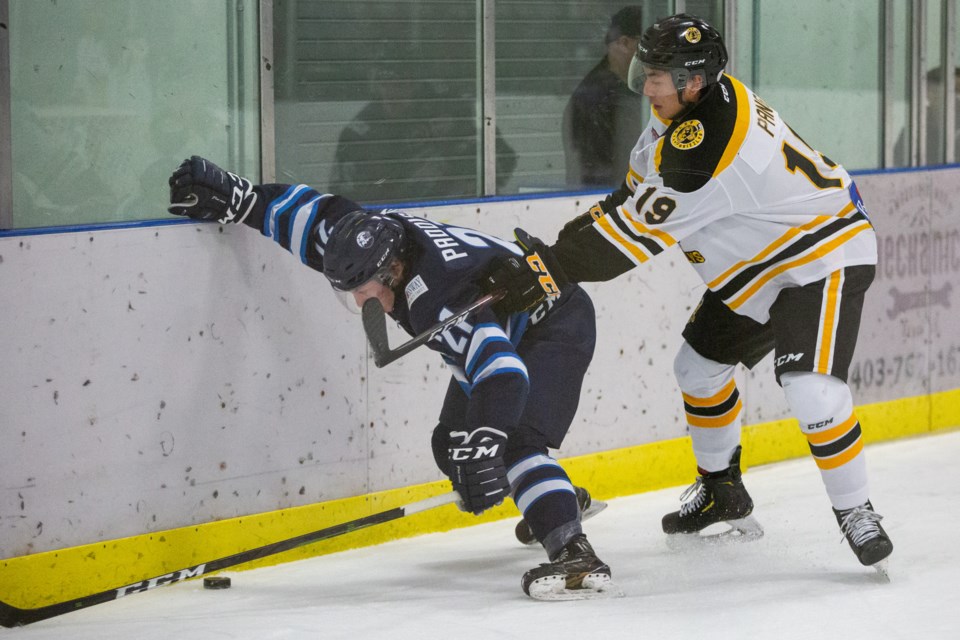 Canmore Eagles Lane Paddison is checked into the end boards by Olds Grizzlys Tyler Pang during a game at the Fenlands Banff Recreation Centre in 2019. EVAN BUHLER RMO PHOTO

The AJHL announced Thursday (Oct. 1) that seven sets of six exhibition games are scheduled between Oct. 9-24 with play being restricted under provincial regulations that currently only allows mini-league cohorts of 50 – or two hockey teams that will exclusively play each other.

With one notable omission from its scheduling, the absence of the Eagles surprised local hockey fans as well as the club’s head coach and general manager Andrew Milne, who was caught off guard and said the club’s “situation changed over a couple weeks” since the survey.

“Once we made the comment weeks back that we weren’t interested in playing an exhibition season without a season in mind and or fans, along with the other information, it just didn’t make sense and I got a little bit of a blindside when I see that – this is not an exhibition season, in my opinion, this is just a cohort," he said.

At the time of the league-wide survey, which Milne said was emailed mid-September, the club’s home arena, the Alex Kaleta, wasn't ready in the Canmore rec centre. Milne said dressing rooms weren’t being utilized and they weren’t allowed to have 100 fans inside. Since then, the Canmore rec centre has opened up to better accommodate players and fans under provincial recommendations surrounding COVID-19.

Milne added the Eagles and its players, who arrived at camp Sept. 20, would have been ready to play in the Oct. 9 exhibition series.

“I asked him [Ryan Bartoshyk, AJHL commissioner] straight up, what is he is going to do to make us not look stupid and he didn’t have an answer for me, so that discouraged me a little bit," said Milne. "I have to take full responsibility for making that comment, but I made the comment with the information I had at the time. I’m disappointed I wasn’t able to change that comment with some more questioning."

In an email to the Outlook, Bartoshyk said each junior A club was surveyed about playing exhibition games.

“Based on existing guidelines and the feedback received from our members through this survey, initial exhibition play was structured by the AJHL,” said Bartoshyk.

The Outlook requested an additional interview from the AJHL and the story will updated if more information becomes available.

The AJHL, a 15-team league, spoke to provincial health authorities about expanding the cohorts. However, a Sept. 25 email from the league to its club said the province wouldn’t budge on its current stance and the league would be sending more information about a potential season on Oct. 9. According to Milne, that was the last correspondence the league had with the Eagles before the Oct. 1 press release that announced the 14-team exhibition schedule.

“Things have definitely changed in the COVID world and I don’t think the league had much communication since then explaining as to what that cohort was going to look like," Milne said.

"A decision on the next series of exhibition play and the AJHL regular season will be dependent on the expansion of cohorts and increase in facility capacity limits as determined by the government of Alberta. The Alberta Junior Hockey League is poised to immediately commence regular season competition when provincial regulations allow," the statement said.

The first series of exhibition games from Oct. 9-24 will be played exclusively in these matchups.