Despite a rocky start to the AJHL season, a flurry of trades and first round playoff exit, Canmore Eagles head coach Andrew Milne feels positive moving forward
0
Mar 20, 2020 10:00 AM By: Evan Buhler 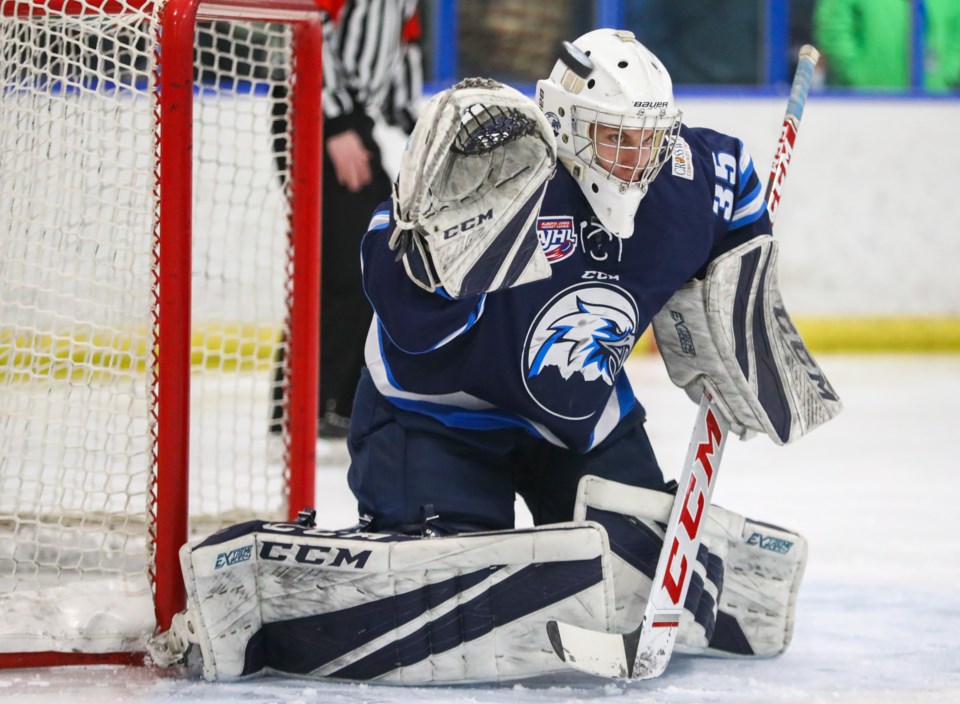 Goaltending was a constant struggle for the Canmore Eagles in the 2019-20 season. EVAN BUHLER RMO PHOTO⁠

CANMORE – It was a difficult year for the Canmore Eagles, the team struggled to catch a break.

Even if the Eagles defeated first round opponents, the Camrose Kodiaks, the team’s season would be finished due to Hockey Canada canceling all sanctioned events, which included the AJHL playoffs due to the COVID-19 novel coronavirus.

Eagles head coach Andrew Milne described the season as a “rollercoaster of year.”

“Things did not go as smoothly as we had anticipated at the beginning of the season, we felt that with the core guys we had returning – we were set up to have more success than we did,” Milne said.

That core group of players under preformed and failed to make a positive impact both on the ice and in the locker room.  Tian Rask, Max Giangualano, Brent Schuldhaus and Logan Dyck were poised to lead the team this season, but didn't to produce, which Milne said forced his hand to make the trades he did.

“We had to change our blueprint, and that wasn’t something that was just going to be an overnight fix. Following the trades at the trade deadline the changes that we made had a positive impact in our club that we feel good with moving forward.”

Goaltending was a major sore spot for the Eagles in the 2019-20 season. After a rocky start and trading Logan Dyck, then signing Kadin Kilpatrick, the situation looked to stabilize for an eight game stretch. That stability didn’t last and it was a constant battle to regain consistency in net, flip-flopping between Kilpatrick and Devin Chapman.

Both Kilpatrick and Chapman struggled to keep the puck out of the net, as the tandem’s goals against average was over four, and the pair combined for just 20 wins.

“The goaltending this season was like Jekyll and Hyde – there were signs we were moving in the right direction and ultimately their hot and cold spells worked against us in the end," said Milne.

"We felt we could score and we had confidence offensively but we just couldn’t keep the puck out of our net."

The Eagles' bench boss said that burden could not be solely placed on the goaltenders' backs, adding the defensive core was not very good for a long stretch of the season.

Moving forward, Milne is positive about the defence core being anchored by Dylan Witzke, Cameron Chin and Zach Cunningham.

A slow start to the season buried the Eagles and disabled the team’s confidence, something Milne said is incredibly fragile for teenage boys.

“We battled mental health all season," he said.

"You know these teenage boys are fragile when their confidence is down. They are under such great pressure to perform and it’s difficult to boost their spirits when things aren’t going their way.”

With the Canmore Rec Centre undergoing renovations for the first two-and-a-half months of the season, the Eagles struggled on the road, which Milne said added to the team's early struggles.

“It may not seem like a lot to play those games in Banff and to have a shortened exhibition season, but confidence and being comfortable is so important to success in junior hockey.”

Looking ahead to next season, Milne feels confident about the depth of the roster, despite losing the team’s top producers Alex Young and Connor Lyons, adding there are 10 more players chomping at the bit to fill those positions.

“We will not replace Alex and Connor as individuals, but as a whole and the experiences we gained this year will only help us.”