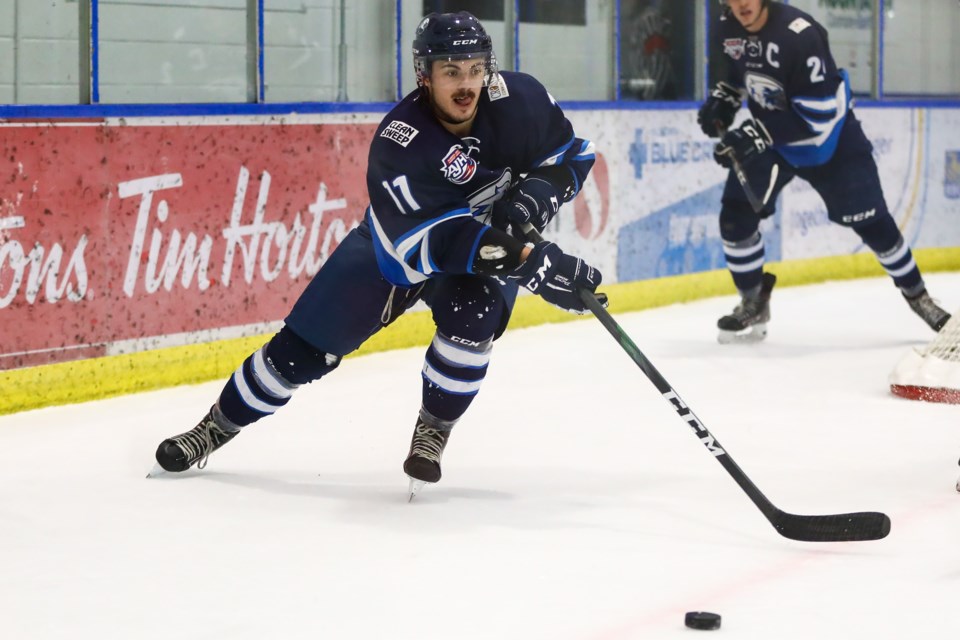 Canmore Eagles Spencer Moe jumps on a loose puck in the corner during the 2020-21 season opener in Canmore. EVAN BUHLER RMO PHOTO

CANMORE – The Canmore Eagles hockey club will not participate in the remainder of the 2020-21 season.

On Sunday (Feb. 21), the Eagles announced the team has opted-out of the Alberta Junior A Hockey League’s (AJHL) restart next month due to “challenges in meeting the requirements of the approved Return to Play Plan and of existing restrictions due to COVID-19.”

“We have worked tirelessly through several options, not only within the town of Canmore, but also exploring possible solutions to work with other communities. Regrettably, we have not been able to arrive at a workable solution," stated a press release.

“We are extremely disappointed for all those involved, including the players, and especially graduating players, but feel we have no options which will conform with the Return to Play Plan in conjunction with current AHS guidelines.

"We would like to thank the Town of Canmore and its residents for the support given during these uncertain times.”

The Eagles’ decision comes two days after the AJHL announced its return to the ice in March after it halted the regular season last December.

Teams start training camps early next month and competition will follow later in March with game play exclusively on Fridays, Saturdays and Sundays through to the end of May.

There are currently no games scheduled or indication of how many games remain for each of the 14 teams participating.

In the COVID-era, the Eagles 2020-21 season was strained with a series hardships.

In pre-season, the Eagles were blindsided and left off an initial seven-game pre-season calendar following survey feedback from the local club’s head office.

During the regular season, the club went 2-0 in regular season action, defeating the Drumheller Dragons twice in a home and away in November. But the team was hit with a COVID-19 outbreak following the bus ride home from the Badlands.

At least 15 players and staff were exposed and tested positive later that month.

Eagles head coach, Andrew Milne was then punished by the league for speaking openly to the media about a COVID-19 outbreak that affected his team.

He received a 15-game suspension and $1,000 fine, which was paid through a GoFundMe by supporters rallying behind the coach.

The Outlook will update the story when more information is available.