Just after returning from duty at the World Junior A Challenge, Canmore Eagles' forward Alex Young has been invited to the CJHL Prospects Game in January
0
Dec 19, 2019 1:00 PM By: Evan Buhler 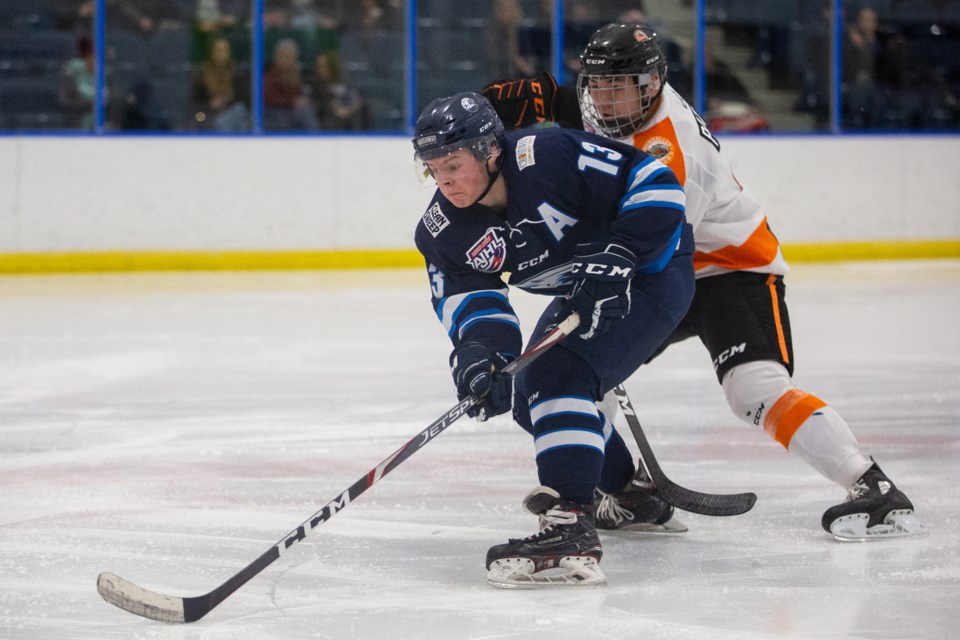 Canmore Eagles’ Alex Young holds off Drumheller Dragons defender Joel Patsey as he drives to the net during a game at the Canmore Recreation Centre on Saturday (Dec. 14). EVAN BUHLER RMO PHOTO⁠

CANMORE – Just as soon as he returned from the World Junior A Challenge, Canmore Eagles’ forward Alex Young received news he will hit the road once again.

Young has been named to the Team West roster for the 15th annual Canadian Junior Hockey League (CJHL) prospects game, which will take place on Jan. 14, 2020 in Hamilton, Ont.

“It’s a huge honour to be invited – I wasn’t last year,” said Young. “I think it’s a testament to all the hard work I’ve put in this year and it will be exciting to show what I can do in front of the NHL scouts.”

The 18-year-old is one of eight AJHL players named to the roster last Monday (Dec. 16). The players chosen to play in the CJHL prospects game were hand picked by NHL Central Scouting and are currently among the top 40 CJHL prospects heading into the 2020 NHL Draft.

“It’s another great opportunity for Alex to showcase what he does best, which is playing hockey,” said Eagles’ assistant coach Evan McFeeters.

In Dawson City, B.C. at the World Junior A Challenge, Young and Team Canada West struggled to find chemistry and as a result were the first team eliminated from the tournament. Despite the poor result, Young felt positive about his personal play at the “high class event" and said he wants to use the tournament as a learning experience for himself and the Eagles.

“On a team like that where you have so many high skilled players, you have to realize that you might not be the one scoring goals out there and you might have to change up your role and do the little things instead,” said Young.

He said that is something he can apply to playing with the Canmore Eagles. Young made his return, from competing on the world stage, to the Eagles lineup last Saturday in a 5-2 defeat on home ice to the Drumheller Dragons.

“Getting Alex back was a big boost; however, I think he really wanted to make a strong comeback from the Junior A Challenge, but he tried to do a little bit too much out there and he didn’t play his best game,” said McFeeters.

The following night the Eagles travelled to Calgary to face the Canucks for the second time in a week, and once again were victorious, winning 5-2.

“Alex was much better in the game in Calgary,” added McFeeters. “He is is just like any other player on the team – he’s a piece of the puzzle, maybe a little bigger piece than others and I think he saw that in the game on Sunday night.”

Through the month of December, the Eagles penalty kill has been among the league’s best, a stat the team is proud of since struggling for a majority of the season on the penalty kill. Unfortunately the red hot power play has suffered, an area of the Eagles’ gameplay the team could rely on to win games, said McFeeters.

“We have seen a massive improvement on our penalty kill lately. It is something we have spent a lot of time on in practice. As a result that means we’ve spent less time on our power play, which has started to suffer. We really need to find a balance between our special teams,” said McFeeters.