Canmore’s Craig Wilson decimated Cole Kander of Red Deer in the K.O. For Cancer main event as the referee was forced to stop the fight in the second round, Saturday (Aug. 6).
Aug 11, 2011 12:00 AM By: Rocky Mountain Outlook 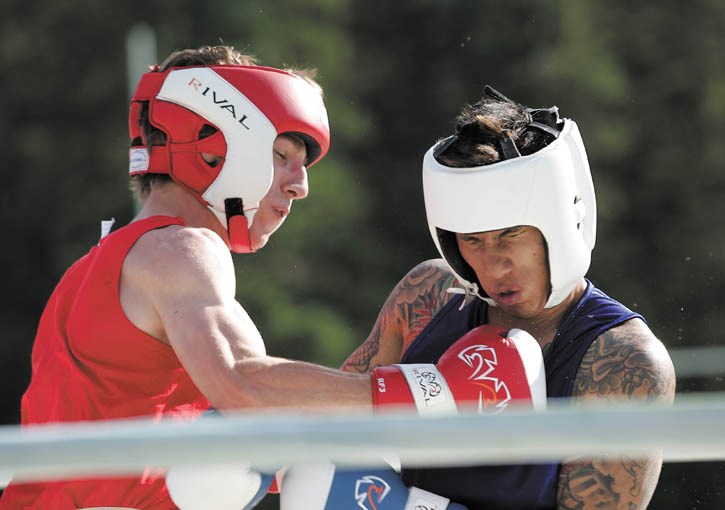 Canmore’s Craig Wilson decimated Cole Kander of Red Deer in the K.O. For Cancer main event as the referee was forced to stop the fight in the second round, Saturday (Aug. 6).

The headliner bout capped off a successful fundraiser by the Canmore Fight Club, which helped raise money for the Canmore Health Centre. Ten fighters squared off under the open skies in the Canmore Collegiate High School field.

Wilson hammered away on Kander with his right, scoring early and often. The hometown fighter knocked his opponent down in the first with a right hook and refused to relent in the second.

“It was a clean, lucky punch,” Wilson said. “That helped with the plan. I knew I was fit going in and that gave me the confidence to keep pushing.”

In the second, both fighters exchanged blows on the ropes until Wilson stopped his opponent with a solid right hand. Kander stumbled again, overmatched, and the referee cut the event short.

Wilson didn’t know he’d be fighting Kander until the day before, as his initial opponent withdrew due to food poisoning. Although he was facing an unknown opponent, Wilson didn’t take long to establish a rhythm. A classic inside fighter, Wilson broke through Kander’s defence with his jab and worked the right hand.

“Inside is where I like to be,” Wilson said, noting a jab and hard right one-two did the trick against his opponent.

Wilson hopes the bout was a good warm-up for upcoming provincial and bronze gloves tournaments.

“I’ll go back to the gym and see how it goes,” Wilson said.

The undercard featured an even match between locals Jeremy Kaliel and Curtis Finkbiner.

The bout was a re-match from last year’s K.O. For Cancer between Kaliel and the dangerous right hand of Finkbiner, however, this time the match was out of exhibition territory and into win/loss territory.

Finkbiner looked dominant early on, bloodying his opponent’s nose in the first round.

But partway through the second, Kaliel began throwing uppercuts and connecting with his right, working Finkbiner’s body.

The change proved successful, as Kaliel scored points with a steady diet of body blows.

Kaliel secured the win with a flurry in the third and won with a unanimous decision.

“He’s a great opponent and I knew he had a big right,” Kaliel said. “I came with the uppercut and straight right and that set up the flurry at the end.”

He credits training with Nick Martin and several of the younger fighters at the Canmore Fight Club for his fitness.

Fresh-faced Neal Greaney faced tattooed Jeremy Divina out of Red Deer. Opening jitters looked to shake Greaney early, as he nearly fell right out of the ring in the first 10 seconds after misjudging the size of the ring.

Devina quickly took Greaney’s jab away with an aggressive 30 second attack to start the match. The lanky Greaney had to change his strategy, and tried to get inside on the stocky Red Deer fighter. Divina underestimated the strength of his opponent and appeared content to take punches.

Once Greaney connected, Divina soon realized the error of his ways. Greaney worked the body with precision and ferocity

Shortly after, a right hook sent Divina tumbling to the mat.

In the second, Divina struggled with his fitness – and his head gear as Greaney landed several body blows.

A flurry forced the referee to stop the fight in the third round and Greaney was awarded victory.

This year’s event ran smoothly and Martin passed on credit to those who helped.

“I was real happy with everyone. Everyone fought well and I had some good hands helping to volunteer,” Martin said. “This event will be back.”