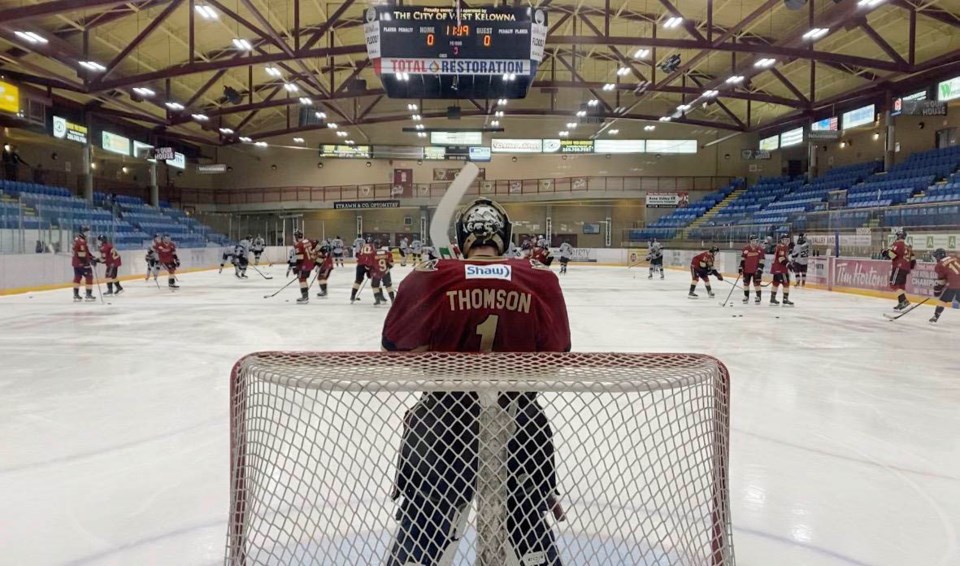 Jay Thomson of Canmore is playing in net this season with the West Kelowna Warriors of the BCHL. WEST KELOWNA WARRIORS SUBMITTED PHOTO

WEST KELOWNA – Jay Thomson is the first to acknowledge that his days of stopping hockey pucks in the Alberta Junior Hockey League (AJHL) won't be on any future highlight reel.

But as a new season approaches, the goalie from Canmore has a big chip on his shoulder and will look for redemption in a new province and with a new team after earning a spot on the West Kelowna Warriors of the British Columbia Hockey League (BCHL).

“I’ve had a couple tough bounces in my career, I’ve played some bad games that led to being in some not ideal situations, so coming over here I thought I got an opportunity here. I got a clean slate and I have nothing to lose,” said West Kelowna’s new 19-year-old goalie.

“I definitely like to prove people wrong who maybe counted me out. I think that’s what hopefully I’ve been doing this year.”

In the AJHL, The six-foot-one netminder played for the Drumheller Dragons, Olds Grizzlys and Calgary Canucks over two seasons from 2018-20. In 62 games, Thomson had a 5.02 goals against average and .869 save percentage.

His stint in the AJ unceremoniously ended with a “mutual parting of ways” with the Canucks earlier this year. However, Thomson is looking forward to his newfound chance to jumpstart a flat junior A career.

“I haven’t gotten so many wins if anyone’s been following my career,” Thomson said. “We have a really good team this year, so I’m looking forward to kind of being a part of a team that has aspirations and goals instead of guys who are just there to live the junior hockey lifestyle.”

He might have found it with the Warriors, where he'll be in a three goalie system throughout the season, competing for starts and minutes in the crease.

“Jay is a goaltender who is technically very sound and has an exceptional work ethic,” said Warriors head coach Simon Ferguson in a press release. “Jay has come to West Kelowna looking for an opportunity in camp and has earned a spot through his play.”

Ferguson is a former varsity coach for the defunct Banff Hockey Academy, which is where he met Thomson during the goalie’s days as a Bear in 2017-18.

Describing himself as a glue guy (brings the locker room together), Thomson wants to prove he's a goalie who will always give his team a chance to win. He's had limited minutes so far in the extending training camp due to some playing rights hiccups, but he’s been doing his homework on the teams, studying the speed and style of the BCHL.

“The BCHL is a higher skilled league,” said Thomson. "We have a lot of Americans who come up here that really push the skill of the league – and it’s fast, fast hockey. This league’s go, go, go and always moving.

“I think I have to adapt my game to be a little more fluid and mobile in the crease, but I definitely think I’m ready to play here.”

Thomson likens his playing style after Russian NHLers, with a “composed, but intense and technically sound” style in the crease.

The goal of most junior A players is to elevate their game to reach the next level. Thomson wants to make it to the NCAA, and in a season where he's glad to be given the opportunity to showcase his stuff, the road to a scholarship and his redemption, has already begun.