“Regardless of when the Games take place, I will go," said Canadian Olympic race walker Mathieu Bilodeau. "But I think I will have to change my mentality depending on when they happen. I would like to go and compete for performance, but I might have to go just for the Olympic experience.”
0
Mar 26, 2020 12:00 PM By: Evan Buhler 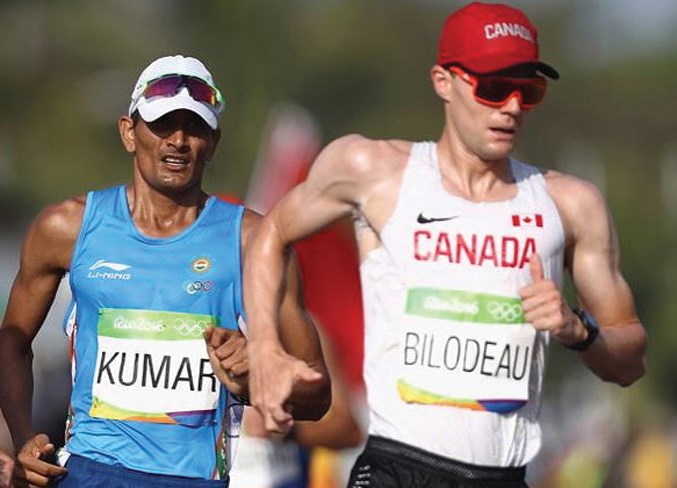 “I think it was a bold move by Team Canada," said Canadian Olympic race walker Mathieu Bilodeau, who resides in Canmore.

"I think in this case, they should have waited to discuss it with other nations,”

He added the IOC was prepared to take four weeks to assess the likelyhood of the Games going ahead, and that the Canadian Olympic Committee's (COC) decision should have been made then.

“It is the best decision for sure [not to send athletes]. I still feel Team Canada should have waited, but that’s just my opinion as an athlete who still wants to compete,” said Bilodeau who had qualified for the 2020 Games, which would have been his second Olympic Games.

Canmore cyclist and Olympic hopeful Sara Poidevin did not make the Cycling Canada shortlist for the Games, so her racing and training was not directly affected by the postponement.

“Although it's an emotional time for those who have devoted so much time and energy toward their preparation, the athletes I have heard from all have a level-headed perspective on the situation and are committed to upholding the Olympic message of showcasing the best of humanity by postponing the Games,” said the 23-year-old cyclist in an email.

On Tuesday (March 24), the COC and Canadian Paralympic Committee (CPC) released a statement in respose to the IOC's decision.

"With this postponement, the IOC has given Tokyo hopefuls worldwide the clarity they need about the immediate future, so we can all concentrate on our collective health and wellbeing and take all necessary steps to mitigate the spread of COVID-19," read the statement.

Over the past year, Bilodeau was able to take time off work to train full time and that preparation has come to a grinding halt, adding that he made trips to California and the B.C. coast in the winter months to train.

This past week, Bilodeau’s training has been limited to stretching in his home as he has had to self-isolate. On March 12, he arrived in France for a race that was supposed to take place on Sunday (March 23).

“I wasn’t sure if they would cancel the race or not, so I decided to go, and after not even 20 hours there, it was cancelled and I booked a flight back home. Now I am in quarantine.”

For the safety of the athletes and all those involved in the Games, and based on the current circumstances the IOC and Japanese government have decided the Games must be rescheduled after 2020 and not beyond summer 2021.

With many unanswered questions and the uncertainty of when the games will happen, Bilodeau said he feels uneasy about his future as an Olympic race walker.

“Now with the uncertainty it’s pretty tough to train, so I am going to have to figure something out,” he said.

“Regardless of when the Games take place, I will go. But I think I will have to change my mentality depending on when they happen. I would like to go and compete for performance, but I might have to go just for the Olympic experience.”