Canmore cycling star Sara Poidevin, one of the country’s finest riders, is representing the Great White North at an upcoming road world championship in Italy
Sep 10, 2020 4:00 PM By: Jordan Small 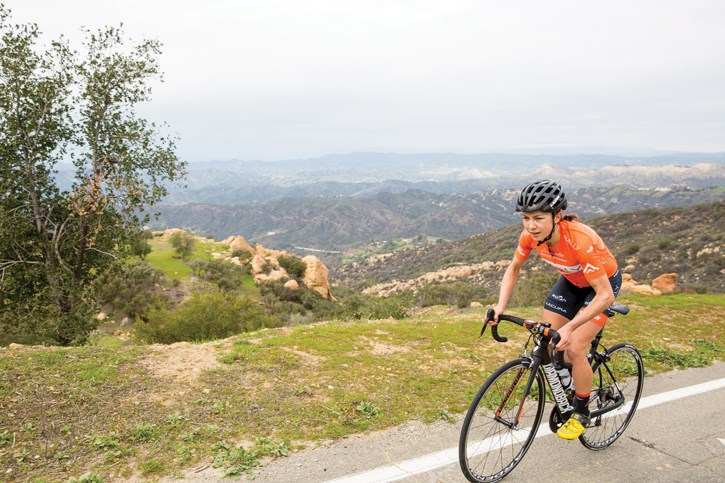 Cycling Canada selected Poidevin as one of 10 road athletes going to Italy for the 2020 UCI Road World Championships from Sept. 24-27.

“I'm really happy to have been selected to the team alongside a roster of super strong athletes, and I'm really looking forward to racing,” said Poidevin in an interview with the Outlook.

“All the details about the race have just come together in the past week, so all of our team plans are just starting to be made.”

“We've consistently had strong Canadian performances in the past few years, and this year, I think we have a really strong and well-rounded team that will be key in helping us have a successful race,” Poidevin said.

Earlier this summer, the 24-year-old rider was selected as a non-travelling alternate for the Summer Olympics Games in Tokyo, rescheduled for 2021.

Riding local streets in a distinct orange jersey, Poidevin has left a mark on Canmore’s pavement over her life. She's been grinding away in town amid the pandemic. However, Poidevin was already in Europe riding when she was selected as part of a competition program with UCI-registered trade teams.

The upcoming championships will be held in Imola, a city within Bologna, and raced on a 144-kilometre road. The races were originally scheduled for Aigle-Marigny, in Switzerland, prior to the pandemic. Only road and time trail events for Elite men and women are being raced this year.

“The route is going to be slightly easier than what was originally scheduled, but I have a good chance of doing well,” said Woods, a 2018 World's bronze medallist in a statement.

“I think this course will play out a lot more like what we’d expect at the GP Quebec and Montreal and I think it’s going to be super challenging. Representing Canada is always a great source for pride for me, particularly in this crazy season wearing the maple leaf at the world championships is an honour.”