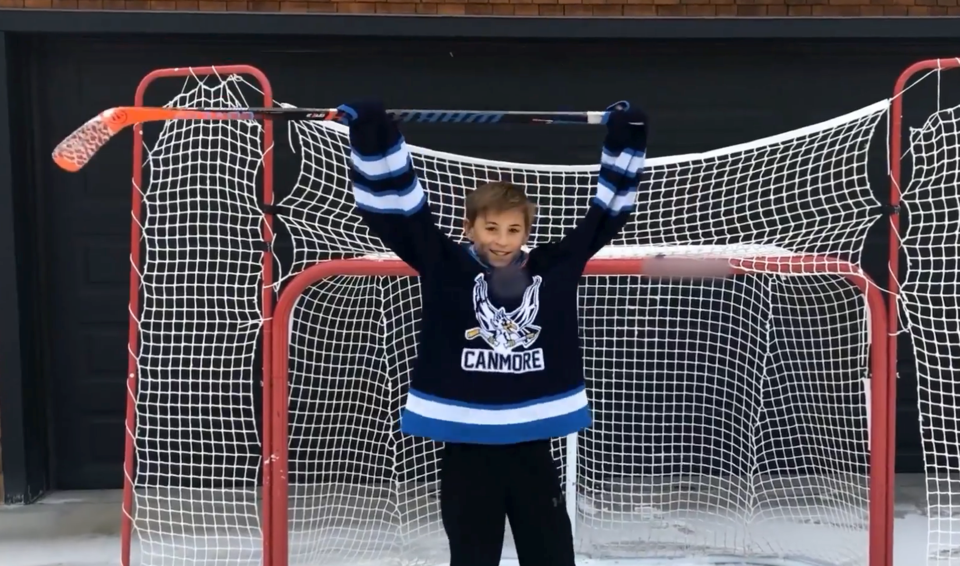 Jackson Froese of the U13 Canmore Eagles during a clip in their Good Deeds Cup video. SCREENSHOT

CANMORE – The U13 A Canmore Eagles finished in the top-three during this year’s Chevrolet Good Deeds Cup.

Announced on Hockey Night in Canada Saturday (March 20), the local minor hockey team won $5,000 for being runner-ups, which will go toward supporting Rocky Mountain Adaptive (RMA), which removes barriers in sport and recreation for those living with physical and cognitive disabilities.

What a season! This year’s Good Deeds Cup champ is @AdmiralsU13C2.
Their heart won over Canada and their brilliant pitch won them the cup.

Show some love in the comments below. #GoodDeedsCup #Champions pic.twitter.com/BEFIGNPHRH

Finishing in first was the Victoria Admirals. The other top three finalist was the Cape Breton County Islanders.

Named as one of 11 national finalists in the 2021 Good Deeds Cup, the U13 A Eagles were the first local team to be named a finalist over the five-year existence of the Good Deeds Cup. The program asks minor hockey teams across Canada to pitch a 30 second to one-minute video of a good deed Idea that will positively affect their communities.

The little Eagles’ community-based video was on supporting RMA.

With over 20 sports and recreational activities available across the Bow Valley year-round with specialized equipment and programming, RMA’s internationally recognized brand provides up to 2,000 adaptive experiences annually during its multi-week or specialized sessions.

Many across the province poured in support for the U13 A Eagles and its bid to win by helping get the word out including the Calgary Flames, along with stars Mark Giordano and Johnny Gaudreau.

.@CanmoreA are #GoodDeedsCup finalists! #CofRed, make sure you vote for them every day until Feb. 24th - if they win, they're donating to @RockyMtnAdaptiv, which enables individuals with disabilities to enjoy sporting activities in the Bow Valley!