Beneath an oppressive African sun, cyclists drip with sweat as they navigate dust-choked roads into the remote recesses of deepest Sierra Leone.
Feb 23, 2012 12:00 AM By: Rocky Mountain Outlook 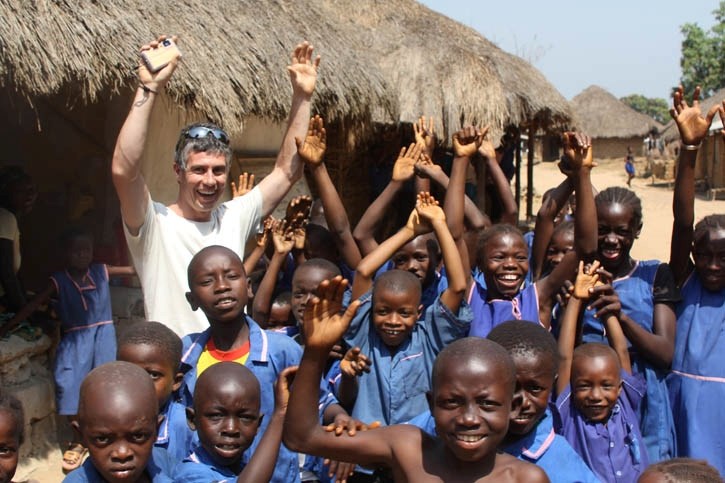 Alistair Darichuk is greeted by several schoolchildren in Sierra Leone. He and several Bicycle Cafe employees took part in a 600 km Cause Canada expedition across the country.

Beneath an oppressive African sun, cyclists drip with sweat as they navigate dust-choked roads into the remote recesses of deepest Sierra Leone.

The thermostat reaches 38 C on 120-kilometre riding days, which proves a difficult adjustment for six Canadians exploring the rising landscape.

Upon arrival in the agrarian villages, punctuated by mud brick houses and thatched roofs, children rush to greet them, shouting the Krio word for white man upon approach, smiles all around.

“We saw poverty, but not unhappiness,” said Brian Cooke, owner of Bicycle Café in Canmore. “No matter where we were, children would run to greet you.”

Cooke assembled a team from the Bicycle Café, bringing along Jay Balabas, Alistair Darichuk and Cheryl Beattie, to join CAUSE Canada’s Paul Carrick on a 600 km cycling trip through the nation. After many conversations with Carrick, Cooke said he felt compelled to help fund many programs in Sierra Leone, such as micro-finance, building schools and birthing huts. Many of CAUSE’s programs focus on empowering women and children, and the cyclists got a first-hand look at their work.

“We decided to help raise funds for charity in a bike-related way,” Cooke said.

Obviously, riding in Sierra Leone is different than Canadian tours. Meals often consisted of rice topped with a palm oil concoction or peanut soup, while most families could only afford to eat once or twice a day. That made 120 km days up 3,500-metre climbs particularly tough.

However, it was the people that touched the riders the most.

“Some people don’t even have a starting chance. No health care, proper nutrition or school. I felt compelled to help,” Cooke said.

Sierra Leone is one of the poorest nations on the planet. Recovering from a decade of civil war that ended in 2002, the nation is scarred by the blood diamond trade. Men have few options and women even fewer. CAUSE Canada has operated in the nation for 24 years, and was happy to partner with the Bicycle Café team and raise funds and awareness about the program.

“We showed them all of our work in Africa,” said Carrick, president of CAUSE Canada. “They talked to nurses in Sierra Leone, midwives, children through the CAUSE kids program, teachers and handicapped children. They witnessed field workers lent money through the microcredit program, helping them buy extra goods. It costs $3,000 to build a birthing hut. You need money to employ a midwife, monitor blood pressure. The trip will help us build and run three birthing huts.”

On top of the aid work, they did catch a glimpse of Africa’s wild side. By no means comparable to the lush and diverse landscape of the Savannah, baboons and reptiles were visible on the journey. Cooke, accustomed to scanning single-track trails for bears, got a start when a seven-foot black snake slithered across the road in front of him. He later learned it was likely a cobra.

The journey was a new experience for Carrick as well, who cycled about 400 of the 600 km over two weeks.

“Everything I did, I did on a motorcycle before,” said Carrick, who had less trouble with the heat. “They’re all tremendous riders. The Café guys were challenged by the food and heat, and the levels of cleanliness is not the same.”

After paying their airfare and in-country expenses, the team donated their bicycles to CAUSE Canada workers in Sierra Leone. Thus far, they have raised $10,000 and plan to raise another $10,000 raising money at various cycling functions and races.

Cooke said the trip opened his eyes to the frivolities many in the West take for granted, and that he’s very thankful for everything he has now.

They attracted national attention and were interviewed by the national press upon arrival in Freetown. To donate, visit www.cause.ca