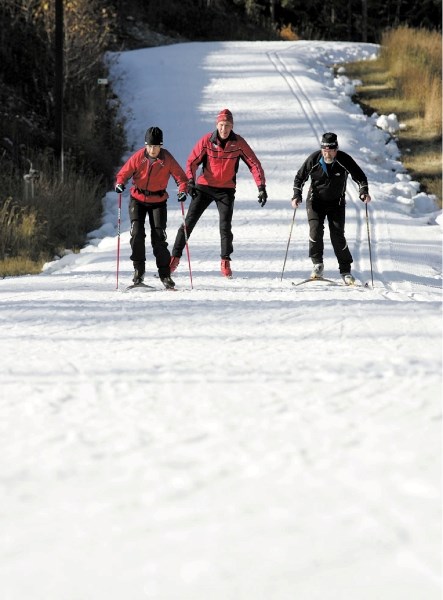 Judy Buchanan-Mappin, Dave Rees and Mike Mappin enjoy getting back on skis as they take to the Canmore Nordic Centre’s Frozen Thunder ski loop Saturday (Oct. 15). The trail was enabled by burying snow at the end of last ski season.

Ivan Babikov has never unleashed a Brian Johnson-calibre primal scream, toque-knitting Perianne Jones has never rocked as hard as Malcolm Young and despite the tendency to play air guitar on his skis after winning world championships, Devon Kershaw is no match for the duck-walking Angus Young.

Yet with the world cup season less than a month away, with the help of their new two-kilometre snow track, the Canadian skiers’ goal is clear: leave the competition thunderstruck.

Perched atop ‘Frozen Thunder,’ the only snow track on the continent at this time, the national team was introduced on Oct. 17. Deemed one of the strongest teams in Canadian history, the consensus is this group should contend for top spot on the globe. Having two weeks to train at home on snow only helps their cause, the athletes said, as they prepare to challenge the world.

“Only one other place in the world saves snow and that’s in northern Finland, and believe me you don’t want to go there. It makes this place that much more special,” said national team head coach Justin Wadsworth. He believes everyone on the senior team this year will contend for medals, and expects to see all of his senior team athletes, Chandra Crawford, Dasha Gaiazova, Jones, Kershaw, Babikov, Alex Harvey and Lenny Valjas, on the podium at some point this year.

High performance director Tom Holland said this spring, Kershaw walked into his office and said he wants the team to be the best on the planet.

“Now the steps going forward are huge and our goal is to win the overall world cup,” Holland said. “Our athletes and our whole staff have to step it up.”

“Having this training is critical, especially with races coming up in late November. It allows them to compete with Europeans that are doing the same thing on glaciers,” Roycroft said.

“It’s amazing we have this opportunity right at our back door. To store (snow) from last year is incredible. Our athletes skied for the first time on it yesterday and said it’s great, it’s a definite advantage,” Wadsworth said.

The Nordic centre spent $20,000 to create the track, which involved saving 18,000 cubic feet under a pile of sawdust over the summer months. After some melting, they were left with 11,000 cubic feet of snow – enough for two kilometres of track. Roycroft said half of the fees are covered by additional trail fee revenue, while they’re looking for sponsorship dollars to pay for an even longer track next season.

Several other teams from Alberta, British Columbia and the United States have already booked week-long training blocks on Frozen Thunder.

Gaiazova, who was training with U.S. skiers last week, said they couldn’t believe she would be on snow so early in the year.

“This is a fabulous opportunity to train on the snow. It’s thick, it’s wide. Were able to do all of our key workouts here. It’s the best skiing in North America.”

This year’s course is a vast improvement over last year’s track, and should last until the natural snow falls.

“They’ve incorporated good terrain: downhills, uphills and some technical stuff. They’ve got it nailed down to what the elite racers need,” Gaiazova said.

“It’s an amazing asset for us. Every year the Nordic centre is amazing for us. Frozen Thunder was almost a kilometre last year, this year Ivan measured it this morning and it’s 1.95 km. Every year it’s getting better and better. Not many teams at all have this so close to home,” Kershaw said.

The unofficial captain of the team won’t get to spend much time in Canada this upcoming season, so he’s appreciative of the course.

“It allows us to stay close to home. I spend 5.5 months on the road in the winter. Any time I can spend time at home makes a difference,” Kershaw said. “This year, my mom came out for Thanksgiving. I think I had a week of Thanksgiving dinners.”

As for the skiing, he’s confident the team will have a strong year.

“As a skier, you always question if you did enough. I’m confident this season we’ll have great results. It’s not a sport like running where if you push to the watts, you’ll be competitive. In cross-country, the conditions are always different, the course is always different. But the team has had great work.

“Last year was a banner year and I feel proud and privileged to have been part of that. To do something in the sport’s rich history is pretty special. It’ll be tough to top that, but there are a lot of races,” Kershaw said.

He is not prepared to rest on his laurels.

“We have to keep getting better and better. It’s one thing to get to the top. It’s infinitely harder to stay there.”

The skiers will get a chance to test their racing legs Thursday (Oct. 27) as the national team has a sprint race planned. Wadsworth doesn’t like to hold races over the summer, however, he said now is the time for the racers to get into that mindset.

“That will be cool to see who’s ready to go. We want people to think about racing… We will invite other athletes, like the top juniors. It will be a real race,” Wadsworth said.

The senior development team has several fresh faces, including Jesse Cockney, Graeme Killick and Kevin Sandau. They’ll battle Drew Goldsack, Brent McMurtry and Graham Nishikawa for a chance to represent Canada in Europe on the men’s side, as well as Frederic Touchette and Michael Somppi. Alysson Marshall and Emily Nishikawa were named to the women’s senior development team.