“You can’t teach scoring … that’s something that at a young age just comes with confidence. We’ve just got to get these guys looking at the net more confidently."
0
Nov 1, 2019 2:00 PM By: Evan Buhler 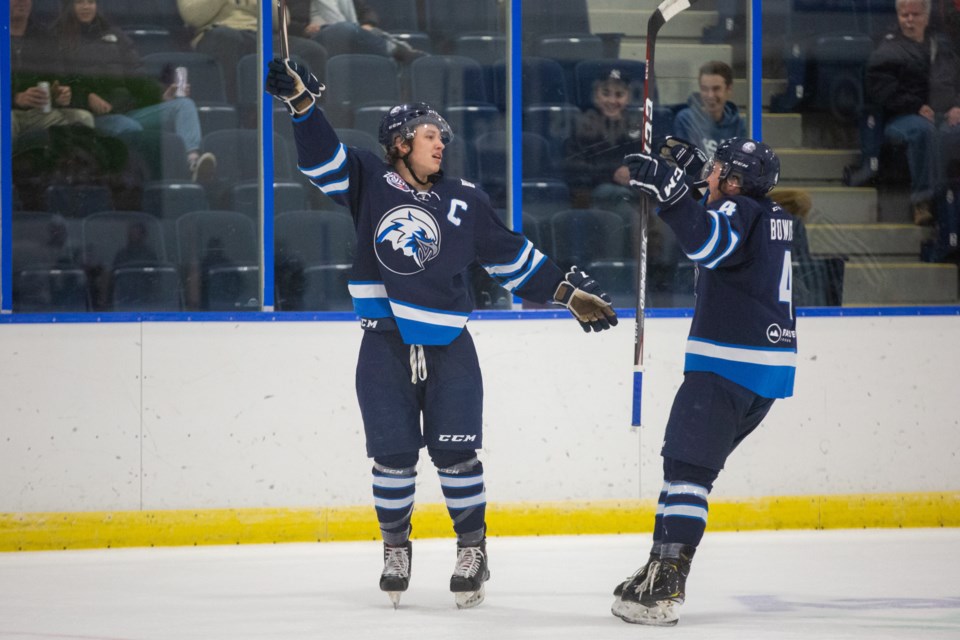 Canmore Eagles captain Tian Rask celebrates his first goal of the game with teammate Jared Bowman during a game against the Brooks Bandits at the Canmore Recreation Centre on Tuesday (Oct. 29). Evan Buhler RMO PHOTO

CANMORE – The goals will come.

That's what the Canmore Eagles AJHL team is telling itself after a disappointing start to the season so far.

“Right now we’re not seeing things as big as we could be, I mean obviously our secondary scoring isn’t there,” said Eagles head coach Andrew Milne.

Eagles captain Tian Rask said his side will start to contribute more.

“Confidence is a huge thing. Once you get one, it’s like a monkey off the back and then they will start to come in bunches,” Rask said.

Rask has been on his own scoring slump recently, but was able to snap it, and scored twice in the game against Brooks on Tuesday (Oct. 29) evening.

“You can’t teach scoring … that’s something that at a young age just comes with confidence," said Milne. "We’ve just got to get these guys looking at the net more confidently.

“Lyno [Connor Lyons] and Alex [Young] are seeing a lot of mesh right now and everyone else really isn’t seeing anything."

The Eagle’s leading scorers, Young and Lyons, continue to roll. Both players are currently sitting on seven game point streaks. Last season, Young was fourth in league scoring with 74 points. This year, at his current pace Young is on pace to hit triple digits.

Through 17 games this campaign, Lyons is also playing above his point per game numbers from last year. The Lethbridge-raised Lyons is on pace to hit the 90 point mark this year.

“Alex and Connor are scoring a lot and we don’t want to have that constant pressure on them to keep on scoring," said Kazu Prevost. "I think in the room there are definitely guys thinking too much about it but we all just want to contribute. We all want to score goals."

Between the two veteran forwards, Lyons and Young have scored 47 per cent of the Eagles 59 goals this season.

Since the Eagles five game home stand started on Wednesday (Oct. 23) against Drumheller, the team’s secondary scoring has started to make an appearance, but is still not at the level Milne would like to see. Four players other than Lyons and Young found the net over the past three games.

The only Bow Valley native on the Eagle’s roster, Prevost scored his first of the season last Friday (Oct.25) in the Eagles 6-1 victory over the Calgary Canucks.

“It was a big weight off my shoulders, I’ve been looking for that one for a while,” said Prevost of his first goal of the season.

One player that has continued to struggle to find goals this year is Max Giangualano. Giangualano has not scored since Oct. 6 in a 6-4 victory over the Grand Prairie Storm. In 13 appearances this season, the Eagle’s veteran only has two goals and four assists.

“I’ve been trying to get back to the player I was last year. I was injured for a little bit, so I think that got me off my game a bit,” said Giangualano.

Last year the Calgary-native scored 26 goals in 54 games and averaged 0.8 points per game. This season, Giangualano is only averaging a point every other game.

“He’s better than his numbers are saying right now," Milne said. "Max is going to score goals and when he starts scoring they will come in bunches."

Milne said he is confident his side is starting to find their groove.

“Even though our secondary scoring isn't quite there, we’re getting more confidence with our guys every game, and I thought our last four games have been our best games. With that confidence the goals will come.”