Willy Sakal scored the shootout winner and Steve Papciak stopped all 10 shots he faced as the Canmore Eagles downed the Drumheller Dragons 3-2 in a shootout in AJHL action at Alex Kaleta Arena, Saturday, Jan 15.
0
Jan 20, 2011 12:00 AM By: Rocky Mountain Outlook 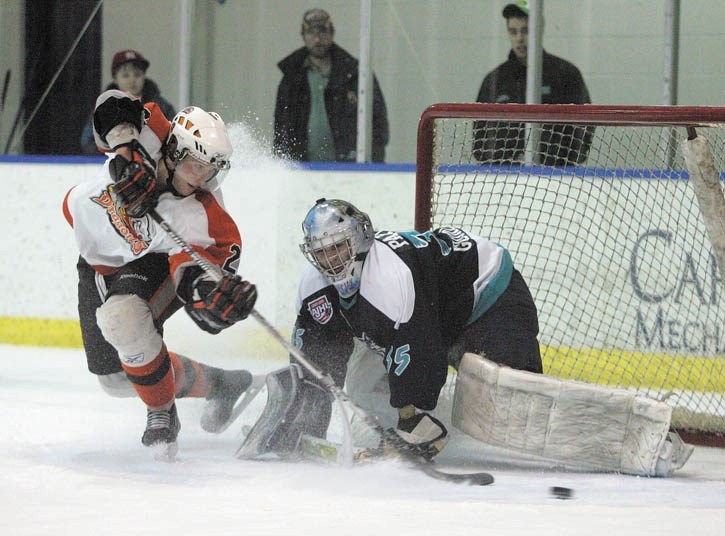 Willy Sakal scored the shootout winner and Steve Papciak stopped all 10 shots he faced as the Canmore Eagles downed the Drumheller Dragons 3-2 in a shootout in AJHL action at Alex Kaleta Arena, Saturday, Jan 15.

The win is the first of 2011 for the Eagles, who snapped a five-game losing streak.

The home squad carried most of the play, but didn’t capitalize on their chances late in regulation.

“We had our chances, but we couldn’t bury them. But I’m excited for the guys. We needed this win,” said Andrew Milne, Eagles’ coach and general manager.

The Eagles played a strong forechecking game throughout and finally got the breaks needed for a win. However, the team lacked finish around the net.

“We dominated the play tonight, but we didn’t jump on rebounds. We missed Ben Bitz tonight, who in a game like this may have potted a couple,” Milne said.

Bitz broke his wrist Friday during the team’s 3-1 loss to Okotoks.

Battling through a physical second period, the Dragons tied it up in the second. Four minutes later, however, Roy scored his first of the game on the powerplay, with Cartier and newly acquired Mitch Kauffman assisting.

The Eagles had a glorious chance to bury the game in the final minutes of the third, as the squad broke in on a three-on-two. However, Dragons goalie Cole Cheveldave made the stop, Drumheller gobbled up the rebound and took it down the ice to knot the game 2-2.

The Eagles dominated puck possession in overtime, with Roy and Sakal each getting chances. But Cheveldave was equal to the challenge, until Sakal, the Eagles ninth shooter, beat him with a nifty deke in the shootout.

“He’s quick, so I tried to get the goalie moving and open up a hole,” Sakal said. “I’m relieved. It’s good to crack this losing streak.”

The Eagles new-look defence was strong in front of Steve Papciak, who applauded their efforts after the game. Kauffman and Josh Martin added poise, leadership and experience to the Eagles’ back end.

“Our two new defencemen helped so much,” Papciak said. “It’s easier to play with two experienced guys to rely on.”

The win was a big psychological victory for the club, which had gone more than a month since posting its last win.

“I was determined not to lose. Our last win was in December,” Papciak said.

Sniper Brian Doust returned to action after shattering his kneecap last month, showing little sign of slowing down. The winger failed to record a point, but was a physical presence, even dropping the gloves in the second period.

On the injury front, the Eagles hope to get captain Tyler Horton back within a week, while Chris Stachiw is still two weeks away. The injury to Bitz is still being assessed.

“The day they cut Horton’s cast off, they put one on Bitz,” Milne said.