The nightmare is over. A 3-1 loss to the Calgary Canucks Friday (Feb. 17) night officially ended the most tumultuous season in Canmore Eagles history and perhaps one of the most difficult in the AJHL.
Feb 23, 2012 12:00 AM By: Rocky Mountain Outlook 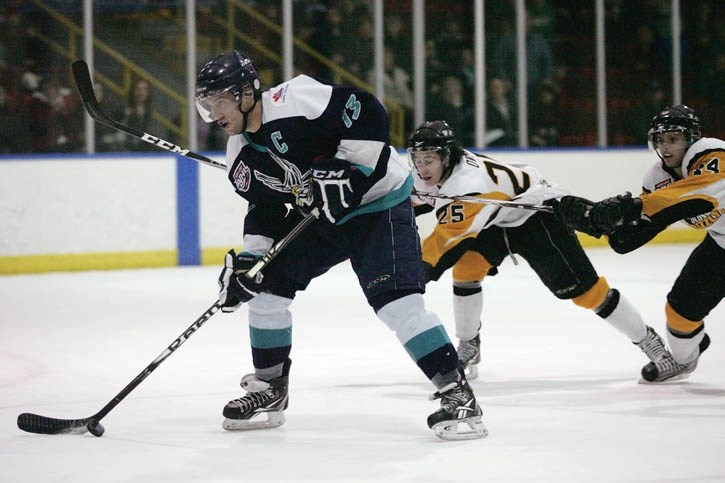 Davis Claffey breaks in alone in overtime against the Drumheller Dragons. He scored, but it wasn’t enough to keep the team alive as they missed the playoffs for the first time since 1996.

The nightmare is over.

A 3-1 loss to the Calgary Canucks Friday (Feb. 17) night officially ended the most tumultuous season in Canmore Eagles history and perhaps one of the most difficult in the AJHL.

It was a season which began with talk of the team being sold; then morphed into a brutal 20 game start before tragedy struck when forward Patrick Steel was sent home from practise, never to return, as he passed away suddenly.

The team survived the blackest night, as boys were called upon to be men in the following days. A stronger team emerged, powered by six local players, a scrappy winger and captain who became a force on and off the ice.

However, injuries meant the team had as many as 11 rookies in the lineup, and the inexperience cost them too many wins. A late charge punctuated by a shootout win over Drumheller and overtime victory over Olds wasn’t enough to overcome an abysmal January, where the team only collected three points.

“We went through a lot of adversity, too much to name and it came down to the final period. We deserved a better fate,” said head coach Andrew Milne.

“It’s been the most difficult year of my career in Canmore,” said captain Davis Claffey. “I thought we showed a lot of maturity and it will show as the club moves forward.”

The final game of the season appeared to be proof fate was against them on Friday night.

The Canucks grabbed an early 1-0 lead, but went up 2-0 with six seconds left in the first period when a Canucks clearing play turned into a late goal.

The Eagles pressed in the second and Connor Hoekstra squeezed a bad angle shot passed the Canucks goalie to energize the capacity crowd. A shortened bench came in waves against the Canucks, as several Eagles brought their best to the table.

Riley Point skated miles, Steven Phee was relentless on the forecheck and Luke Philp struck fear into the Canucks defence every time he touched the puck.

In the third period, the Eagles appeared to tie it up when Luke Philp found open ice and flipped the puck over the Calgary goalie and into the net. However, the referee immediately waived the goal off, ruling that Point was in the crease. Even though Point was not interfering with the goalie, the rarely-called infraction stood. Calgary added an empty netter, and the season was over.

“We needed to beat a hot goaltender and a referee that night,” Milne said.

It’s the first time the Eagles have missed the playoffs since 1996 in a league where almost everyone makes the playoffs, however, head coach/general manager Milne said the season did have many positives.

“A lot of the positives are how hard we competed and the experience we gained. Braeden Music really came into his own and Keegan Thompson was a warrior in those last few games,” Milne said.

“I think we battled really hard. I look at the last three games we had to win and that was playoff hockey.”

The Eagles survived the final month with several of their best players playing hurt. Simon Philp came back earlier than perhaps he should have, while Luke Simpson was visibly hobbled by a bad knee for the second half of the season. John Stevens broke his wrist and Ciaron Driscoll broke his collarbone.

However, that doesn’t remove the sting of missing the playoffs.

“We’re not happy we didn’t make it. We had some games where we should have capitalized. We don’t want to dwell on points we lost, but there were a lot of them,” Milne said. “But at the end of the day I’m proud of the character they showed.”

The game was the final AJHL match for Claffey, Justin Krabben and Mitch Kaufmann. All three are mulling over school offers, however, Claffey is also pondering a move to Europe to play hockey.

Claffey spent four years playing for the Eagles and said the personalities are what he’ll remember the most.

“I’ll definitely remember the players. I’ve never had so much fun in my life. The coaching staff is incredible and we get a lot of support from the community,” Claffey said.

Following the team banquet, talk was of the future, as Milne expects big things from his lineup. Most of the forwards should return, however, there’s a good chance Luke Philp could stick with the WHL next year, and Cam Barnes proved down the stretch he’s capable of being a number one goaltender.

“Phee has come into his game and Point is playing the best hockey of his life. Hoekstra, Simpson, Margeson all improved. Thompson is set to have a good year, as is Cam Barnes. Overall, I’m really satisfied with our development,” Milne said.

The Eagles also handed out team awards on Saturday (Feb. 18) at Silvertip. Luke Philp won the top scorer and rookie of the year award. Claffey won the Player’s award, Point took home the most dedicated player award as well as the MVP award.

Krabben was chosen as top defenceman. Academic awards went to Jeremy Gordon and Cam Barnes, while Alex Barnes was voted most improved. Driscoll took home the most sportsmanlike award. Hoekstra and Kaufmann won the Canmore Minor Hockey award. Pat Semeniuk was given the Ken Pauls award for outstanding contribution and Matt Strickland was named volunteer of the year.