The Eagles' will look to recover from a grueling road trip as the trade deadline looms
0
Jan 8, 2020 2:00 PM By: Evan Buhler 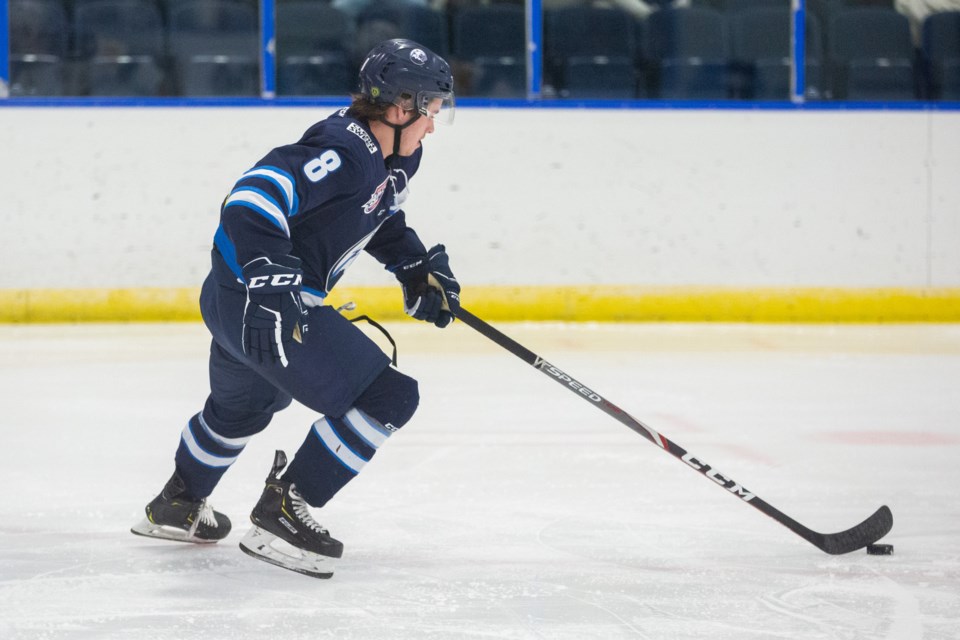 The Eagles Drae Gardiner carries the puck out of the defensive zone during a game against Spruce Grove at the Canmore Recreation Centre. RMO FILE PHOTO⁠

CANMORE – Following back-to-back 8-2 losses to the Brooks Bandits to close out 2019, the Eagles kicked off the new decade with a 4-1 road win against Fort MacMurray Oil Barrons last Friday (Dec. 3).

In the first game of 2020, the Eagles’ started 17-year-old affiliate goaltender Andreai Proctor-Ramirez. The Lloydminster-native, fresh from playing at the Mac’s AAA Midget Tournament in Calgary, turned away 28 of the 29 shots he faced against the Oil Barrons in his fifth AJHL appearance and first start for the Eagles.

“He probably could have played here this year after a great training camp. He went back to midget [St Albert Raiders AAA] this year and has had a stellar career so far, so we felt he had earned an opportunity to play,” said Eagles’ head coach and general manager Andrew Milne. “When he played in Fort Mac he got the win, so we gave him a chance to play in Sherwood Park and he has proven that he belongs to play here at this level.”

To close out their road trip the Eagles faced the daunting task of visiting the two top teams in the North, the Spruce Grove Saints and the division-leading Sherwood Park Crusaders.

Despite a 4-1 loss to the Saints and a 6-1 loss to the Crusaders, Milne was pleased with the effort his side put in on the three game trip.

“Contrary to the results, I thought our guys played real hard. It was a difficult task with the travel and then obviously with the opponents. We were significantly handcuffed there with a few things that were out of our control,” said Milne about the depleted defence and health of the team. “I though that the guys that were able to play were warriors and battled really hard.”

Defenceman, Carter Coles did not make the trip with the team and will remain sidelined with an upper body injury for the immediate future. Although Drae Gardiner travelled with the team, he did not play due to an injury he suffered on Dec. 30. Dylan Witzke was the third defensive casualty, and was unable to play due to sustaining a puck to his face.

Gardiner did return to practice with the team on Tuesday (Jan. 7) and Milne said he and Witzke will be ready to go for the weekend.

This is an important week in the AJHL as the trade deadline closes on Friday (Jan. 10) and Milne is looking to improve the team as they head into the final stretch of the regular season.

“We want to make our hockey club better however we have to do it, so we’re open to communication from other teams on what that may look like in terms of a trade and so if something comes up we’re going to jump on it.”