Eagles need to remain strong in face of adversity

“We need to become comfortable when facing adversity, and learn how to handle these situations, and really just remain calm."
0
Nov 7, 2019 2:00 PM By: Evan Buhler 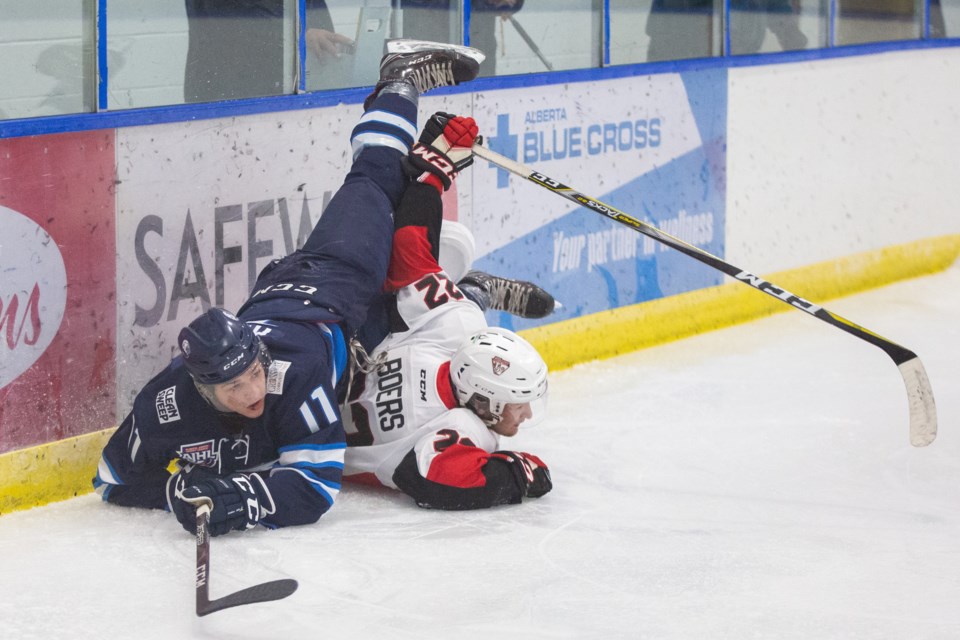 The Canmore Eagles Tayler Miller falls over top of the Camrose Kodiaks Erik Boers after being checked during a game at the Canmore Recreation Centre on Friday (Nov. 1). Evan Buhler RMO PHOTO

CANMORE – The Eagles may have survived one third-period scare against Camrose in last weekend's double header, but the team could not hold off a second challenge.

“Again, it was an immature third period that cost us,” said Eagles head coach Andrew Milne of last Saturday’s (Nov. 2) game against Camrose. “We lost our composure after we gave up an early goal and then we panicked.”

In Saturday’s contest, much like the game on Friday (Nov. 1), the Eagles opened up a three-goal lead on the visiting Kodiaks. The third period belonged to Camrose, as their offence exploded for six goals in just under 12 minutes of the final frame.

“We need to become comfortable when facing adversity, and learn how to handle these situations, and really just remain calm. That comes down to being stronger mentally and learning from more experience.”

Inconsistency has been a thorn in the side of the Eagles throughout the team’s campaign this season. Only once this season so far has Canmore strung together more than a single victory – a pair of wins against Grand Prairie and Olds. Twice this season the team has gone on three game skids, its longest loosing streak. Over the past five games Canmore has three losses and two wins.

Milne admitted consistency has been a worrisome issue this season.

“I think a lack of experience is one of the main reasons for the way our season has been so far.”

With eight rookies in the lineup, Milne said his veteran players need to provide more of a leadership role. While guys like Connor Lyons and Alex Young lead the team in their actions and points, Milne is urging his team to become stronger mentally.

“I know the guys are committed to our goals, but in order to be the team we want to be, we have to become stronger mentally. We need to be smarter, more confident and more mature in order to win games.”

Saturday's against Camrose was the sixth time this season the Eagles lost after holding a lead.

“We will take it with a grain of salt, and try to move on… we have the will in the room to bounce back,” said second-year player, Zach Carlson.

The Eagles will hit the road on a four game road trip starting in Lloydminster on Friday (Nov. 8).