“We’re really in an education and awareness phase, so people know that there’s an industry hurting and that we need help and we also want to have a seat at the table to understand how we’re getting back to play, how we’re getting Canadians back to events."
Sep 24, 2020 11:00 AM By: Jordan Small 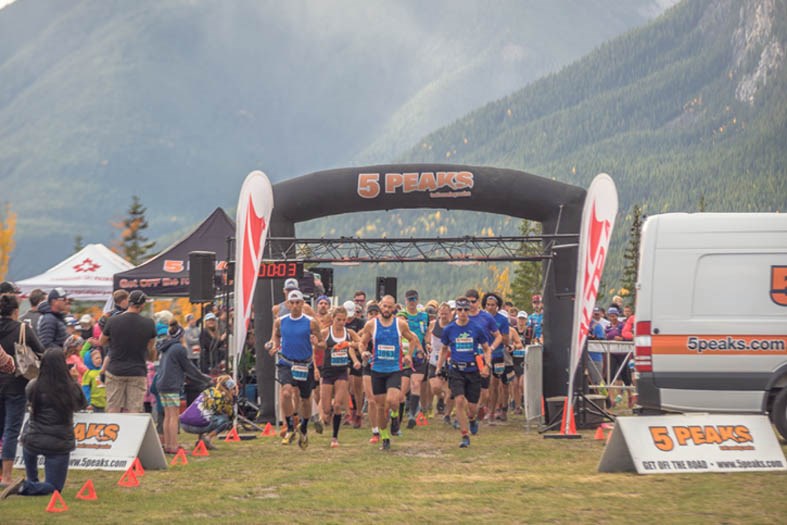 Runners take off during a 5 Peaks marathon in 2016 at the Canmore Nordic Centre. Endurance sports event organizers, like 5 Peaks, are speaking out about the future of the industry due to COVID-19 restrictions. RMO FILE PHOTO

BOW VALLEY – Organizers of endurance sports are starting to sweat over what’s going to happen in 2021.

COVID-19 has caused a massive disruption for sports around the global, and many endurance sports such as triathlons are at risk of ceasing operations without having some sort of life preserver, which the Canadian Endurance Sports Alliance (CESA) is trying to avoid this dim outcome by "fighting for the industry.”

“We wanted to build awareness about the problems we’re having in this industry, which is essentially we were the first to close down and we’ll be the last to come back – and really, there’s no end in sight,” said Kirstin Fleming, executive director of Run Calgary and interim board member of CESA.

“The endurance sports industry is unlikely to be back in 2021, at least in any real capacity, so we’re at a position now where it’s becoming dire for most operators.”

Created in the wake of the pandemic, CESA is lobbying to the federal government with a unified voice in an effort to keep businesses afloat.

Fleming said CESA is trying to figure out how to keep the industry viable due to its vitality to the Canadian economy, charities, and mental and physical health.

“From a financial perspective, we don’t know what that looks like, but we know that we’re going to need help to survive,” Fleming said.

She added that up to 65 per cent of the industry could either shut down, or close temporarily, without financial assistance in 2021.

Over 150 members have joined the alliance since its inception, including local organizers of 5 Peak Adventures and Banff Marathon Inc. With a combined total, CESA members’ events have about two million racers sign up per year.

The Bow Valley is a huge destination for endurance sports enthusists coming for the Banff Marathon, Melissa’s Road Race, Grizzly Mountain Events, 5 Peaks, and the TransRockies Race series, among others.

Grizzly Mountain Events organizer Tony Smith said previously to the Outlook it will be hard to financially stay afloat during winter after COVID-19 devastated the in-person aspect. For other local organizers, next year is a looming dark cloud.

“We’re kind of getting worried about 2021 now,” said Kevin McDonald, race director for 5 Peaks Adventures and Canmore’s TransRockies. “Before, it was like we can survive one year, no big deal, but now I think 2021 is kind of fifty-fifty if they go.

“When you don’t have an event for two years, it’s hard for the company to survive economically.”

Some endurance sports in the Bow Valley were able to provide virtual races this year to athletes.

However, Fleming said participation is down two-thirds across the board, even with the trendy style of racing.

"Every month, we’re just losing less,” said Fleming. “Virtual runs, all it does for most organizers is subsidize the losses.”

For the remainder of 2020, CESA is encouraging its members apply for grants where they can and to speak to local MPs.

“We’re really in an education and awareness phase, so people know that there’s an industry hurting and that we need help and we also want to have a seat at the table to understand how we’re getting back to play, how we’re getting Canadians back to events,” said Fleming.