Canmore Minor Hockey has come out against an idea floated by administration at the Town of Banff to convert Arena 2 at the Fenlands Rec Centre into an indoor field house, whereas Canmore Minor Soccer is supporting the proposed change
Sep 25, 2020 10:00 AM By: Jordan Small 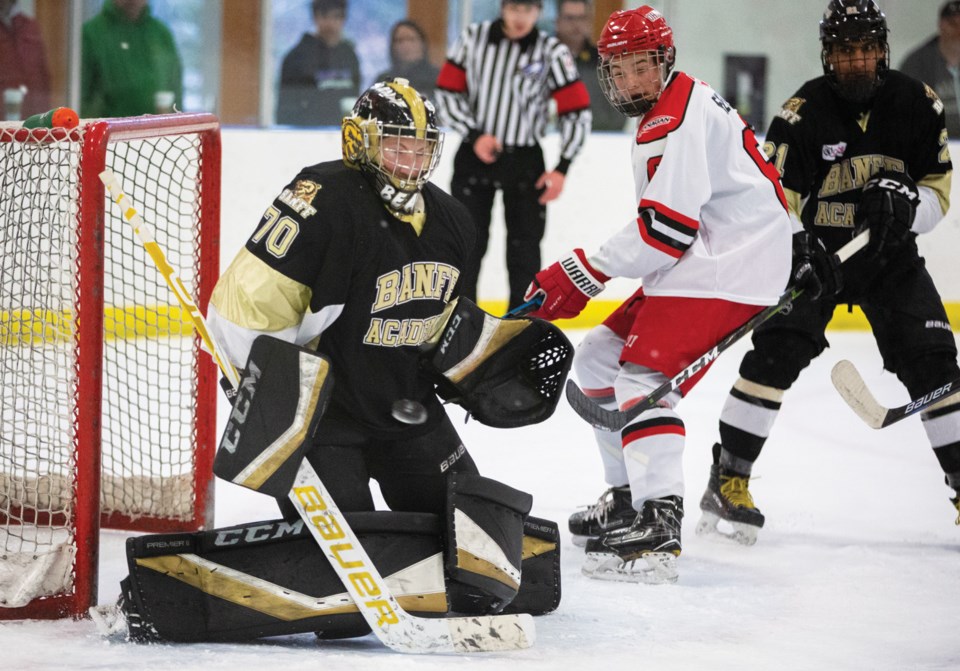 Banff Hockey Academy’s goaltender Jean Berthaudin makes a save during a game against Okanagan Red at the Fenlands Banff Recreation Centre. The Fenlands was redeveloped in the 2010s, it was built to include the Banff Hockey Academy (BHA) operations, but last May, BHA sold and relocated to southeastern Alberta and its lease at the facility was terminated. RMO File PHOTO

BOW VALLEY – A controversial pitch to convert an ice rink at Fenlands Banff Recreation Centre into a year-round field house has at least one local sports group thinking it’s time for something new in the Bow Valley.

On Monday (Sept. 21) at the Banff council meeting, Canmore Minor Hockey Association (CMHA) spoke against Banff administration’s pitch to retrofit Arena 2 into a multi-use dry surface, proposed at a governance and finance committee meeting in July.

Coming forth as a delegation, CMHA said the Town’s pitch, which included a proposed blueprint layout of a retrofitted arena, could “negatively impact” ice user groups that use the Fenlands.

“Currently, [CMHA] holds seven hockey tournaments that raises over $80,000 a year for our organization and we receive over 700 applications,” said Adam Macleod, vice president of CMHA.

“The need for tournament available ice is evident in the Bow Valley and we can’t do it all with just the rec centre in Canmore.”

CMHA has 300 players and 23 teams that require 101 ice slots in the valley and its president, Michael Hay, said the organization and Fenlands have kept a strong partnership, but thinks a potential conversion of Arena 2 could adversely affect them and other user groups. Last year, CMHA booked $49,000 worth of ice time at Fenlands and has booked $44,000 for the upcoming season.

When the Fenlands was redeveloped in the 2010s, it was built to include the Banff Hockey Academy (BHA) operations. The academy contributed $120,000 per year on average in facility rental revenues for the Town.

Last May, BHA sold and relocated to southeastern Alberta and its lease at the facility was terminated. The absence of BHA at Fenlands opened a discussion on the arena space and its best use for the community.

To date, there hasn’t been community consolation or direction from council about long-term future use at Fenlands. For the interim, Arena 2 will be a dry surface this winter season after COVID-19 shut down after-hour use at local school gymnasiums where drop-in and organized leagues would normally practice and play.

Canmore Minor Soccer will be one of the leagues applying to use dry space at Fenlands if they can’t secure any in Canmore this winter. The soccer league’s president Stephen Steel said the debate at Fenlands and its long-term use is relevant for Canmore as well, as the growing town is in need of an indoor multi-use facility.

“We just need space for user groups for adults and kids,” Steel said. “And as we grow [as a town] especially, we need these types of spaces.”

During winter months, Canmore Minor Soccer used local school gyms, such as at Lawrence Grassi Middle School, to hold practices. But due to the pandemic and precautions being taken at schools, Steele thinks it’ll be a few years before that opens up for rent again to the public.

“We feel we would be able to practise inside if it wasn’t a school board owned or managed property, so now there’s [currently] no winter programming for kids,” he said.

With space in the geographically challenged town at a premium, one of the biggest issues for building some sort of multi-use indoor facility in Canmore is where to do it. Steel thinks the best option would be an addition at the Canmore Rec Centre.

“The Town [of Canmore] needs its own space so they can disinfect it and have its own space and the ability to control who goes through it,” he said.

“We’ve got to look a bit long-term here for the town for having this space for our kids and even adults too.”

For Banff, a motion was passed in August directing administration to return to the Governance and Finance Committee by no later than October with a financial debrief on the Fenlands.