With the Canadian Rockies filling in admirably for the Italian Alps, Kananaskis had its first taste of GranFondo riding, Saturday (July 9) on Highway 40.
Jul 14, 2011 12:00 AM By: Rocky Mountain Outlook 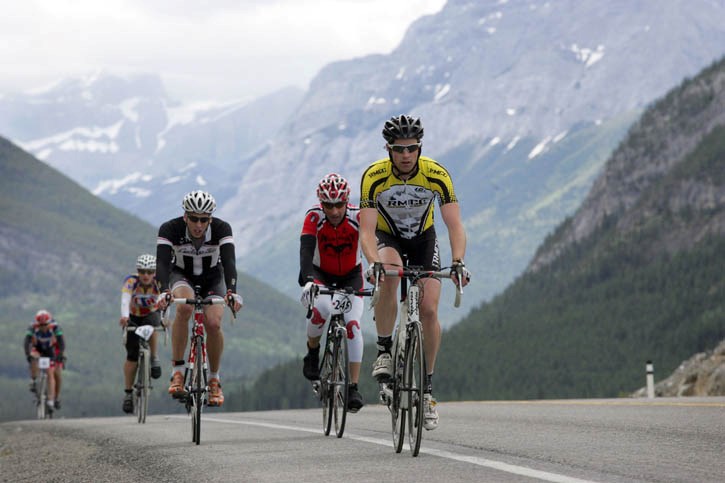 Rundle Mountain Cycling Club rider Matt Jeffries sails away out front during a blustery Gran Fondo, which travelled from Longview to the Stoney Nakoda Casino Saturday (July 9) via the amazing scenery of Highwood Pass and Highway 40.

With the Canadian Rockies filling in admirably for the Italian Alps, Kananaskis had its first taste of GranFondo riding, Saturday (July 9) on Highway 40.

Matt Jeffries, who will move to Canmore in two weeks, was the first to cross the finish line at the 147 kilometre mark. Jeffries rides with the Rundle Mountain Cycling Club and stopped the clock in 4:45:01 after battling strong headwinds and steep climbs from Longview to the Stony Nakoda Casino.

Scaling the highest paved road in Canada at 2,200 metres, a group of seven stuck together to lead the race past the apex.

“The first section had a wicked headwind,” Jeffries said. “There was a group of us at the front sharing the lead and I just happened to be in front at the end.”

Teamwork was required to fly through the mountain pass.

“You try to stay sheltered and not spend too much time in front,” Jeffries said. “It wasn’t really a race, but more of a long training ride.”

Leading up to the event, Jeffries would typically clock a 150-km ride once a week.

“It’s a good event. There’s a bit of a lull in the road bike schedule at this part of the year,” Jeffries said.

Calgary’s Cal Zaryski was first up the Highwood Pass, winning the actual hill climb race portion of the event while earning the monarch of the mountain award.

“There was a strong group that took off. We worked together for 40 kms, but we were moving around a lot. The wind gusts made it spooky and on the climb, the group dropped to 20,” Zaryski said.

Partway through the climb, he broke away from the pack with fellow rider Don King.

“We were working well together and when it came to the final climb I had a little bit more,” he said.

GranFondo rides are designed to be inclusive, placing less emphasis on time and more on finishing. With that attitude, several members of Canada’s women’s alpine team took part in the event, although only one braved the solo ride.

Marie-Michelle Gagnon, one of Canada’s rising stars on the alpine circuit, finished the race in 6:05.57. She partnered up with boyfriend Travis Ganong of the U.S. ski team to challenge the 147 kms of pavement.

“It’s one of the things I’ve wanted to do in my life, but I’ll be sleeping all day tomorrow,” Gagnon said.

Ganong had a spill and flat tire about a half hour into the race following a collision with another rider, but was luckily carrying a spare and was able to carry on with Gagnon.

Gagnon said she’s more of a mountain biker, and with training in Canmore most of the summer she’s been busy shredding the Highline and G8 trails, but hasn’t spent much time on her road bike.

“Mountain biking is more like alpine. I only got into road biking through ski racing. But this ride was great. The downhill was very fast and the scenery was gorgeous,” Gagnon said.

The rest of the women’s team competed as a relay, so they didn’t record an official time. Alpine Canada president Max Gartner also biked about half of the race.

At the urging of Alberta Alpine’s Adam Hull, Thomas Grandi also competed in the event. Decked out in bright blue Italia colours, Grandi stayed with the lead pack as long as he could before fading after the ,2200 m climb at the top of Highwood Pass.

“With the headwind at the start it was easy to stay with the pack and I tried to stick with them as long as I could,” Grandi said. “But it’s not really a race. The event has a nice vibe and lots of nice volunteers.”

Transitioning from skis to wheels, Grandi’s next venture will see him compete in the 24 hours of Adrenalin, followed by the TransRockies TR4 race.