Ellie Greenwood doesn’t stop running – even for interviews. With no evidence of heavy breathing or sputtering, the ultramarathoner answers questions with ease while she cranks up the speed on her treadmill.
Oct 27, 2011 12:00 AM By: Rocky Mountain Outlook 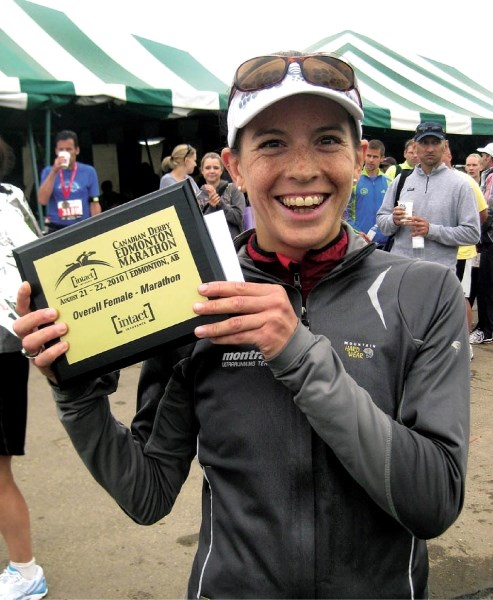 With no evidence of heavy breathing or sputtering, the ultramarathoner answers questions with ease while she cranks up the speed on her treadmill. After another successful run circuit that included her first 100 mile race in June, Greenwood plans to slow down for the winter… sort of.

“I hope to race again in January if I can,” she said.

Greenwood started the fall season with a disappointing DNF at the world championships, where she pulled out of the 100 kilometre race with 10 km to spare in October. She suspects she may have over-hydrated in the Netherlands, which hosted a humid race.

“To be honest, I ran out of gas,” Greenwood said. “That was not the race I was hoping for. But it was just one bad day and that’s what I focus upon.”

Greenwood said she was originally furious to pull up short with only 10 km to go, but her body refused more fuel, and she has come to terms with the result.

“The world championship was very disappointing, but it’s a risk you take. I’ll try again another time,” Greenwood said.

In order to overcome her loss, Greenwood did the sensible thing – she ran some more.

She traveled to Paris, Ont. for the Run for the Toad Canadian National Championships. It was her fourth time running the race and Greenwood managed to take the win. Unfortunately, since she’s not a Canadian citizen, the native of Scotland could not take the crown, but was thrilled with the race regardless.

“My friends encouraged me to go and it’s a way to encourage new runners.

Greenwood made short work of the course with a time of 3:38:01 – 28 seconds slower than last year, but good enough for top female and second place overall. After running around Banff for much of the summer, Greenwood found the farmland in central Ontario rather flat.

“It’s a very undulating course with gentle rolls. But when you’re used to Banff, you could say it’s flat,” Greenwood said.

In order to get over two flat races in a row, Greenwood wrapped up her 2011 running season in Chile on Oct. 15 at the Ultramaraton de los Andes, a 50-mile race around the mountain peaks near Santiago, the capital city of Chile.

The trail combined 4,100 m of elevation gain that had Greenwood up mountains, staring down at the skyscrapers of Santiago below.

The race was her prize for winning the 2010 Death Race in Grande Cache last year. The North Face-sponsored race took care of Greenwood in what proved to be a successful first visit to South America.

“Chile was amazing. I was really impressed with how well it was organized,” Greenwood said.

Peering out over the Andes, Greenwood found herself running solo for large portions of the 80 km race, which was difficult when the trail disappeared, she said. However, her mindset was different than at the world championship a month before.

“I went to enjoy it first and said if I feel ready to race, I will,” Greenwood said. “I had so much fun coasting along.”

She took the lead early and was sure she would get caught through the climbs.

“It was a tough course with lots of elevation. It took me nine and a half hours for 80 kilometres, so that shows you what the elevation was like,” Greenwood said.

Frost was on the ground when the race started, however, it turned into a beautiful day in which Greenwood took the title.

She rewarded herself with some time in Chile after the race and said she’d be open to returning.

“The people were so friendly. I don’t speak Spanish, but managed to get by,” Greenwood said.

After the trip, Greenwood said she’ll take some time to recover.

“It’s tempting to do a lot of (ultra-marathons), but the worst is to feel exhausted, so I’ll recuperate a little.”

Looking back at her season, she’s proud of her results, especially since she got her first 100 mile race under her belt.

“It was in California and was a day to remember: It took 18 hours for 160 kilometres. I didn’t move into the lead until kilometre 155. I hope to learn from my mistakes for next year.”

She also managed to survive the season with no major injuries and hopes to keep running more races next year.

Now back to the treadmill…