When Danelle Kabush was running cross-country races for the University of Washington, she would don spikes and sprint across the rolling golf courses littered across the state.
Jul 14, 2011 12:00 AM By: Rocky Mountain Outlook 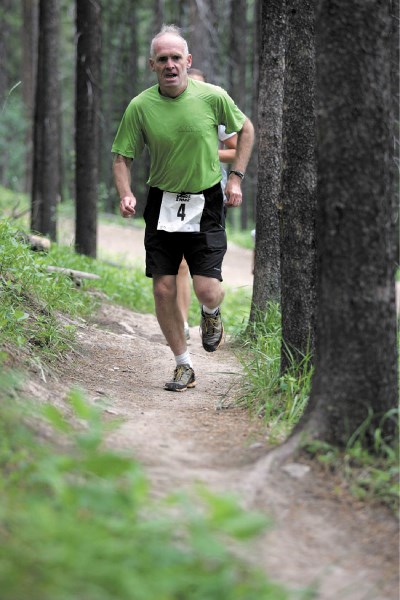 When Danelle Kabush was running cross-country races for the University of Washington, she would don spikes and sprint across the rolling golf courses littered across the state.

The experience did not prepare her for the grinding trail running course that awaited her at the Canmore Nordic Centre, however. But Kabush persevered to win her first-ever trail running competition – completing the rolling 8-kilometre race in 42:21.7, taking the lead on the second lap and refusing to relinquish it.

The event served as a qualifier for the Canadian national trail running team, however, Kabush, an Xterra triathlete and lifelong runner, used the event as a warm-up for the rest of her season.

“It was a good training day. The course had good climbing and descents,” Kabush said. “It wasn’t like the golf courses.”

Kabush has her PhD in sports psychology and is considered one of the top Xterra triathletes in the world. She’s won three Xterra World Championship medals, racing against the best off-road triathletes from around the globe and hopes to compete once again at that level in 2011.

Although she runs the race every year, Scallion said it never seems to get easier.

“It was tough because I thought it was only two laps, but then I found out it was three laps,” Scallion laughed. “Every year they set up the course and make it more challenging. But anytime you’re on the podium, it’s a good race.”

The national qualifier alternates every year between a rolling course and a steep climp, however, almost every competitor said the run was particularly difficult.

Imrie used the race to finish a gruelling training block and said the downhill was particularly tough on the legs.

“We ran up Sulphur Mountain this week and taking the gondola down was easier on the knees than this,” she said.

She’ll spend the next week recovering, sitting on her porch learning Feist songs on her guitar before the next training block takes the biathlon team in search of snow.

The race was his first ever trail running competition and he managed to lead start to finish. His hands sticky with pine-pitch after swinging on trees through the run, he said the race was a brutal challenge.

“I’ve never run a trail race, so I didn’t know what to expect,” said Gosselin, who’s logged thousands of hours on his cross-country skis and bike this year in preparation for a trip to the Commonwealth Games. “The last pitch on the climb made it tough.”

Gosselin blasted out at the start and put a 45-second gap on national trail running team member Chris Swanson, however, the Canadian team veteran narrowed that lead to 16 seconds on the last lap. Gosselin found himself far enough ahead by the final stretch to claim victory.

Contending with the 1,200 metre altitude change from Timmins to Canmore proved to be an adjustment, but he emerged as a fan of the course.

“There were a lot of sharp corners, but you just line up your shoulders and hang on,” Gosselin said.

Finishing second was Swanson, considered one of the favourites heading into the race. His goal this year was to run his own race and not get caught up in a sprint from the start, costing him down the stretch.

“It was a good, fun course. I typically like downhill,” he said.

For the past two weeks, Swanson has been training in Canmore in preparation for the run. Chagrined by second place, he still wants to earn a trip to the Commonwealth Games and will compete in the world trail running championships in Albania.