The fearless men of alpine skiing often burst with bravado and swagger at the world cup season opener in Lake Louise.
Nov 30, 2017 12:00 AM By: Rocky Mountain Outlook 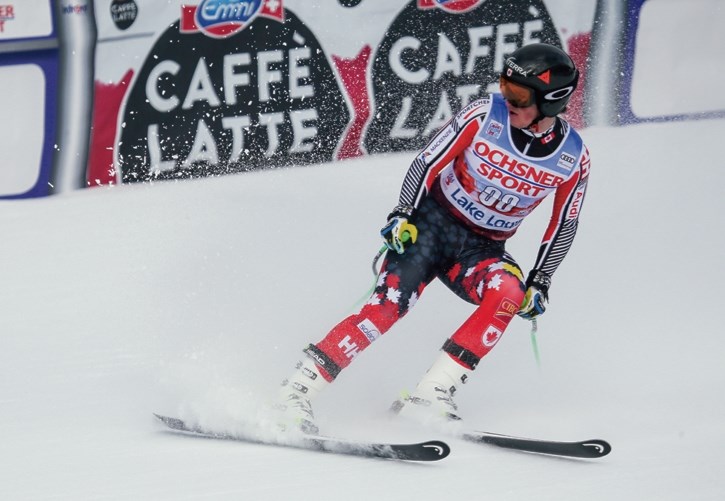 The fearless men of alpine skiing often burst with bravado and swagger at the world cup season opener in Lake Louise. They joke easily, smile for the cameras and speak as if the minute-forty-five they spend hurdling down 825 metres of icy track at 110 km/h was mere child’s play.

Yet at the world cup season debut Saturday (Nov. 25), cutting through the Audi and orange juice commercials was a palpable sentiment of loss for recently fallen French skier David Poisson.

Poisson was killed two weeks ago (Nov. 13) in a training accident at Nakiska Ski Resort, reportedly crashing through safety netting and hitting a tree. At 35, the French skier was a mainstay on the world cup circuit.

In Lake Louise, skiers wore heart shaped stickers on their helmets paying tribute to him. World champions waxed eloquently about him and the French team kept close to one another, pointing skyward after their runs, and wearing bibs honouring their teammate.

“It was really difficult, but we go step by step. It’s good for us. It’s good for David. For sure, it wasn’t easy to start today. But we love our sport and we need that,” said French sker Adrien Theaux.

Switzerland’s Beat Feuz narrowly edged Austria’s Matthias Mayer by nine one hundredths of a second to win the downhill race. Norway’s Aksel Lund Svindal finished third, 0.32 back of the lead.

“I’m really happy to see the whole ski family stick together, and the French team participate today. The stickers on the helmet is a beautiful gesture to remember David,” Feuz said through a translator.

“Everyone is pretty sad. We signed a banner for him this morning. It’s really emotional for the French team, but we needed to get ski racing … He’s one of our boys. It’s just a shame and it’s too bad that happened in our sport. It’s happened before. We know the risks,” said Canadian Manuel Osborne-Paradis.

On the snow, Feuz skied clean and fast to take the day. It was his second medal in Lake Louise, as he won silver in 2011.

Osborne-Paradis was the top Canadian, as he finished 20th.

“Technically, I skied how I wanted to ski. There were a few things I could have done to be faster, but my skiing is where I need it to be … Mayer took more risks than I was prepared to take, but that’s skiing,” Osborne-Paradis said.

Erik Guay pulled out of the race after tweaking his back. He’s struggled with back pain for weeks.

Broderick Thompson finished 23rd for the best world cup result of his young career and the top-30 result takes him one step closer to the Olympics. Thompson is the brother of ski cross star Marielle Thompson.

“I just pushed pretty hard out of the start and tried to link up some nice turns,” Thompson said. “(The Olympics) is always on my brain. Since I was a little kid, I wanted to go.”

Hearts remained heavy, with the gestures important, yet the fraternity of skiers spoke of how the constant remains the sport.