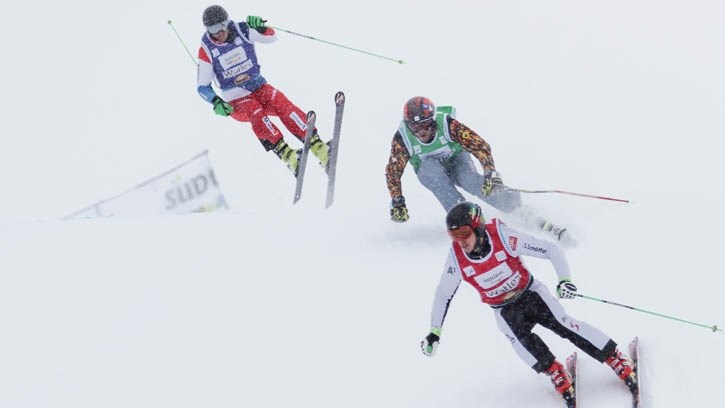 Helie just missed the podium and finished fourth, while Mahler punched in a 12th-place finish.

Helie took a big risk while charging for the first ski cross podium of his career, but fell just short.

“I knew that if I ended up fourth coming into the last straight, I had a chance to pass, so I came into it with a huge draft and was gaining really fast on the second and third guy, but I missed the triple at the bottom and lost all the speed. It was still a photo finish, but I knew I didn’t have it,” Helie said.

In retrospect, Helie was satisfied with his performance, but is hungry for more.

“It’s fun to be in the finals. It’s been a goal of mine for four years to be in the spot I was today, and I really thought I could win it,” Helie said. “I had some good fight in me all day and in the end, I think I was thinking about the podium a little much. All in all, I’m really happy I stuck with my plan. It’s a bit bittersweet because I let I slip away, but I’m really happy I made it to the final.”

Coming off a 16th-place finish in Nakiska, Mahler improved again with a 12th-place spot. Brady Leman and Chris Del Bosco finished 5th and 6th respectively in the small final.

It was a great day for the Canadian team as a whole, as Marielle Thompson had her fourth win of the season, as she continues to chase the Crystal Globe. The win was the 13th of her career.

“I tried to ski my best all day today and be patient with the course. There were opportunities to make big moves on the bottom portion of the track which I capitalized on a couple of times today,” Thompson said.

The team is now heading to South Korea for an Olympic test event. As the competition is heating up for Olympic spots, Canada will have several choices to make over the next two seasons.