The Canmore Eagles have battled injury problems all season long and the past weekend was no different. “In all my years of hockey, I’ve never seen it as bad as this,” said head coach Andrew Milne.
0
Jan 27, 2011 12:00 AM By: Rocky Mountain Outlook 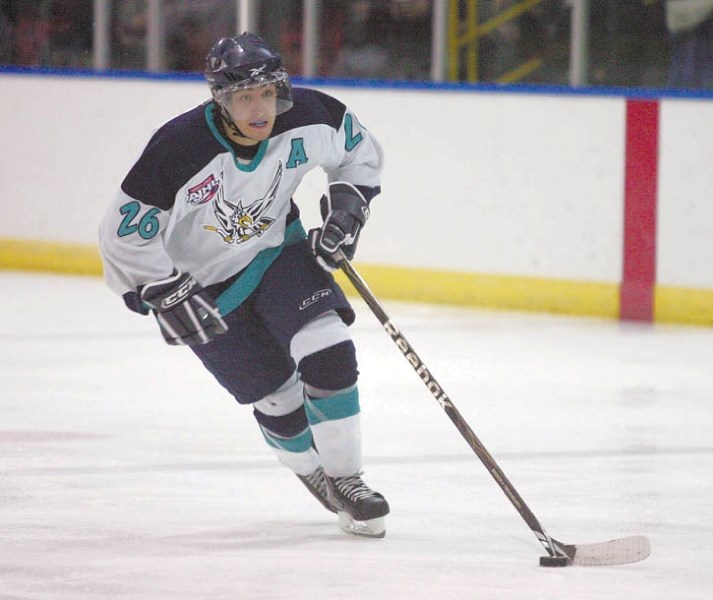 Cody Cartier suffered a wrist injury against Drayton Valley. He will have it examined before the Jan. 28 game against Brooks.

The Canmore Eagles have battled injury problems all season long and the past weekend was no different.

“In all my years of hockey, I’ve never seen it as bad as this,” said head coach Andrew Milne.

The team was only able to dress eight forwards on the road trip that took them through Grande Prairie and Drayton Valley.

Despite an overflowing medical ward, the Eagles downed Drayton Valley 6-2 on Saturday (Jan. 22), but lost 5-2 to Grande Prairie on Jan 21.

On top of missing Zack Rassell, Riley Point, Tyler Horton, Keegan Thompson and Ben Bitz, Cody Cartier and Brian Doust both had their ice time cut due to injury. Doust’s shattered kneecap gave him problems again on the road trip and Cartier took a vicious slash to the wrist and will have it examined before tonight’s (Jan. 27) home game against Olds.

“I think we played well in both games. We were disciplined against Grande Prairie. They’re a physical team and I’m proud of the way our guys played,” Milne said.

The injuries, though, did give other players a chance to step up. Defenceman Trey Phillips was moved to forward, while Connor Hoekstra and Carson Brown were given more ice time.

“Hoekstra was outstanding against Drayton Valley,” Milne said. “He’s such a well-conditioned athlete, he can handle it when we give him more ice.”

With 10 goals as a 17-year-old, Hoekstra is expected to play a big role with the team in years to come.

Milne also said Davis Claffey has stepped up and played a strong game. He’s getting comfortable with his return to forward.

“The back end was great in both games. It’s been really great and allows us to have a power forward on the top lines,” Claffey said.

Dalton Olsen opened scoring for the Eagles against the Thunder at the eight minute mark, with Steven Phee and Willy Sakal drawing assists.

Hoekstra scored his tenth of the season less than two minutes later, with Cartier drawing the assist for a 2-0 lead.

Drayton Valley got one back by the end of the period, but the Eagles dominated the rest of the play. Phillips scored his second of the season on the powerplay for the only goal of the second. In the third, Brown netted his first of the year, with help from Cartier and Kory Roy.

Roy then potted one of his own – his team-leading 26th of the season – with Mike Zgraggen and Cartier assisting. Ciaron Driscoll finished off the scoring for the Eagles with his second of the year. Steve Papciak stopped 24 shots for the win.

Drayton Valley only has six wins this season, but Milne said it was still a hard-fought win.

“When you only have seven forwards, and put the travel on top of that, it was a difficult team,” Milne said. “We’ve got to get healthy.”

The Eagles will also add two Canmore players for Thursday’s game. Simon and Luke Philp are both expected to dress for the Eagles. Luke Philp was recently added to Team Alberta, and played last season with the Airdrie Xtreme. This year, he’s skating with the UFA Bisons midget AAA team in Strathmore, and has 42 points in 28 games. Simon is also playing for the Bisons, and has 16 points in 28 games.

On Friday (Jan. 28), the Eagles are in Brooks to take on the Bandits.

The Canmore Eagles suffered a 4-1 loss to the Oilers in AJHL action in Okotoks, Tuesday (Jan. 25).

Dalton Olsen scored the Eagles’ lone goal in the third period, with an assist from Josh Martin.